A strong storm off the Pacific Northwest will continue directing a stream of heavy rain, high elevation snow and gusty to high winds over much of central and northern California, the Sierra Nevadas and the Great Basin Monday, October 25, 2021. Thunderstorms associated with isolated wind damage are possible over parts of the southern and central Appalachians into the Carolinas and Middle Atlantic region today.

"Evacuations were ordered, roads were closed and hundreds of thousands of people were without electricity Sunday night as a powerful storm roared across parts of California and the Pacific," Jan Wesner Childs of TWC reports.1

Heavy rains resulted in flash floods and several landslides, including one in the Dixie Fire burn scar that shut down Highway 70 near Tobin in Plumas County.

Landslide on Hwy 70 near Tobin, Ca has the highway shutdown and will likely be for a long duration. #CAwx #wxtwitter #AtmosphericRiver pic.twitter.com/MlBVa19Dyl 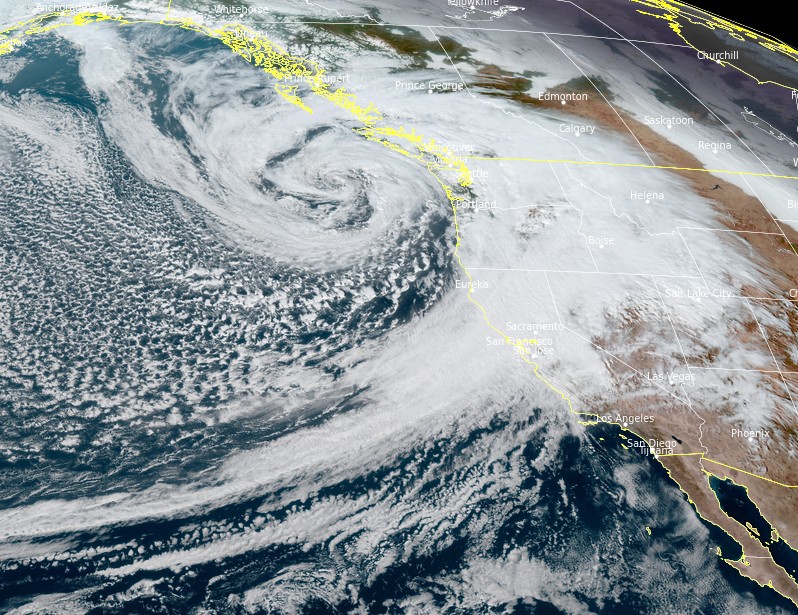 10.2 mm (4.02 inches) of rain was recorded in downtown San Francisco on the same day, making it the city's wettest October day ever — the previous October rainfall record was 6.2 mm (2.48 inches) set on October 13, 2009. This was also the 4th wettest day ever in San Francisco since records began.

A strong storm just west of the Pacific Northwest Coast will impact the West Coast over the next several days, NWS forecaster Ziegenfelder noted at 20:06 UTC on October 23.2

Strong onshore flow will stream moisture into Northern/Central California, producing heavy rain and snow over parts of California. Therefore, the WPC has issued a High Risk of excessive rainfall over the Sierra Nevada Mountains through Monday morning. 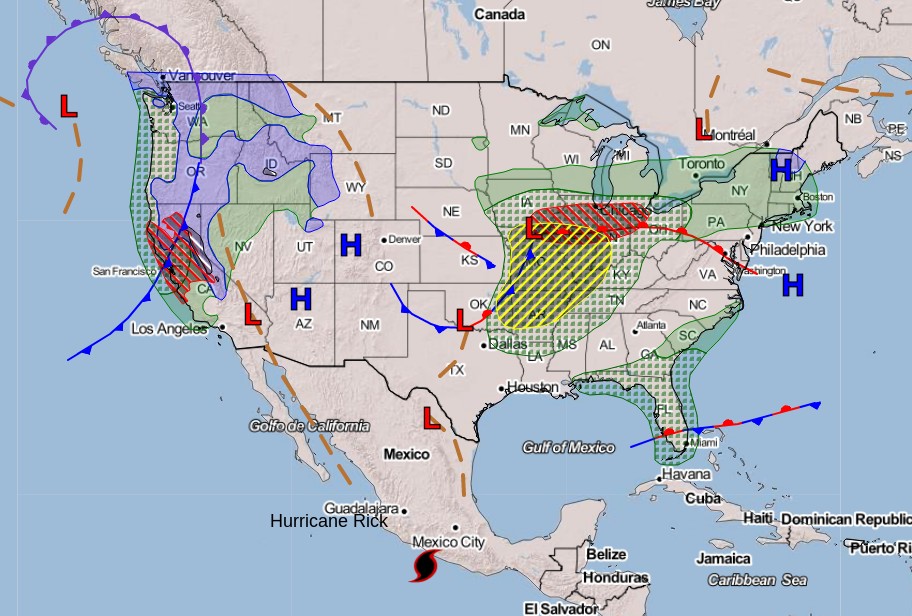 Moreover, rain and highest elevation snow will develop over parts of the Pacific Northwest into the Northern Intermountain Region and continue into Monday. On Monday, after the front passes, the snow levels will lower over the Northwest portion of the country. On Tuesday, rain and higher elevation snow move into the Rockies, with rain developing over parts of the Northern/Central High Plains by Tuesday evening.

The Storm Prediction Center has issued an Enhanced Risk of severe thunderstorms over parts of the Middle/Lower Mississippi and Ohio Valleys through Monday morning.

Additionally, there is a 10% or greater probability of 5 cm (2 inches) or larger hail over parts of northeastern Missouri through Monday morning.

However, the severe thunderstorm threat is not the only threat over the Midwest. Heavy rain will develop along the front, therefore, the Weather Prediction Center has issued a Moderate Risk of excessive rainfall with the rain and thunderstorms over parts of the Ohio Valley through Monday morning. The associated heavy rain will create numerous areas of flash flooding — many streams may flood, potentially affecting larger rivers.