Pamela regained hurricane strength as its center came closer to the coast of Mexico on October 13, 2021. The system is forecast to make landfall on the west-central coast of Mexico this morning (LT) and life-threatening storm surge and dangerous hurricane-force winds are expected within the Hurricane Warning area. Residents in this area should follow any advice given by local officials, NHC said.

On the forecast track, the center of Pamela will make landfall in west-central Mexico within the hurricane warning area later this morning and move inland over western Mexico later today. 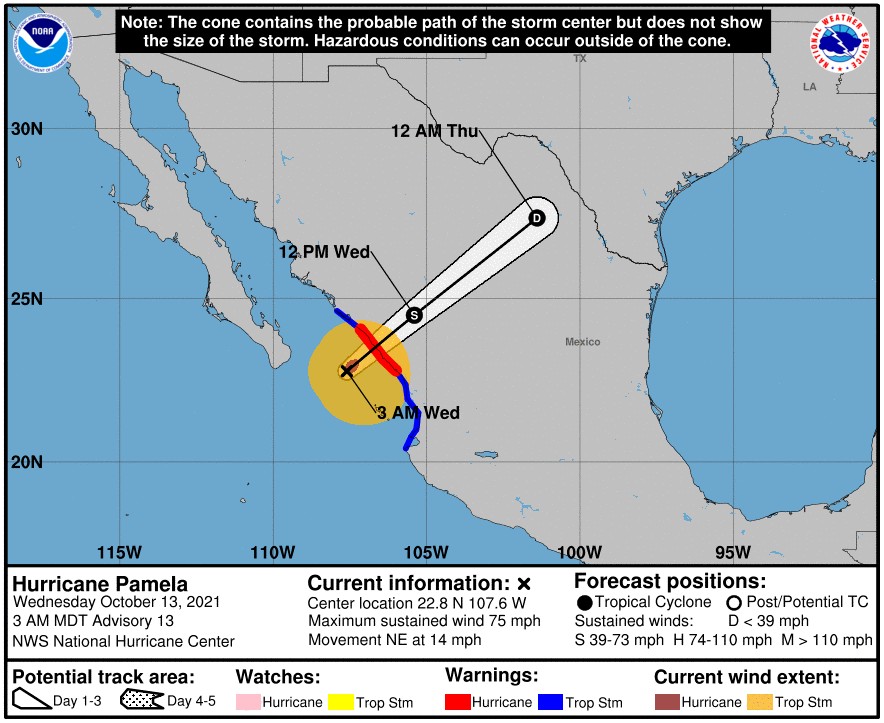 Storm surge is expected to produce significant coastal flooding in areas of onshore winds near where the center of Pamela makes landfall in southwestern Mexico. Near the coast, the surge will be accompanied by large and destructive waves.

Hurricane conditions are expected within the Hurricane Warning area in a couple of hours, with tropical storm conditions continuing to spread over portions of the coast.

Through Thursday, October 14, Pamela or its remnant is expected to produce the following rainfall amounts:

Across the Mexican States of Sinaloa, western Durango, and northern Nayarit 100 – 200 mm (4 to 8 inches) with isolated maximum totals of 300 mm (12 inches). This rainfall may trigger significant and life-threatening flash flooding and mudslides.

Across portions of central Texas and southeastern Oklahoma 75 to 150 mm (3 to 6 inches) with isolated maximum totals of 200 mm (8 inches). This may result in considerable flash and urban flooding impacts.

Swells generated by Pamela will continue to affect portions of the southern Baja California peninsula, as well as southwestern and west-central mainland Mexico through today. These swells are likely to cause life-threatening surf and rip current conditions.