Seismic observations suggest that M7.5 earthquake1 that struck South Sandwich Islands at 18:32 UTC on August 12 is a part of a complex seismic sequence.

"Our current interpretation is that this earthquake is a foreshock to a M8.1 that occurred about 170 seconds later. Research is being conducted on this sequence to better understand the faulting geometry and details of rupture. This analysis will take time and our understanding will likely evolve," the USGS said.

The location, depth, mechanism, and magnitude of this earthquake are still preliminary and less well constrained than typical events of this size due to interference from the preceding M7.5 foreshock, the agency added. 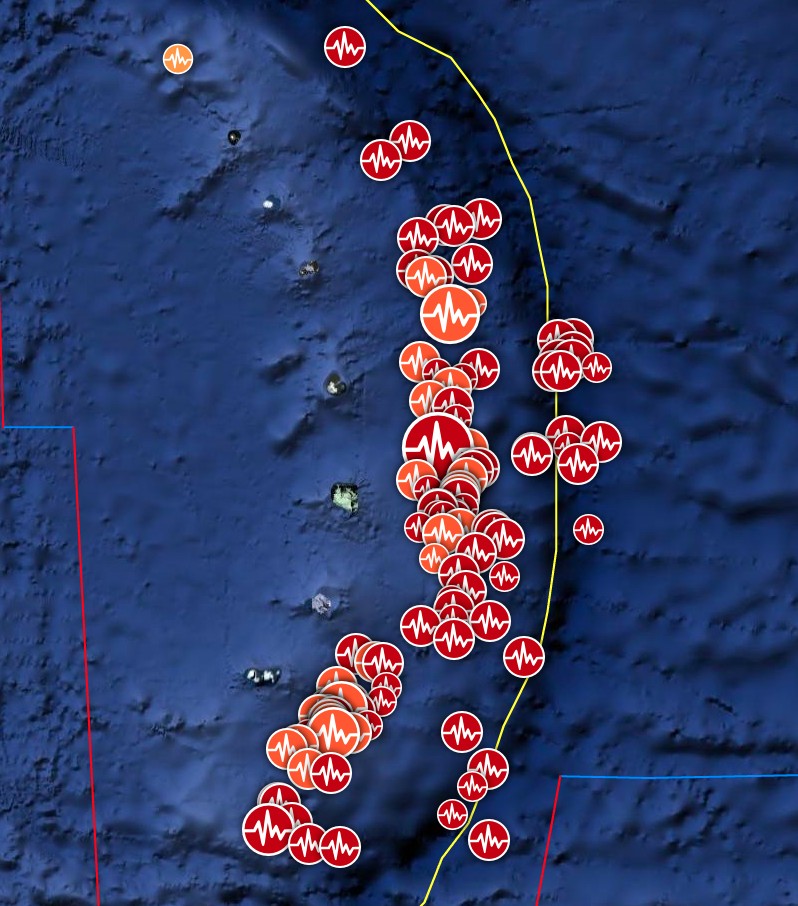 The current understanding of the August 12 M8.1 earthquake in the South Sandwich Islands is that it occurred as the result of reverse faulting at approximately 48 km (30 miles) depth in the Scotia subduction zone, according to the USGS tectonic summary report.2

Note that in this location, the subduction zone interface dips to the west.

The depth and the mechanism of this event are consistent with the earthquake rupturing within the subducted South America plate (an intraplate earthquake), rather than on the interface between the two plates.

Given the temporal proximity of these two large earthquakes, however, a faulting mechanism for the M8.1 mainshock is difficult to accurately constrain due to the overlapping seismic waves.

While commonly plotted as points on maps, earthquakes of this size are more appropriately described as slip over a larger fault area. Events of the size of the August 12, 2021 M8.1 earthquake are typically about 150 km x 75 km (93 x 46 miles) in size (length x width).

Over the previous century, eight other M7+ earthquakes, including the M7.5 foreshock, occurred within 250 km (155 miles) of the M8.1 earthquake.

The largest of these previous earthquakes was an M8.1 in May 1964.

M7+ earthquakes in the South Sandwich Island region have historically occurred at intermediate-depths (broadly defined as 70 – 300 km / 44 – 185 miles depth). However, the largest earthquake in the region was a shallow (~10 km / 6 miles deep) M8.1 earthquake on June 27, 1929 that was located about 450 km (280 miles) northwest of the August 2021 M8.1 earthquake along the northern boundary of the Scotia plate with the South America plate.

None of these earthquakes are known to have caused fatalities, likely because of their remote location far from population centers that might be vulnerable to earthquake shaking.

In the 24 hours following the M8.1 mainshock, the USGS located 61 aftershocks of M4.5 or greater.

The aftershocks span a trench-parallel distance of about 470 km (290 miles), stretching from the M7.5 foreshock southward to the triple junction between the South America, South Sandwich, and Antarctica plates.

Preliminary locations for a subset of the aftershocks are located east of the trench indicating the potential presence of outer rise earthquakes, which occur as a result of downward flexure of the subducting slab.