More than 3.8 million homes are experiencing power outages across the U.S. state of Texas and another 118 000 across Louisiana, 58 000 in Mississippi, and 163 000 in Alabama, North Carolina, Virginia, West Virginia, and Kentucky after extremely cold temperatures and frozen precipitation blanketed parts of U.S. South, crippling transportation and infrastructure. Texas Governor Gregg Abbot issued a statewide disaster declaration on February 12, warning all residents the state faces an unprecedented winter storm.

All 254 Texas counties were placed under Winter Storm Warning on Saturday, February 13, the same as in Oklahoma and Arkansas on Sunday. 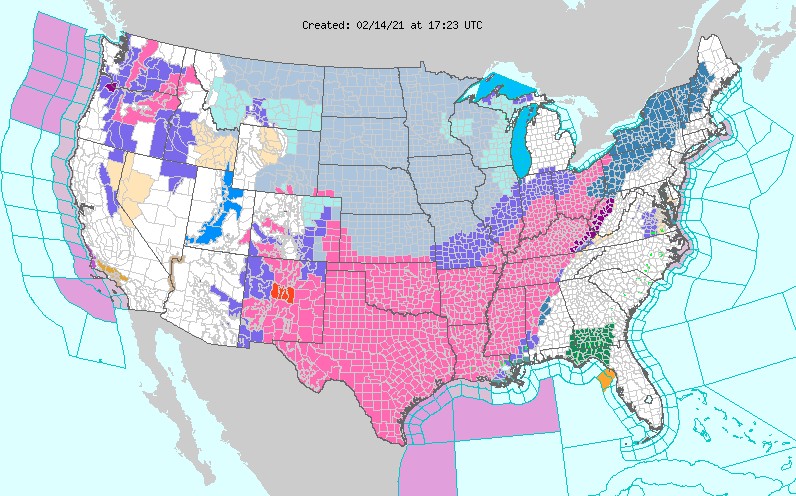 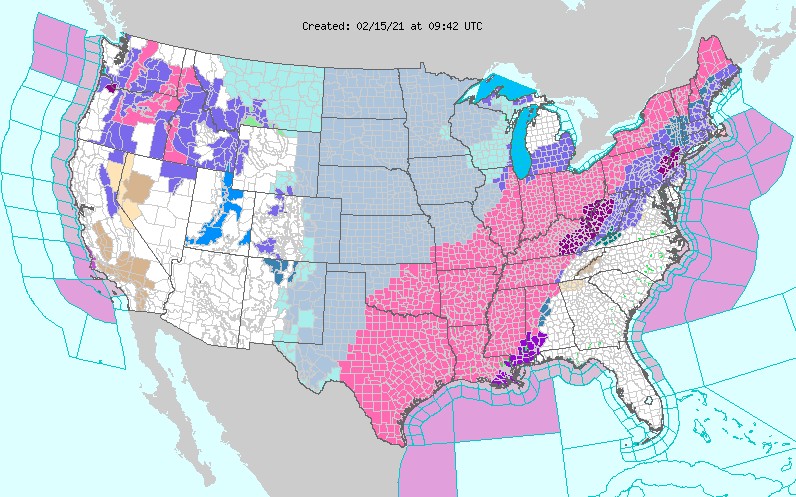 One day after record-breaking energy use across Texas on Sunday, February 14, 2021, the Electric Reliability Council of Texas (ERCOT) declared an 'energy emergency alert three' — EEA 3 — the third of three alert phases.

In the first phase, ERCOT looks to get electricity from other grids; in the second stage, large industrial users who've agreed to cut power in emergency situations are shut down; and in the third phase, the operator starts running rotating outages to reduce demand on the electric system.

Rolling blackouts, typically lasting from 15 to 60 minutes, could repeat all the way through Tuesday morning.

"We urge Texans to put safety first during this time. Traffic lights and other infrastructure may be temporary without power," ERCOT officials said.

The supply of natural gas to power plants was limited on Sunday, and half of the system's wind turbines had frozen hours before the state set a new winter peak demand, reaching 69 150 MW between 18:00 and 19:00 LT. This is more than 3 200 MW higher than the previous winter peak set back in January 2018.

The last time the state implemented rolling outages was in 2011 — also due to cold, ice, and snow — but this time cold temperatures are expected to last for a longer period of time.

"This impressive onslaught of wicked wintry weather across much of the Lower 48 is due to the combination of strong Arctic high pressure supplying sub-freezing temperatures and an active storm track escorting waves of precipitation from coast-to-coast," Mullinax explained.

While the current areas of snow and wintry mix over parts of the Southern Plains will conclude later this morning, bitterly cold temperatures will limit the amount of melting today, and thus treacherous travel conditions are likely to persist.

Heavy snow and freezing rain are forecast to advance northeastward today from the Mississippi and Ohio Valleys to the Northeast.

A large swath of 150 – 300 mm (6 to 12 inches) of snow is forecast from the Ohio Valley and eastern Great Lakes to northern New England.

South of the heavy snow axis, freezing rain is expected to cause a plethora of problems with over 2.5 mm (0.1 inches) of ice in the forecast from far east Texas northeastward to southern New England.

Significant ice amounts of 6 – 13 mm (0.25 – 0.5 inches) are expected in portions of the Lower Mississippi Valley and the Mid-South leading to dangerous travel conditions, numerous power outages, and extensive tree damage.

The aforementioned Arctic high across the central U.S. is forecast to slowly moderate as the week progresses, but still maintain a firm and icy grip over the Heartland to open the week.

Teeth-chattering cold temperatures are expected to continue between the Rockies and Appalachians through Tuesday with lows in the -20s °F (-29 °C) and -10s °F (-23 °C) for the Northern/Central Plains and Upper/Middle Mississippi Valley.

Temperature anomalies are likely to be 14 – 25 °C (25 to 45 °F) below normal for much of the central and southern Plains today with a carbon-copy of similar anomalies expected again on Tuesday.

In addition, Wind Chill Warnings and Advisories reach as far south as the Southern Plains and as far east as the Ohio Valley.

Hundreds of daily low maximum and minimum temperatures have been/will be broken during this prolonged polar plunge, with some February and even all-time low-temperature records in jeopardy.