A catastrophic rock and ice avalanche took place in the Chamoli district of the Indian state of Uttarakhand at around 05:00 UTC on Sunday, February 7, 2021. The event took place around 500 km (310 miles) N of New Delhi, leaving more than 150 people dead or missing.

At first sight, it appeared to be a glacial lake outburst flood (GLOF) but it was later determined to be a rock and ice avalanche caused by a landslide.

"The question as to the cause of this event has been solved by the availability of a Planet Labs image collected today," Dr. Dave Petley of The Landslide Blog wrote in his analysis of the event. 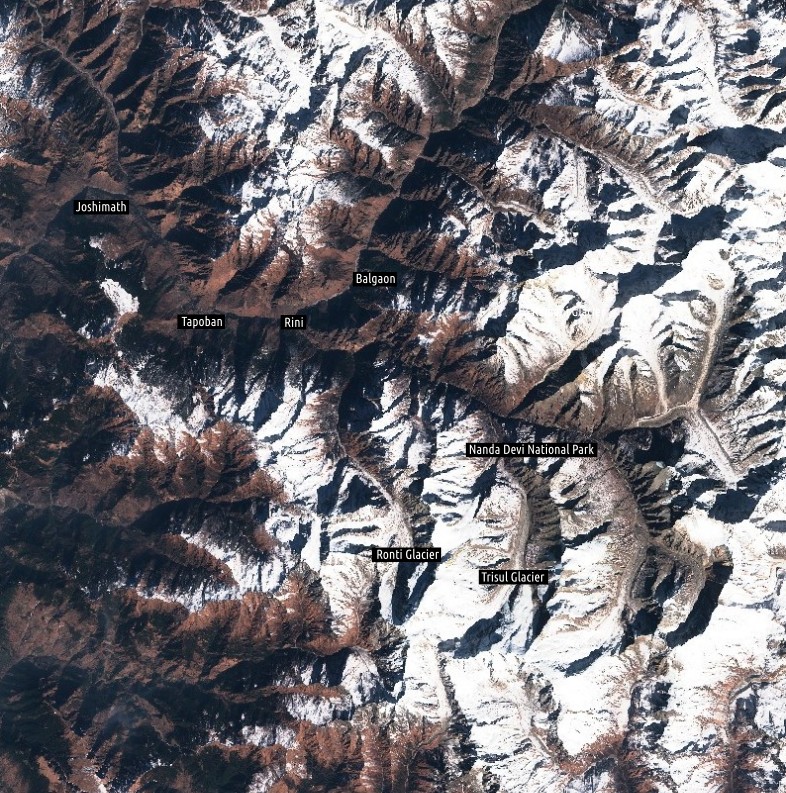 The affected area as seen by Sentinel-2 satellite on February 5, 2021 – two days before the event. Image credit: Copernicus EU/Sentinel-2, TW

Dr. Dan Shugar of the University of Calgary was the first person to deduce from this that the cause of the disaster was a landslide, Petley said.

PlanetLabs images posted on his website show the source of the disaster – a large rockslope detachment from Trishuli.

"It has moved northwards onto the glacier, and turned into a rock and ice avalanche that has moved toward the northwest."

3D rendering of @planetlabs image collected 7th Feb showing the source of the Uttarakhand disaster located by @WaterSHEDLab. Appears to be a complete detachment of a previously glaciated slope #Chamoli #Disaster #Landslide pic.twitter.com/SElrZh36kH

This looks like it could be from a (unnamed?) glacier flowing from Trisul peak. @planetlabs imagery from Feb 7 (L image) shows lots of dust/moisture in the air (same as in the videos), which is not present on Feb 6 (R). @BhambriRakesh @davepetley @irfansalroo https://t.co/mjetRxZb0V pic.twitter.com/5deVDWnRo3

The Rishiganga Hydroelectric Project in the Tapovan-Rini area, with more than 150 workers believed to be in the facility, was completely destroyed.

Only 10 bodies have been recovered so far.

The debris also swept away homes, bridges, and livestock along the way and trapped 16 people in a tunnel near Tapovan who were later rescued.

State utility NTPC said a part of its Tapovan Vishnugad hydropower plant that was under construction was also damaged.

The event played out so fast there was no time to alert anyone, one of the locals told Reuters.