A major winter storm is expected to significantly impact much of the Mid-Atlantic and Northeast on Wednesday into Thursday, December 16 into 17, 2020.

"The biggest weather story over the next few days will undoubtedly be from a major winter storm that is set to bring an overabundance of hazards from the Mid-Atlantic to the Northeast," NWS forecaster Snell noted at 07:28 UTC on December 16.

The driving factors behind this storm include a deep upper-level trough currently swinging across the Mid-South, an area of low pressure developing off the Southeast coast, and a strong arctic high pressure system located over southern Quebec, Snell explained.

This will result in an expanding area of snow over the Ohio Valley, central Appalachians, and northern Mid-Atlantic today. 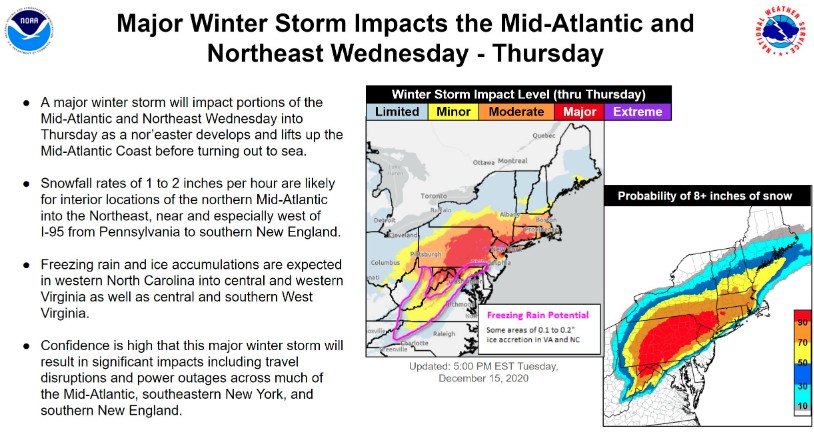 Between the snow in the north and the rain in the south, a wintry mix is forecast to stretch across the southern Appalachians and the interior Mid-Atlantic roughly along the I-95 corridor.

Freezing rain is the main concern across this region, as upwards of 6.3 mm (0.25 inches) of ice accretion is possible. This could lead to scattered tree damage and power outages, Snell warned.

As the precipitation shield advances north throughout the day, heavy snow will overtake areas northwest of I-95 in the Mid-Atlantic.

This means major cities, such as Washington D.C. and Philadelphia, will likely see a wintry mix and potentially plain rain for areas just to the southeast.

Heavy snow will also encroach upon much of the Northeast and southern New England this evening, including New York City and Boston.

The storm is expected to strengthen off the New Jersey coastline tonight, with strong northeast winds likely leading to coastal flooding from Delaware to Cape Cod.

Flooding will also be possible across portions of the Mid-Atlantic where temperatures are too warm for wintry precipitation. 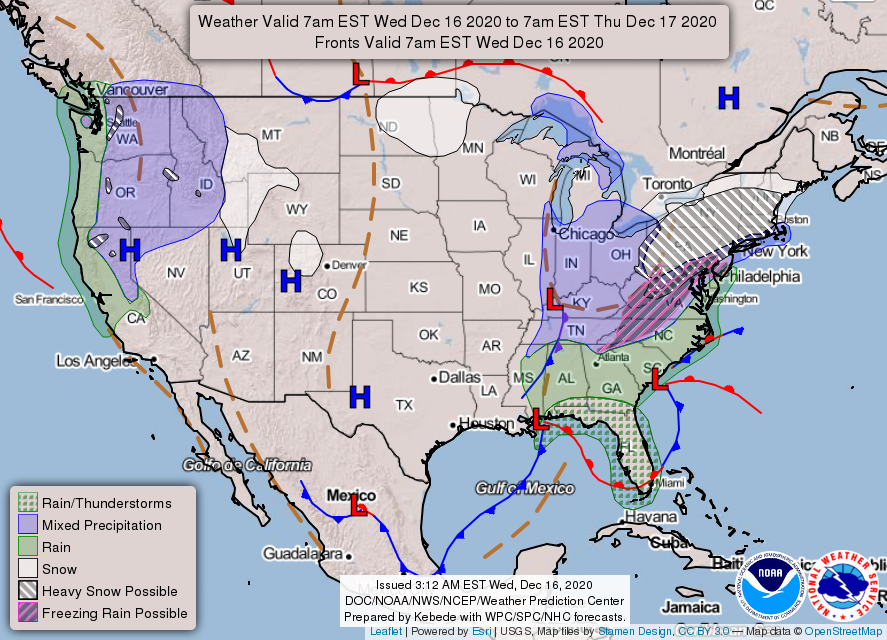 "In case that wasn't enough, severe thunderstorms could bring damaging winds and isolated tornadoes across the Outer Banks in eastern North Carolina this afternoon," Snell said.

The heaviest snowfall amounts from this system are currently forecast across central Pennsylvania, where as much as 60 cm (2 feet) of snow is possible. This will likely lead to very dangerous, if not impossible, travel conditions and isolated power outages.

Many locations from eastern West Virginia to far southern Maine are forecast to see 30 cm (1 foot) of snowfall accumulation. In certain areas, this would be more snow in one event than was seen all of last winter.

Snowfall amounts are expected to drop off dramatically to the south and east as sleet and rain are expected to mix in. There is still some uncertainty regarding the exact alignment of the rain/snow line, as substantially different weather conditions could be found just a few km apart at times.

"On the heels of the major winter storm that will bury much of the mid-Atlantic and portions of the Northeast with over a foot of snow, some exceptionally cold air for mid-December will linger later on Thursday, Thursday night and Friday," said AccuWeather Senior Meteorologist Carl Babinski.

Many areas will have temperatures as low or lower than what is typical in January, which is the coldest month of the year on average, AccuWeather said.

This will allow the snow to stick around for several days. Melting will take place in some places during the day, only to freeze again during the night.

This freeze/thaw cycle is likely to continue through the weekend, especially in areas that receive over 150 mm (6 inches) of snow.

Elsewhere, much of the snow may melt by the end of the weekend.