More than 10 m (32 feet) of snow accumulated in parts of southern Norway by July, according to the BKK energy company, who is conducting clearing operations to prevent flooding in the mountains. The region is currently so cold that the snow is hardly melting, but the situation could change with heavy rainfall, causing rapid melting.

"We have not had such [heavy] snowfall as this year," said Knut Kinne, watercourse technical manager at BKK. 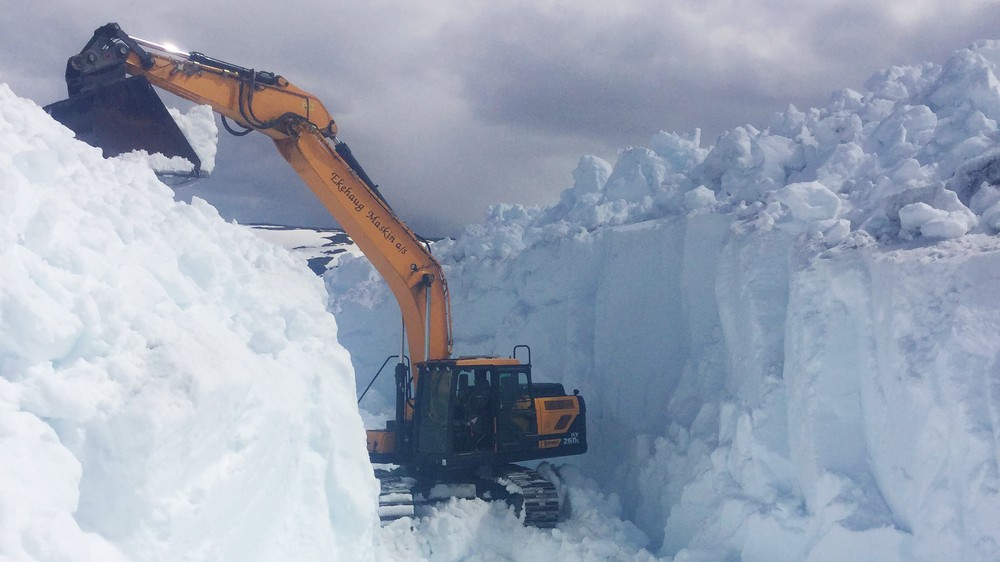 Even with all the snow removed from the channels, Kinne is not sure there won't be floods in the region. There can be large amounts of rainfall causing rapid melting and risking overflow, he explained.

"It can be quite local in the mountains if it melts intensely, but it is not something we see immediately on meteorological forecasts," hydrologist Knut Ola Aamodt said.

According to the Norwegian Water Resources and Energy Directorate (NVE), the flood warning is currently green as the region is currently so cold that the snow is hardly melting.

Cold winds have brought rare July snow to several northern parts of #Norway. Just over a week ago, the country was sizzling in record temperatures.
Here's Oppland county at the moment  pic.twitter.com/K1JXl4EHhe

In early July, 35 cm (14 inches) of snow fell in some parts of the country. While accumulations of about 5 cm (2 inches) are possible in July, totals of more than that are almost unheard of.

Three major roads that link east and west Norway were disrupted, and drivers were urged to revert to using winter tires.

35 cm of fresh snow in mountains over Bergen in Norway
What it looks like at the Folgefonna ski centre in Jondal (about 1200 m asl) on Friday, July 3rd. https://t.co/EQeFKL41V5https://t.co/sJ9bK6uJ6Y pic.twitter.com/zFGCds0euW

We drove through many tunnels. Norway has plenty of tunnels. Then we went up again to over 300m. We saw some snow and clouds  pic.twitter.com/aiKwmJEMTA

Has come snow in the north in Norway the night that was pic.twitter.com/gVIqxHhJTz