An annular solar eclipse will take place on Sunday, June 21, 2020. This is one of the most breathtaking celestial events when the Moon partially obscures the Sun, allowing a "ring of fire" on its edges. The eclipse will start several hours after the solstice.

The annular solar eclipse occurs when the Moon is farthest away from the Earth in its orbit, thus, appearing smaller in our skies, relative to the Sun.

The difference in apparent size is what sets annular eclipses apart from full eclipses– when the nearer position of the Moon (with its average radius of  800 km or 1 000 miles) makes it look the same size as our star (with a radius of around 696 000 km or 432 000 miles).

A stunning example of this was taken by photographer Colin Legg and astronomy student Geoff Sims in Western Australia in May 2013. The ring of fire is seen being distorted by the Earth's atmosphere.

A complete ring of fire will be visible from central Africa through Asia, while many other areas, from southern Europe to the northern portions of Australia, will see a partial annular eclipse.

The instant of greatest eclipse takes place at 06:40 UTC, with the Sun in the constellation Taurus. This is 6.2 days after the Moon reaches apogee.

The synodic month in which the eclipse takes place has a Brown Lunation Number of 1206, NASA's Fred Espenak aka Mr. Eclipse noted. The eclipse belongs to Saros 137 and is number 36 of 70 eclipses in the series. All eclipses in this series occur at the Moon’s ascending node. The Moon moves southward with respect to the node with each succeeding eclipse in the series and gamma decreases.

At the peak of the eclipse, the Moon will obscure 99.4 percent of the Sun as the pair puts a spectacular display across the skies of northern India.

At 05:30 UTC on June 21, join astrophysicist Gianluca Masi with live contributions from countries in Asia and Africa at www.virtualtelescope.eu. 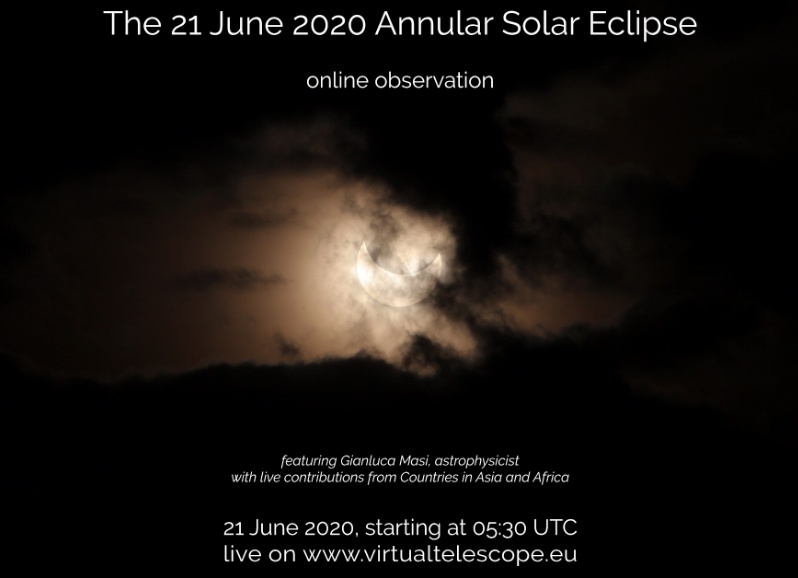 Slooh will also provide live coverage of this event, starting at 05:00 UTC.