A tropical cyclone is forecast to develop from a tropical low off the northwest Kimberley coast in Western Australia on Thursday, February 6, 2020, according to the Bureau of Meteorology (BOM). As of Wednesday, February 5, the low has sustained winds near the center of 35 km/h (22 mph) with gusts to 85 km/h (53 mph), moving west at 14 km/h (9 mph). The agency warned that a severe cyclone impact is likely on Saturday, February 8. Once formed, the system will be named Damien.

While southern WA is experiencing severe heat conditions this week, residents in the north particularly the Pilbara coast were advised to prepare for a tropical cyclone impact.

"We will see this tropical low move off the Kimberley coast today and it is likely to reach tropical cyclone strength during Thursday morning," said BOM.

For the past four days, this slow-moving low has dumped nearly 200 mm (8 inches) of rain to several areas in the Kimberley. A flood watch remains in place for the rivers in the region's north and west.

A gale warning was also issued for the region's west for Thursday, while strong wind warnings will be issued for the Pilbara Coast East, Leeuwin Coast, Albany Coast, and Esperance Coast.

According to BOM, the tropical low is moving over an area of very warm sea surface temperatures. Furthermore, the atmospheric environment is conducive to cyclogenesis.

"It is very possible that we will see this system, which will be called a tropical cyclone Damien, reach severe category 3 cyclone strength and maintain at least this strength as it crosses the coast over the weekend," the agency warned.

A tropical #cyclone expected to develop off the northwest Kimberley coast on Thursday. The Pilbara coast can expect gales from later Friday and a severe cyclone impact is possible on Saturday. See https://t.co/B1MVXBYXhh pic.twitter.com/Dp8Yzd0GKk

On Wednesday, the system is expected to move westwards. Heavy rainfall is likely to continue over the northwest Kimberley, while gusty weather is expected over the Dampier Peninsula, north of Broome, into Thursday.

On Friday, it is forecast to turn towards the Pilbara Coast, with a coastal crossing between Port Hedland and Exmouth most probably at this stage.

Destructive winds with wind gusts to 150 km/h (93 mph) may develop overnight Friday as the cyclone moves near the coast, increasing further on Saturday.

"Abnormally high tides could cause serious flooding at the coast between Dampier and Wallal on Saturday." 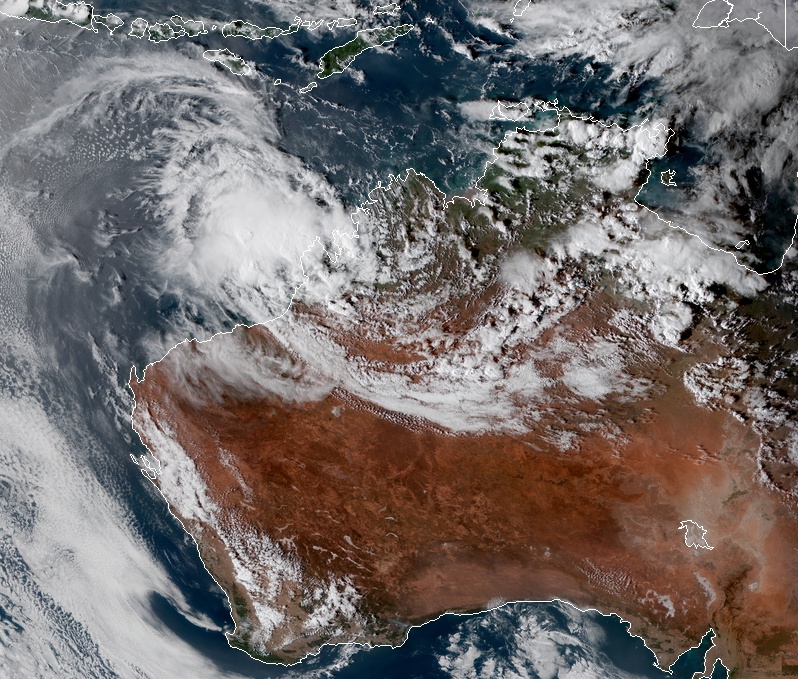