The Geminid meteor shower is expected to peak on December 14, 2019. At its peak, the shower can produce up to 120 multicolored meteors per hour.  However, the Moon will be only 4 days past full phase at the shower's peak, presenting significant interference throughout the night.

Depending on one's timezone, people may be able to see between 20 to 40 meteors per hour, according to astrophysicist Dr. Tayyaba Zafar.

The American Meteor Society (AMS) advised stargazers that to best see the Geminids, "you need to view as close to December 14th as possible."

"Like all meteors showers, there are many more faint meteors than bright ones. Eyes that had just stared at the moon or just came outside from indoors will not be able to see these fainter meteors. Give your eyes time [to] adjust to the darkness"

Unfortunately, there will be a nearly full moon in the sky as the Geminids peak, obscuring all fainter meteors by the bright moonlight and drastically reducing the number of meteors.

"It is also advisable to watch for as long as possible as meteor activity waxes and wanes throughout the night," AMS said. 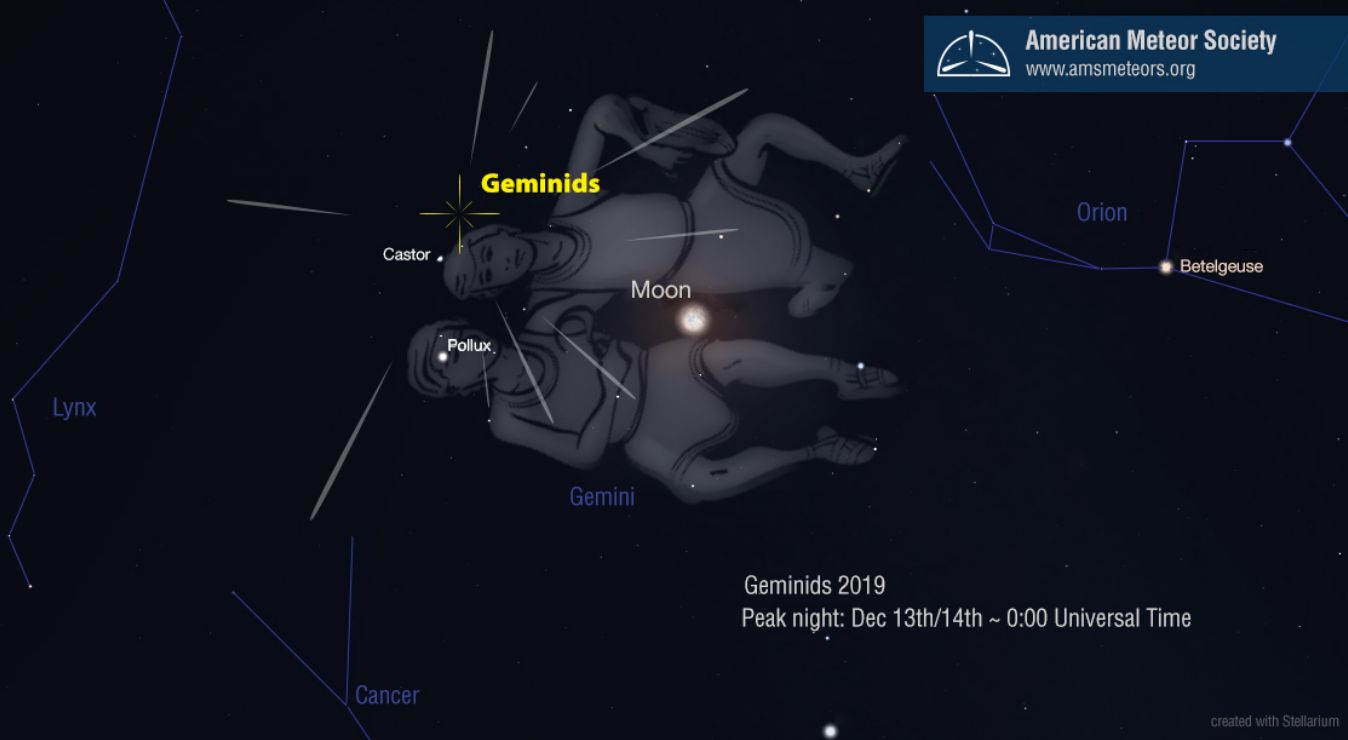 AMS advised stargazers that "in order to view for that long, you need to be comfortable so a lounge chair is recommended. Lie back and view at a 45° (halfway up) angle to see the most activity."

"You can face in any direction as Geminid meteors can be seen in any part of the sky. No matter what part of the sky they appear, they will all trace back to the radiant near the bright star known as Castor."

It is not necessary to know where Castor is located, but AMS said stargazers will soon learn as meteor after meteor will shoot forth from that direction.

Geminids are on the rise! If you want to know more about it and the other active meteor shower of the week, Bob Lunsford's Weekly Meteor Activity Outlook for December 7-30, 2019 is online: https://t.co/RVVYW9Y9Lu pic.twitter.com/bHABN87JLU

Dr. Zafar added that it's also best to look in the general north direction. She also suggested getting away from city lights, and the best chances of viewing would be getting near a national park.

The meteors that will be visible on the 14th and 15th are from asteroid 3200 Phaethon. The Geminids were first observed in 1862.