An international team led by researchers from the University of Pennsylvania, Beijing Institute of Technology, University of Helsinki and the University of Nebraska-Lincoln has found a missing link that affects haze formation in the atmosphere, providing new clues to air pollution forecast and control. Findings showed that alcohols such as methanol can produce particle formation by consuming sulfur trioxide (SO3), one of the major ingredients in the process.

Particles known as PM2.5 and PM10– small clumps of molecules in the lower atmosphere about 2.5 and 10 micrometers in size respectively– contribute to haze, clouds, and fog, and could be dangerous for the heart and lungs.

"Right now, we're all concerned about PM2.5 and PM10 because these have some real air-quality and health consequences," said Joseph S. Francisco, a corresponding author on the study and an atmospheric chemist in Penn's School of Arts and Sciences.

"The question has been, How do you suppress the formation of these kinds of particles? This work actually gives some very important insight, for the first time, into how you can suppress particle growth," he continued.

The researchers discovered that when combined with water molecules, SO3 forms sulfuric acid– a key component of acid rain and one of the most important chemicals for growing particles in the atmosphere.

However, the researchers realized that SO3 could react with alcohol like methanol especially when it is abundant in the atmosphere. This results in a sticky compound, methyl hydrogen sulfate (MHS).

"We and others have been studying this process of how particles grow so we can better understand the weather and the health implications," said Jie Zhong, a postdoctoral fellow at Penn and co-lead author of the paper.

"Previously people thought that alcohols were not important because they interact weakly with other molecules. But alcohols attracted our attention because they're abundant in the atmosphere, and we found they do in fact play a significant role in reducing particle formation."

The alcohols consume SO3, thus, less sulfuric acid is produced. 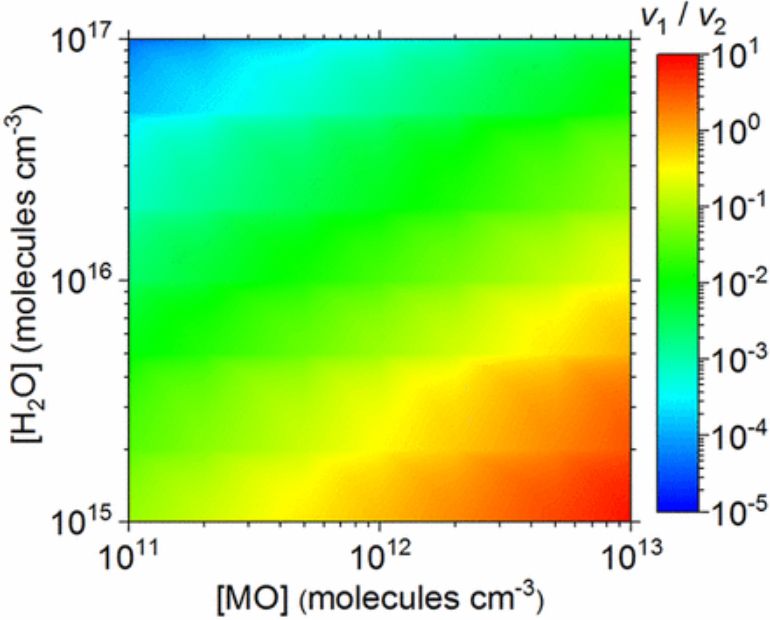 Researchers said although the reaction between methanol and SO3 requires more energy, the MHS itself could contribute to the methanol reaction.

When there's a huge amount of alcohol and SO3 in the atmosphere but water molecules are scarce particularly in dry and polluted conditions, this reaction may play a major role in driving down the rate of particle formation.

"Because this reaction converts alcohols to more sticky compounds," said Zhong, "initially we thought it would promote the particle formation process. But it doesn't. That's the most interesting part. Alcohols consume or compete for SO3 so less of it is available to form sulfuric acid."

"That was an interesting part for us, to find that the MHS can catalyze its own formation," said Francisco. "And what was also unique about this work and what caught us by surprise was the impact of the effect."

The researchers acknowledged as well that MHS has been linked to negative health impacts, but this new insight into particle formation provides data that can help produce more accurate models for air pollution and even weather and climate.

The next step for the researchers would be investigating how colder conditions involving snow and ice affect new particle formation.

"Unexpected quenching effect on new particle formation from the atmospheric reaction of methanol with SO3" – Liu, L. et al – Proceedings of the National Academy of Sciences – DOI: dx.doi.org/10.1073/pnas.1915459116

Despite the high abundance in the atmosphere, alcohols in general and methanol in particular are believed to play a small role in atmospheric new particle formation (NPF) largely due to the weak binding abilities of alcohols with the major nucleation precursors, e.g., sulfuric acid (SA) and dimethylamine (DMA). Herein, we identify a catalytic reaction that was previously overlooked, namely, the reaction between methanol and SO3, catalyzed by SA, DMA, or water. We found that alcohols can have unexpected quenching effects on the NPF process, particularly in dry and highly polluted regions with high concentrations of alcohols. Specifically, the catalytic reaction between methanol and SO3 can convert methanol into a less-volatile species––methyl hydrogen sulfate (MHS). The latter was initially thought to be a good nucleation agent for NPF. However, our simulation results suggest that the formation of MHS consumes an appreciable amount of atmospheric SO3, disfavoring further reactions of SO3 with H2O. Indeed, we found that MHS formation can cause a reduction of SA concentration up to 87%, whereas the nucleation ability of MHS toward new particles is not as good as that of SA. Hence, a high abundance of methanol in the atmosphere can lower the particle nucleation rate by as much as two orders of magnitude. Such a quenching effect suggests that the recently identified catalytic reactions between alcohols and SO3 need to be considered in atmospheric modeling in order to predict SA concentration from SO2, while also account for their potentially negative effect on NPF.