Another wave of severe thunderstorms hit central United States Wednesday into Thursday, May 22 into 23, 2019. The National Weather Service received 38 tornado reports over the past 24, of which one violent tore directly through Jefferson City, Missouri. There have been nearly 100 tornado reports across the central U.S. since Monday, May 20.

Three people were killed in Missouri's Barton County after a destructive tornado hit Lamar-Golden City area Wednesday night (LT). NWS said the storm that spawned the tornado fired up in Ottawa County, Oklahoma, touched down near Baxter Springs and Galena in Kansas and then moved into Carl Junction, Oronogo and Golden City, Missouri, but no injuries were reported before it moved into Barton County.

A violent tornado made a direct hit to Missouri capital Jefferson City around 23:45 CDT on May 22 (04:45 UTC, May 23). First responders worked through the night to begin search and rescue efforts for people who were trapped in collapsed buildings. Officials said 20 people were transported to hospitals.

With 3 casualties in Barton County, the death toll since May 20 now stands at 7.

2 people were killed in a traffic accident near Springfield, Missouri on May 21. 1 person was killed in Perkins, Oklahoma after driving around a high water warning barricade and into a flooded roadway on the same day. One tornado-related death was reported in Adair, Iowa early Wednesday, May 22. The Adair/Guthrie County Emergency Manager said one building was destroyed and two to three outbuildings were damaged on the farm, located just south of Interstate 80. 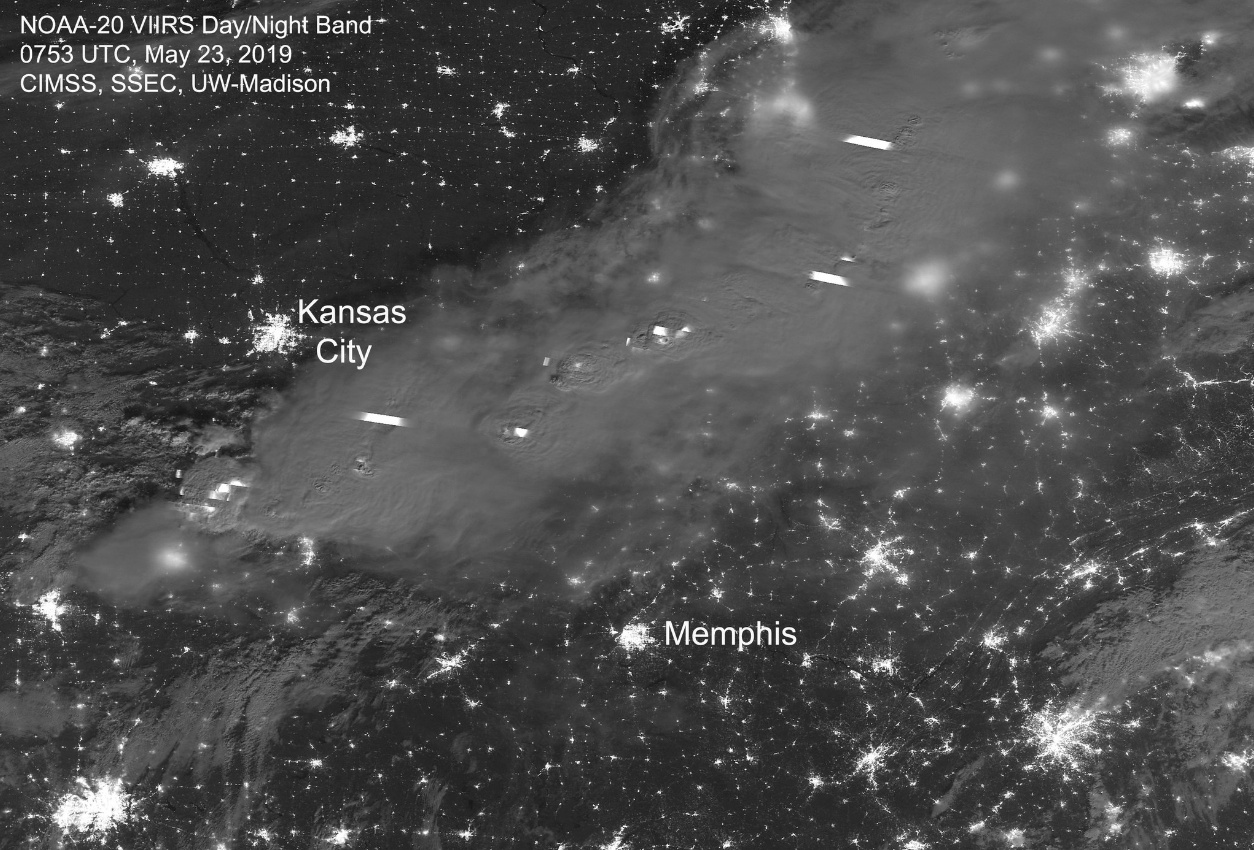 A nighttime view of severe storms in Missouri and Illinois, approximately 3 hours after Joplin and Jefferson City tornadoes. Credit: UW-CIMSS

A very active weather pattern is forecast to continue across the central part of the nation through the end of the week, NWS warns.

This is in response to an anomalous upper level trough situated over the Intermountain West and a large upper level ridge anchored over the southeastern U.S.

A clash of air masses from the southern Plains to the Ohio Valley region will support multiple episodes of bad weather in the general vicinity of a slow-moving frontal boundary with waves of low pressure developing along with it. 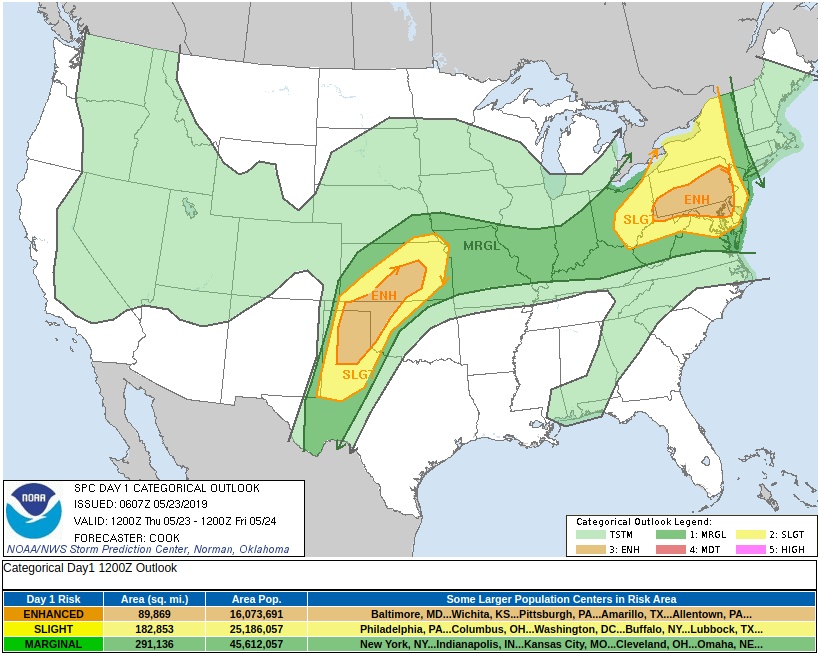 The first of these surface lows will cross the Great Lakes region on Thursday, May 23 and bring a cool front to the East Coast by Friday morning. In the warm sector of this low, severe thunderstorms will be possible from the Ohio Valley to the Mid-Atlantic and Northeast on Thursday.

After some lingering showers across New England on Friday, expect better conditions across the northeastern quadrant of the nation to end the work week, with slightly cooler conditions and lower humidity compared to Thursday.

The second low pressure system develops across the western High Plains Thursday night and lifts northeastward across the Upper Midwest by Friday evening, May 24. A corridor of enhanced rainfall along with severe weather is likely from the Texas Panhandle to Wisconsin over the next couple of days.

Flash flooding is possible across portions of the central plains during this time, and SPC has an enhanced risk of severe storms from northwest Texas to central Kansas on Thursday.