At least 8 people were killed after severe thunderstorms swept through the southern United States on April 13 and 14, 2019, producing flash flooding and at least 22 tornadoes in Texas, Lousiana, Mississippi and Alabama.

Two children were killed in Angelina County, Texas after a car they were in was crushed by a tree on April 13. On the same day, two people have been swept away after flash floods hit Ouachita Parish, Louisiana. One teenager died during flash flooding in the community of Bawcomville, Louisiana.

A county employee in Alabama was killed after he was hit by a vehicle as he was helping to clear downed trees near Birmingham. Another person was killed in Monroe County, Mississippi after an EF-2 tornado (preliminary) ripped through Hamilton.

NEW: Sunlight reveals the devastation left behind in Hamilton, MS where a tornado struck overnight.

One woman was killed in Caddo County after a tornado ripped through a Native American cultural festival. Houston County sheriff's office said another person was killed in a nearby town.

A large tornado with a preliminary rating of EF-3 hit the community of Franklin, Texas, on April 13, destroying 55 homes, 4 businesses, a church, a duplex and part of the local housing authority building.

More than a dozen people were injured in Alto, Texas, when a tornado damaged several structures, including the gym of the town's elementary school. 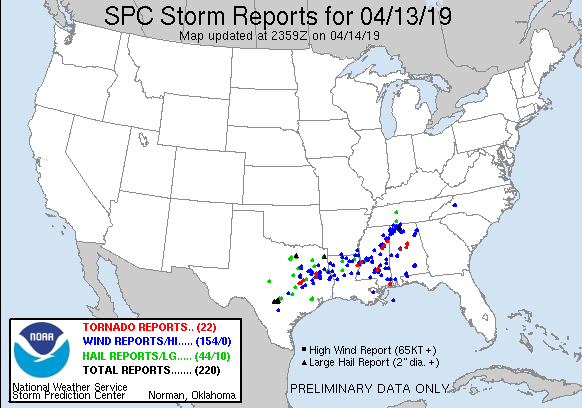 The storms left more than 150 000 customers without power across Texas, Missouri, Mississippi, Alabama and Louisiana.

A strong cold front pressing across the Eastern States will continue areas of severe thunderstorms and heavy rainfall from the Northeast to the Carolinas into early Monday morning, NWS said.

Damaging winds with some hail and a few night tornadoes will remain possible with the severe storms.

A renewed risk of severe storms is looking more likely from the eastern Plains Wednesday to the East Coast Friday, April 19.