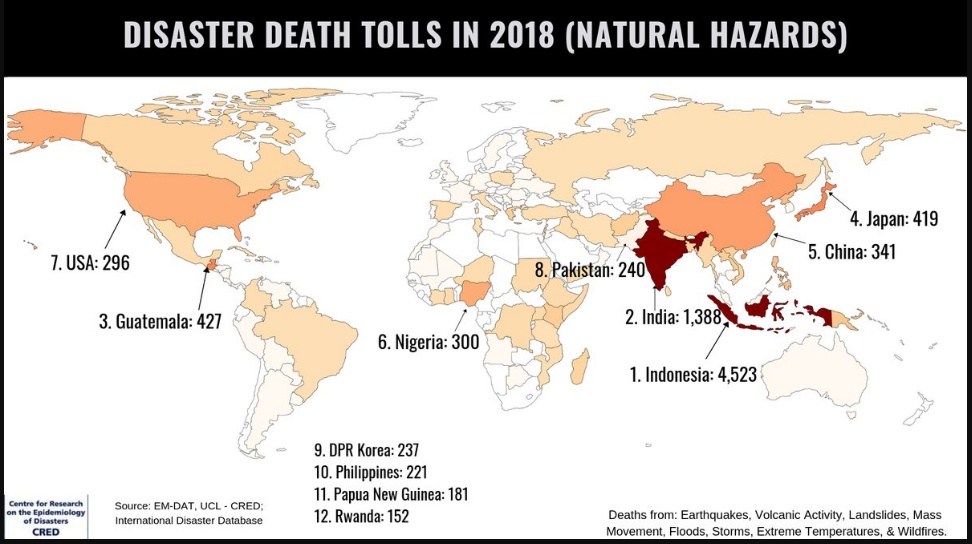 There were 281 climate-related and geophysical events recorded in the EM-DAT (International Disaster Database) in 2018. These caused deaths of 10 733 people and affected 61 million people across the world. There were a number of major disasters in certain regions, however, there were no mega-disasters which inflate yearly averages, such as the 2010 earthquake in Haiti, the Centre for Research on the Epidemiology of Disasters (CRED) who manages EM-DAT said. Earthquakes and tsunamis accounted for the majority of the 10 373 lives lost.

Notable features of the year were intense seismic activity in Indonesia, a string of disasters in Japan, floods in India, and a very eventful year in volcanic activity (which resulted in more deaths than have occurred in the previous 18 years combined) and wildfires. These events continued to occupy headlines, CRED said.

An ongoing trend of lower death tolls from previous years continued into 2018, potentially demonstrating the efficacy of improved standards of living and disaster management. However, it is critical to avoid complacency towards major gaps in data collection and reporting and resilience, particularly for climate-related disasters, which are forecasted to increase in both frequency and intensity.

The original file posted by CRED can be found at the following link.

Earthquakes and tsunamis have been the deadliest disaster in the 21st century and this trend continued in 2018. The concentration of the damage was in South-East Asia and Melanesia, specifically in Indonesia and Papua New Guinea respectively.

In the early months of the year, a string of earthquakes in Papua New Guinea left 181 dead, and affected over half a million people, many of whom lived in remote highlands which were difficult to reach by aid and rescue operations.

Every year, storms impact millions of people, and create billions of dollars (USD) in damage; 2018 was the same.

EM-DAT is awaiting final data on the economic damage from these events.

Overall, floods have affected more people than any other type of natural hazard in the 21st century, including 2018. Overall, there was a respite from floods in 2018, with Bangladesh, Pakistan, and Vietnam, which often face relentless floods reporting fewer events this year. However, major floods were reported in other countries.

In Somalia, which is already suffering from an ongoing conflict, over 700 000 people were affected by flooding, while in Nigeria, flooding cost 300 lives and impacted nearly four million people.

The August flooding of India’s Kerala state was by far the largest flood event of the year, with 504 dead, and two-thirds of the state’s residents affected (over 23 million people).

Currently, CRED is undertaking an epidemiological study in this region to investigate the impacts of the flooding on gender and disease.

Volcanic activity rarely makes headlines, and has had minimal impacts since the turn of the century; however, in 2018 this natural hazard resulted in more deaths than have occurred in the previous 18 years combined.

The direct impact of climate change on human populations will increasingly be felt through catastrophic phenomena, such as drought and extreme temperatures. The human repercussions of these events, as experienced by the EM-DAT team, are typically poorly reported, especially from low-income countries.

This is partly due to methodological difficulties in registering deaths and the severe consequences caused by droughts and extreme temperatures.

In 2018, three million people were affected by an ongoing drought in Kenya, while Afghanistan suffered a major drought that impacted 2.2 million people, causing the internal displacement of thousands.

In Central America droughts affected over 2.5 million people in Guatemala, Honduras, El Salvador, and Nicaragua, which coincided with international migration patterns. Across Europe, a hot and dry summer caused heatwaves and drought conditions that affected farmers and health systems in numerous countries.

Due to the privileged economic situation of many European countries, there are reduced impacts from persistent heat exposure and water shortages on the population.

With the growing impact of climate change, particularly in lower and lower-middle income countries, it is critical to improve the reporting on the human impact of droughts and extreme temperatures.

Across the world, the trend of devastating wildfires continued from 2017 into 2018. In 2018, the Attica Fires in Greece, killed an estimated 126 people, making it the deadliest wildfire recorded in Europe within EM-DAT records, both this current and previous century.

In the United States, the California wildfire season was the deadliest and costliest on record, with Camp Fire killing 88 people, the highest wildfire death toll in the country since the 1920s, and causing an estimated 16.5 billion USD in damage, the costliest wildfire event on record.