Tropical Cyclone "Nora" slammed into Queensland's Cape York Peninsula as a Severe Tropical Cyclone at 11:55 UTC (23:25 local time) on Saturday, March 24, 2018. BOM forecasters said heavy rain and possible flash flooding could continue across Cape York, Gulf Country, and NE Tropical Coast through at least mid-week. The cyclone is expected to move back offshore over the southern Gulf of Carpentaria, re-intensify and make another landfall on the NT/QLD border, just south of Port Arthur on March 28.

Nora caused floods and landslides as it slammed into Queensland's north tropical cast. It destroyed trees and downed power lines in the remote town of Pormapuraaw, causing power outages to 230 customers. Cars were swept up in floodwaters at a shopping center in Earlville and shoppers waded ankle-deep in water at Rusty's Markets in the CBD.

Its effects are being felt much further than remote areas of Cape York as Nora's heavy rain is causing flooding in some low lying parts of Cairns on Sunday afternoon, Radio Australia reported. This region has recorded about 120 mm (4.7 inches) of rain within a couple of hours.

A severe thunderstorm warning was issued for the Cairns and Port Douglas region by the Bureau of Meteorology on Sunday. The Kuranda Range has been closed in both directions due to a rockslide, while landslips and fallen trees were causing delays on the Captain Cook Highway north of Cairns.

"So it's going to be a day, day-and-a-half, it's just going to be sitting in almost the same spot producing pretty heavy rainfall throughout that area. The total accumulation for the whole event for some places down there may be between 500 to 700 mm (19.7 to 27.5 inches)," he said.

There are no reports of deaths or major injuries at this time.

At 05:04 UTC (16:34 AEST) on March 25, Nora has weakened below tropical cyclone intensity. However, NT/Qld border to Burketown, including Mornington Island and Sweers Island remains in Watch zone.

On the current forecast track, ex-tropical cyclone Nora is expected to move back over southeast Gulf of Carpentaria waters during Monday, March 26 and if this were to occur it is possible that it could reform back into a tropical cyclone by Tuesday, March 27.

However, given the forecast track of Nora is quite close to the coast, the possibility of it moving back over water sooner cannot be ruled out, BOM meteorologists warned. 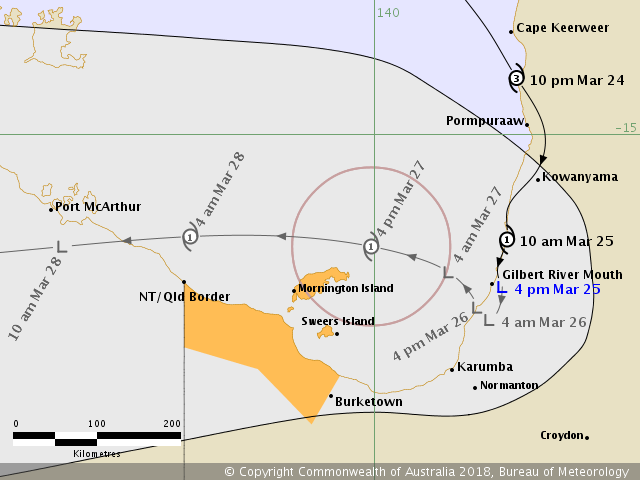 Gales may develop between Burketown and the NT/Qld border, including Mornington Island and Sweers Island, on Tuesday, though this will be highly dependent on ex-tropical cyclone Nora moving back over water and reforming into a tropical cyclone. 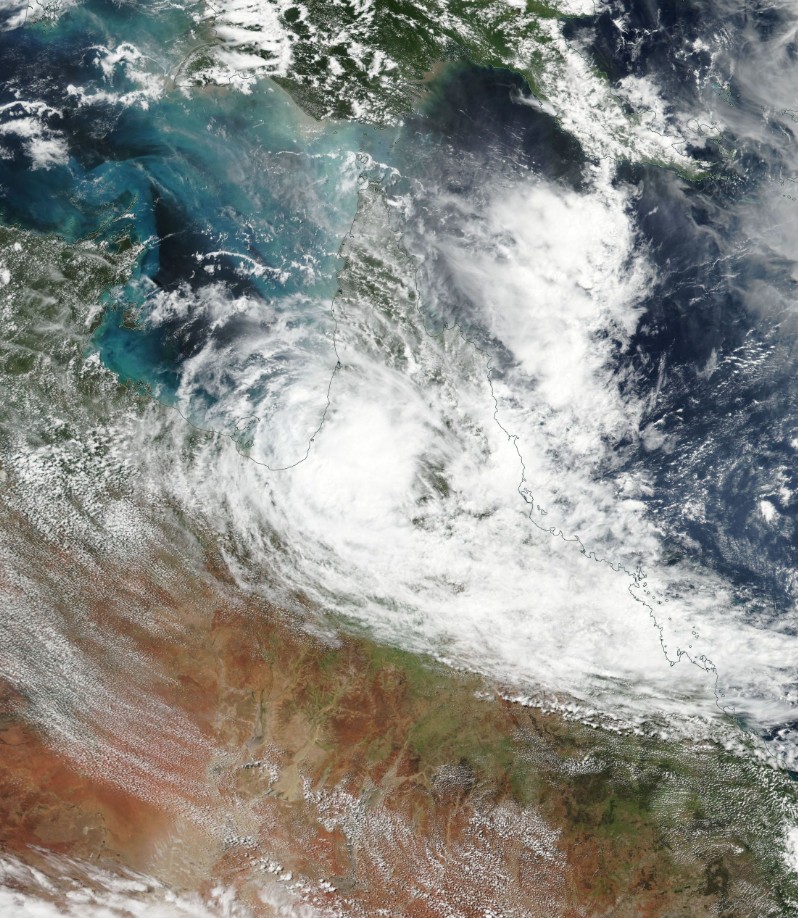