A deep low pressure system started drenching parts of the Australian state of Queensland on February 28, 2018, with up to 358 mm (14 inches) of rain in just 24 hours. This will be a multi-day heavy rainfall event with record, potentially historic, floods possible across Western Queensland in the days ahead. 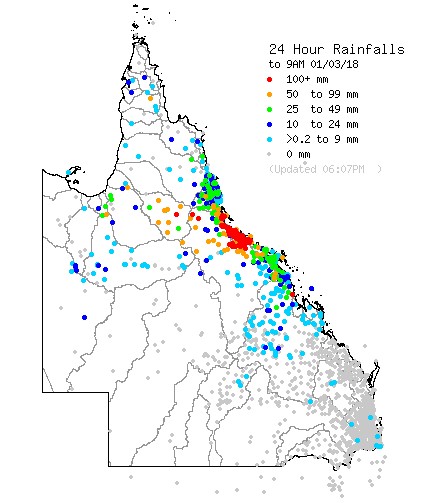 The city of Townsville received its highest rainfall in 3 years, leading to flooded roads and rising rivers, some of which reached major flood levels. As of 20:30 local time, flood warnings are in effect for the rivers Ross, Haughton, Don and Prosperine.

Major flood levels were recorded on the Haughton River at Giru, with levels having reached and exceeded the record flood (3.09 m / 10.13 feet in February 2011) level at Giru during early Thursday evening. The new record flood level for this location is now 3.10 m (10.17 feet).

Local media said parents have been forced to wade through floodwaters to pick up their children from Deeraqun childcare center, one of several closed due to flooding from a two-day deluge.

The Bureau of Meteorology said this complex system is expected to continue bringing rain to Townsville area for at least two more days.

"It’s hammering down there at the moment and we probably have another 12 to 24 hours of this really heavy rain. It will probably start to ease off through the afternoon. Even for the next two, three or even four days there will be big heavy showers and storms around," BOM forecaster Livio Regano said, adding that the system is drifting west and by mid-tomorrow would be impacting the western side of the Northern Goldfields, Gulf Country and Mt Isa.

"All of Western Queensland need to prepare for a potential Major Record Flood which is forecast to impact the area during the next 5 days," Higgins Storm Chasing (HGS) warned a few hours ago. "It could rival anything during the past 44 years (since the 1974 flood), it may also be so significant that nothing has ever been experienced like it in this state. Widespread rainfall totals of 200 to 400 mm (7.9 – 15.8 inches) is likely with up to 550 mm (21.6 inches) possible!"

We are urging people to take action NOW to protect property and livestock against heavy rain and flooding. Locations are likely to be isolated for up to 1 or 2 weeks. Logistics transport, public and tourism travel are also likely to be disrupted for an extended period. Stay safe everyone and stay tuned to the latest forecasts, updates ​and warnings.

The low is then forecast to intensify and turn south over Mt Isa on Saturday, March 3 before stalling over Boulia in Western Queensland on Sunday, March 4.

"The following areas are at risk of record breaking rainfall over between 200 to 400 mm (7.9 – 15.8 inches) with possibly up to 550 mm (21.6 inches) – the North West and Channel Country districts, possibly the Central West district depending on exact movements of the low. These rainfall forecast figures should they eventuate will produce major flooding and potentially historic flooding through Western Queensland. 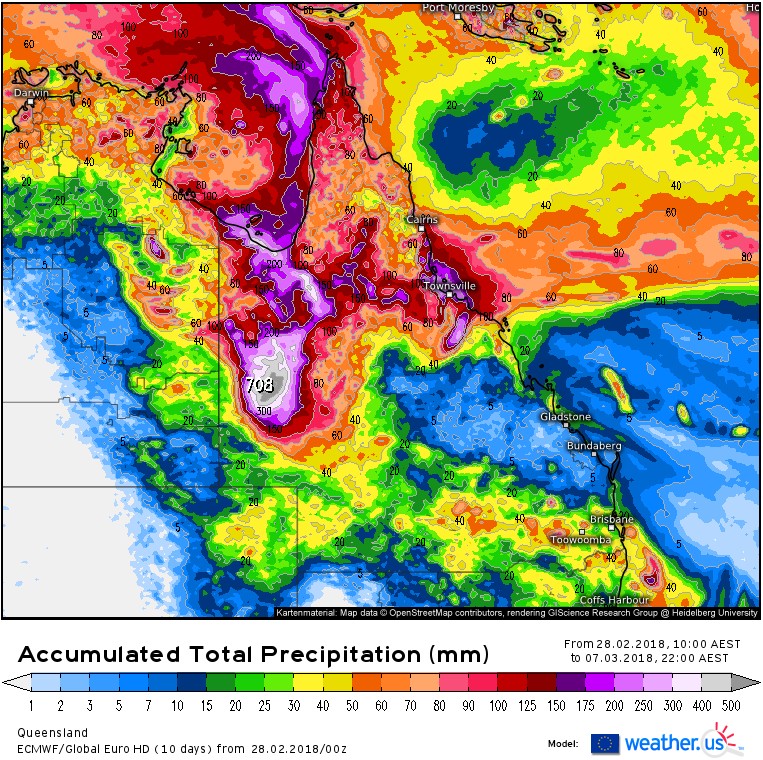 Featured image: Flooding in Townsville on February 28, 2018. Credit: Joanna I