Although magnitude 6 earthquakes occur about every 25 years along the Parkfield Segment of the San Andreas Fault, geophysical data suggest that the seismic slip induced by those magnitude 6 earthquakes alone does not match the long-term slip rates on this part of the San Andreas fault, researchers report November 28 in the Bulletin of the Seismological Society of America (BSSA).

The Parkfield section of the fault could rupture simultaneously with a magnitude 7.7 earthquake on the fault segment immediately to the south. These southern earthquakes – the latest of which was the 1857 Fort Tejon earthquake – appear to occur about every 140 to 300 years. Using these data, Sylvain Michel of the University of Cambridge, UK and colleagues calculate that an earthquake occurring on the Parkfield segment during these simultaneous ruptures could reach the equivalent of a magnitude 6.4 to 7.5 earthquake, and help to close the "slip budget" on the fault. 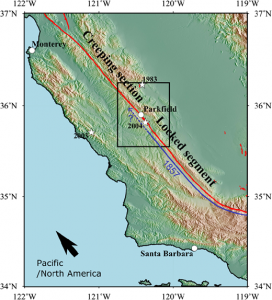 The Parkfield Section of the San Andreas fault. Credit: Seismological Society of America

Michel and colleagues compared the amount of slip in earthquakes on the Parkfield segment of the fault with the between-earthquake accumulation of seismic moment (a measure of earthquake size that is related to the fault area, amount of fault slip, and the material strength). The buildup of this seismic moment between earthquakes is called the "moment deficit," which is available for release during the next earthquake.

The seismic moment released from the six earthquakes of about magnitude 6 that have occurred on the Parkfield fault segment since 1857 would only account for about 12 % of the available moment deficit, Michel said. "This analysis shows that balancing the moment budget on the Parkfield segment of the San Andreas fault probably requires more frequent or larger earthquakes than what the instrumental and historical data suggest," he and his colleagues write in the BSSA paper.

The Parkfield segment has been studied intensely by seismologists, especially as it forms the transition zone between the "creeping" northern half of the fault and its "locked" southern portion. Michel and colleagues took advantage of the wealth of geophysical data that have been collected in this region, using a catalog of earthquakes that have occurred in the area and models of the fault slip rate inferred from surface deformation given by Global Positioning System (GPS) and satellite observations of ground changes. The detailed information allowed the researchers to apply the slip budget concept to assessing the seismic potential of the fault, and thus the frequency of earthquakes.

After concluding that the Parkfield segment must host occasional large earthquakes under the slip budget model, they calculated the likely occurrence of these large earthquakes over 30-year and 200-year periods.

The findings will help seismologists further examine how earthquakes on the Parkfield segment might occur in the future, the researchers said. For instance, their data could be used to explore whether locked patches of the fault separately host magnitude 6 or smaller earthquakes, and if larger, less frequent earthquakes might rupture across patches.

Provided by Seismological Society of America