Volcanic eruptions always seize the attention of climate scientists, because the sulfate aerosols formed in the volcanic plumes may stay months to years in the stratosphere – the second layer of the Earth's atmosphere – resulting in the increase of radiation reflection from the Sun back into space, and therefore cooling the Earth's lower atmosphere or troposphere in a long time period.

It is traditionally believed that because of atmospheric circulation patterns, eruptions in the tropics could have an effect on the climate in both hemispheres while eruptions at mid or high latitudes only have impact over the hemisphere where they erupt.

"Well, it is not always the case", says Dr. Xue Wu, the corresponding author of a recently published study in Atmospheric Chemistry and Physics, "We have found evidences showing that a high-latitude volcano can enhance the aerosol layer in the tropical stratosphere, and also have impact on the climate of both hemispheres."

WU is from the Key Laboratory of Middle Atmosphere and Global Environment Observation (LAGEO), Institute of Atmospheric Physics, Chinese Academy of Sciences. She worked together with Dr. Sabine Griessbach and Dr. Lars Hoffmann from Jülich supercomputing center, Forschungszentrum Jülich, Germay on a high-latitude volcanic eruption case.

They used the Lagrangian particle dispersion model — MPTRAC, together with multi-source satellite observations to study the transport of the volcanic aerosol from the high-latitude volcanic eruption Sarychev (48°N, 153°E). The study revealed that when the Sarychev volcano erupted in June 2009, the Asian summer monsoon (ASM) anticyclonic circulation was developing. The anticyclonic circulation facilitated the meridional transport of aerosols from the extratropical upper troposphere/lower stratosphere to the tropical tropopause region.

Then, the aerosols ascended slowly in the upward branch of the Brewer-Dobson circulation (BDC), the primary circulation in the stratosphere, and dispersed with the poleward branches of the BDC to both hemispheres. So with the help of the ASM anticyclonic circulation, this high-latitude volcanic eruption will not only influence the climate in the northern hemisphere where the Sarychev located, but also have impact on the southern hemisphere, just as a tropical eruption does. 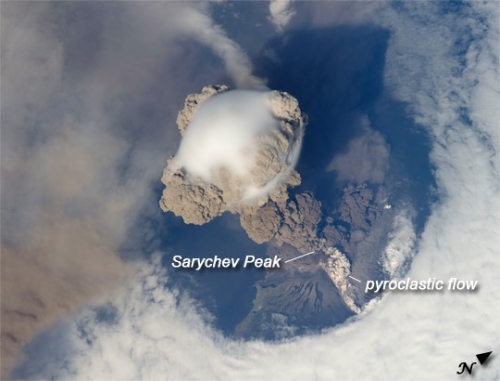 Based on their calculation, although there was only about 4% of the total SO2 from the Sarychev eruption (1.2±0.2×106 tons) transported to the tropical stratosphere, it would result in 6 ±1×104 tons sulfate aerosol, which is several times larger than the 1.5-2×104 tons per year required to explain the increase trend of the tropical stratospheric aerosol. On the contrary, if the Sarychev erupted in winter, the aerosol would be confined to the polar side of the strong subtropical jets, deposited or be washed out from the atmosphere in a relatively short time. 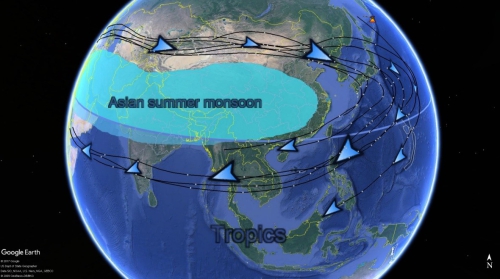 The anticyclonic circulation of the Asian summer monsoon transports aerosols from high latitudes to the tropics. Image Credit: WU XUE

WU emphasizes, "It's all about timing. If a high-latitude volcano erupts when the ambient atmospheric conditions are favorable for transport, it is well worth more attention". In the past decade, the Sarychev eruption in 2009 was not the only case that made advantage of the ASM circulation to transport sulfate aerosol to the tropical stratosphere, and "we may expect more in the future." Says Wu.

Provided by Institute of Atmospheric Physics