ESO’s fleet of telescopes in Chile have detected the first visible counterpart to a gravitational wave source. These historic observations suggest that this unique object is the result of the merger of two neutron stars. The cataclysmic aftermaths of this kind of merger — long-predicted events called kilonovae — disperse heavy elements such as gold and platinum throughout the Universe. This discovery, published in several papers in the journal Nature and elsewhere, also provides the strongest evidence yet that short-duration gamma-ray bursts are caused by mergers of neutron stars, ESO announced October 16, 2017.

For the first time ever, astronomers have observed both gravitational waves and light (electromagnetic radiation) from the same event, thanks to a global collaborative effort and the quick reactions of both ESO’s facilities and others around the world. 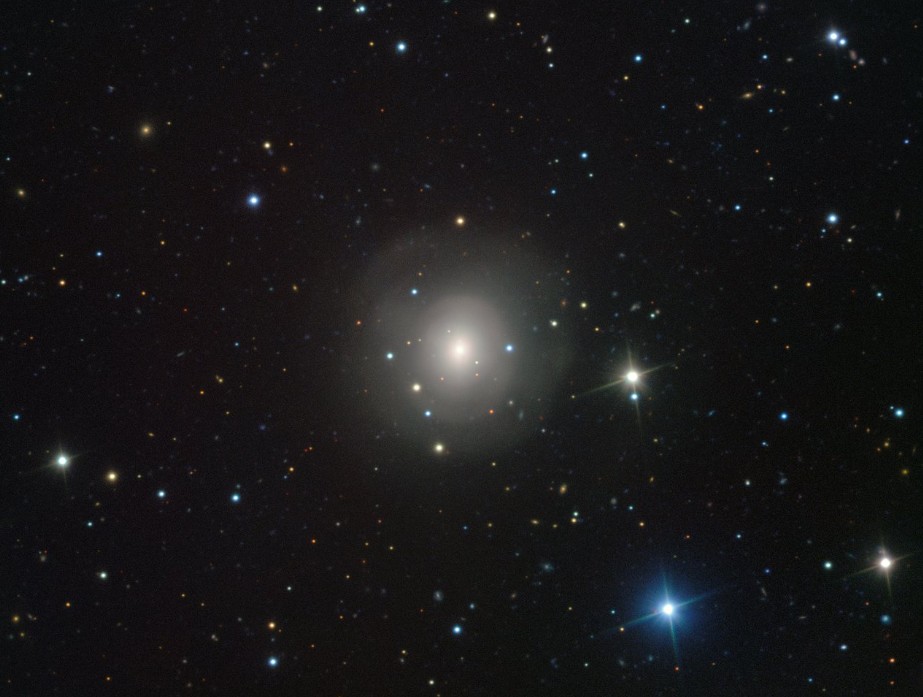 This image from the VIMOS instrument on ESO’s Very Large Telescope at the Paranal Observatory in Chile shows the galaxy NGC 4993, about 130 million light-years from Earth. The galaxy is not itself unusual, but it contains something never before witnessed, the aftermath of the explosion of a pair of merging neutron stars, a rare event called a kilonova (seen just above and slightly to the left of the center of the galaxy). This merger also produced gravitational waves and gamma rays, both of which were detected by LIGO-Virgo and Fermi/INTEGRAL respectively. Credit: ESO/A.J. Levan, N.R. Tanvir 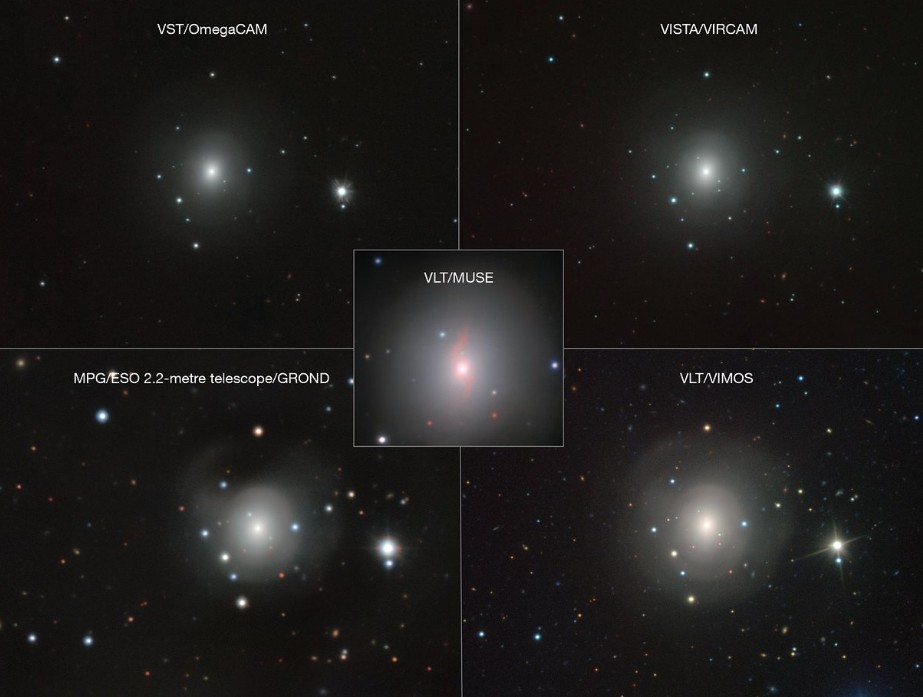 This composite shows images of the galaxy NGC 4993 from several different ESO telescopes and instruments. They all reveal a faint source of light close to the center. This is a kilonova, the explosion resulting from the merger of two neutron stars. This merger produced both gravitational waves, detected by LIGO–Virgo, and gamma rays, detected by Fermi and INTEGRAL in space. Credit: VLT/VIMOS. VLT/MUSE, MPG/ESO 2.2-metre telescope/GROND, VISTA/VIRCAM, VST/OmegaCAM

The LIGO–Virgo observatory network positioned the source within a large region of the southern sky, the size of several hundred full Moons and containing millions of stars. As night fell in Chile many telescopes peered at this patch of sky, searching for new sources. These included ESO’s Visible and Infrared Survey Telescope for Astronomy (VISTA) and VLT Survey Telescope (VST) at the Paranal Observatory, the Italian Rapid Eye Mount (REM) telescope at ESO’s La Silla Observatory, the LCO 0.4-meter telescope at Las Cumbres Observatory, and the American DECam at Cerro Tololo Inter-American Observatory.

The Swope 1-metre telescope was the first to announce a new point of light. It appeared very close to NGC 4993, a lenticular galaxy in the constellation of Hydra, and VISTA observations pinpointed this source at infrared wavelengths almost at the same time. As night marched west across the globe, the Hawaiian island telescopes Pan-STARRS and Subaru also picked it up and watched it evolve rapidly.

"There are rare occasions when a scientist has the chance to witness a new era at its beginning," said Elena Pian, an astronomer with INAF, Italy, and lead author of one of the Nature papers. "This is one such time!"

ESO launched one of the biggest ever “target of opportunity” observing campaigns and many ESO and ESO-partnered telescopes observed the object over the weeks following the detection. ESO’s Very Large Telescope (VLT), New Technology Telescope (NTT), VST, the MPG/ESO 2.2-metre telescope, and the Atacama Large Millimeter/submillimeter Array (ALMA) all observed the event and its after-effects over a wide range of wavelengths. About 70 observatories around the world also observed the event, including the NASA/ESA Hubble Space Telescope.

The ripples in spacetime known as gravitational waves are created by moving masses, but only the most intense, created by rapid changes in the speed of very massive objects, can currently be detected. One such event is the merging of neutron stars, the extremely dense, collapsed cores of high-mass stars left behind after supernovae. These mergers have so far been the leading hypothesis to explain short gamma-ray bursts. An explosive event 1000 times brighter than a typical nova — known as a kilonova — is expected to follow this type of event.

The almost simultaneous detections of both gravitational waves and gamma rays from GW170817 raised hopes that this object was indeed a long-sought kilonova and observations with ESO facilities have revealed properties remarkably close to theoretical predictions. Kilonovae were suggested more than 30 years ago but this marks the first confirmed observation.

Following the merger of the two neutron stars, a burst of rapidly expanding radioactive heavy chemical elements left the kilonova, moving as fast as one-fifth of the speed of light. The colour of the kilonova shifted from very blue to very red over the next few days, a faster change than that seen in any other observed stellar explosion.

"When the spectrum appeared on our screens I realized that this was the most unusual transient event I’d ever seen," remarked Stephen Smartt, who led observations with ESO’s NTT as part of the extended Public ESO Spectroscopic Survey of Transient Objects (ePESSTO) observing programme. "I had never seen anything like it. Our data, along with data from other groups, proved to everyone that this was not a supernova or a foreground variable star, but was something quite remarkable."

Spectra from ePESSTO and the VLT’s X-shooter instrument suggest the presence of caesium and tellurium ejected from the merging neutron stars. These and other heavy elements, produced during the neutron star merger, would be blown into space by the subsequent kilonova. These observations pin down the formation of elements heavier than iron through nuclear reactions within high-density stellar objects, known as r-process nucleosynthesis, something which was only theorized before.

"The data we have so far are an amazingly close match to theory. It is a triumph for the theorists, a confirmation that the LIGO–VIRGO events are absolutely real, and an achievement for ESO to have gathered such an astonishing data set on the kilonova," adds Stefano Covino, lead author of one of the Nature Astronomy papers.

“ESO’s great strength is that it has a wide range of telescopes and instruments to tackle big and complex astronomical projects, and at short notice. We have entered a new era of multi-messenger astronomy!” concludes Andrew Levan, lead author of one of the papers.

Featured image: This image from the VIMOS instrument on ESO’s Very Large Telescope at the Paranal Observatory in Chile shows the galaxy NGC 4993, about 130 million light-years from Earth. The galaxy is not itself unusual, but it contains something never before witnessed, the aftermath of the explosion of a pair of merging neutron stars, a rare event called a kilonova (seen just above and slightly to the left of the centre of the galaxy). This merger also produced gravitational waves and gamma rays, both of which were detected by LIGO-Virgo and Fermi/INTEGRAL respectively. Credit: ESO/A.J. Levan, N.R. Tanvir