At least two people were injured and dozens of homes damaged as severe storms accompanied by tornadoes and large hail swept through the US states of Iowa, Missouri, Minnesota, and Wisconsin on Wednesday afternoon, June 28, 2017. NWS Storm Prediction Center received reports of 27 tornadoes, most of them in Iowa.

Iowa took the brunt of the Wednesday's storm. In the eastern part of the state, a tornado touched down around the city of Prairieburg, causing significant damage.

According to the Linn County Sheriff's Office, several trees and power lines were downed and at least two homes and numerous vehicles damaged as a result of the tornado. "The Prairieburg area saw the worst of the damage from the storm. A resident at 5073 Wagner Rd had to be transported to the hospital from injuries she sustained when the roof of her garage collapsed on her. She was transported by ambulance for non-life threatening injuries. Nagel Grain just south of Prairieburg was severely damaged along with semis and other vehicles flipped over. The roof of 306 E Main St was also ripped off the residence, but there was no one home at the time."

Parts of the town of about 200 people were still without power Wednesday evening, the Sheriff's office said.

In an update released 07:50 CDT, June 29, Linn County Sheriff's Office advised news crews or any volnunteers helping cleanup in Prairieburg today must enter the town from the north. All other access to town is restricted at this time.

This is the tornado that hit my hometown of Prairieburg, Iowa tonight. Thanks to @zglas10 for the picture. More: https://t.co/geUrVnsQTt pic.twitter.com/G9pHCN900g

In the Des Moines area, a severe thunderstorm marched into the metro during the evening rush hour, dumping rain and hail, The Des Moines Register reports. Particularly in Clive, West Des Moines, Waukee and Van Meter, residents reported seeing golf ball-sized hail and larger. Fremont County Emergency Management Director Mike Crecelius said that a tornado hit a rural area east of Sidney in the afternoon. There were no injuries were reported, and damages are likely limited to crops in the area.

There were several confirmed reports of an extremely large and dangerous tornado touching down in eastern Iowa, according to the National Weather Service in Quad Cities. These reports were made near Hopkinton around 19:00 and Cascade around 19:25 CDT, according to the weather service.

At least one tornado touched down in Pierce County, western Wisconsin, injuring one person. The tornado reportedly touched down around 16:00 CDT near Ellsworth and moved east toward the Spring Valley around 16:30. Several houses suffered significant damage southwest of Spring Valley.

Iowa County Emergency Management officials said they have received reports of power poles and trees down along Highway 80 by Livingston. Houses in the area were also damaged by falling trees, and several farm buildings were damaged.

Highway 69 was closed in both directions near Monroe in Green County due to multiple power poles down, according to a release from the Department of Transportation.

Grant County Emergency Management officials said wind gusts were measured between 129 and 145 km/h (80 and 90 mph) in the Livingston, Montfort and Stitzer areas.

Officials said three mobile homes were damaged in the Livingston area, and there was a large natural gas leak at the Biddick Inc. facility that was controlled by plant maintenance personnel.

In total, at least 27 tornadoes were reported on Wednesday across Iowa, Wisconsin, Missouri, and Minnesota. 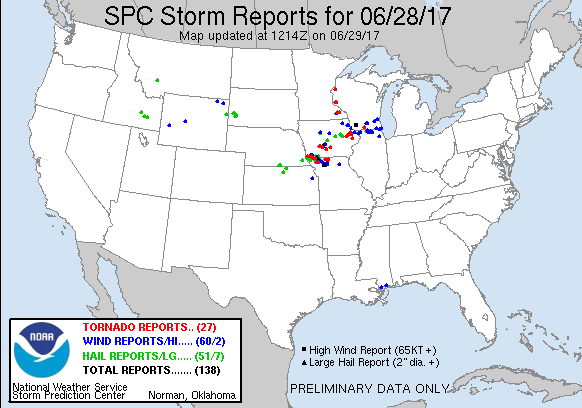 Featured image: A tornado near Central City before in tracked through Prairieburg, Iowa on Wednesday, June 28, 2017. Credit: Twitter.com/zglas10