A trough across the central Caribbean is dumping extremely heavy rain on parts of Jamaica since Saturday evening, May 13, 2017, causing major flooding and landslides. Flooding affected 10 of country's 14 parishes, with Clarendon the worst hit. The Health Ministry has issued gastroenteritis and leptospirosis alert. Met Service said the island experienced an unprecedented level of rainfall. Some parishes saw more rain over the four days than the usual average for the entire month of May.

Loss of bridges, multiple damaged roads and marooned communities have made Clarendon the parish worst affected by more than 72 hours of heavy rainfall, The Jamaica Gleaner reports.

Office of Disaster Preparedness reported Aenon Town in Clarendon North Western inundated with up to 5.2 m (17 feet) of flood waters.

Scores of motorists and pedestrians were also left stranded in Pennants Square as the Rio Minho, which was in spate and overflowed on to the roadway, deposited truckloads of silt.

Several areas are also without water as a result of high turbidity levels, blocked intakes and access, dislocated pipelines and power supply problems that have forced the shutdown of water supply facilities. Some 12 000 people were reportedly without power Tuesday, May 16.

"The peak of the intense weather system affecting the island for the last four days has now passed," the director of the Meteorological Service Division, Evan Thompson, said yesterday. The weather should return to normal by Friday, he said. 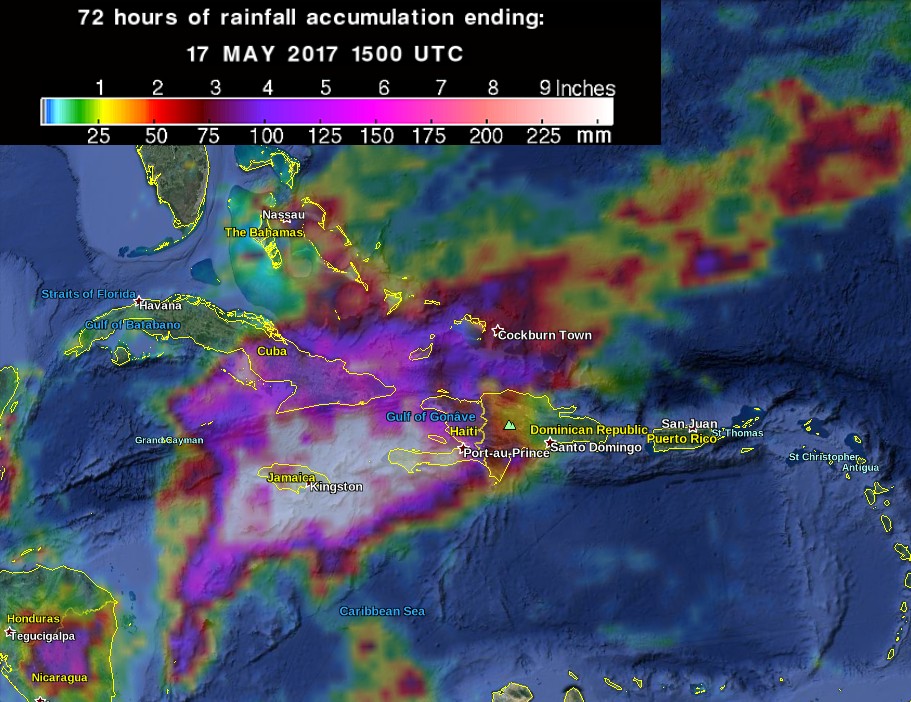 Thompson said that the island has experienced an unprecedented level of rainfall over the last four days and that some parishes such as Clarendon, St Mary and St Catherine saw more rain over the four days than the usual average for the entire month of May.