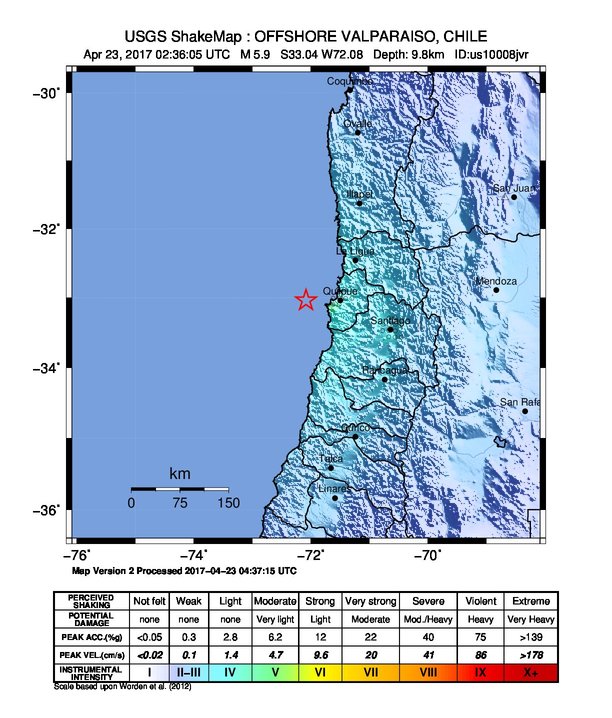 ONEMI director, Ricardo Toro, said seven earthquakes were felt by population between the regions of Coquimbo and O'Higgins. The maximum perceived intensity was VI on Mercalli scale in the communes of Valparaíso, Puchuncaví, Casablanca, San Antonio and Villa Alemana, in the Valparaíso Region and in the commune of Tiltil, in the Metropolitan Region.

"According to information provided by the National Seismological Center, the strongest earthquake was 6.0 on the Richter scale, whose epicenter was 48 km (30 miles) west of Valparaiso," Toro said and added that tsunami from this one was not expected. "There were no reports of injuries or damage."

"We call on the population to remain calm, inform themselves through official channels and prioritize text messages or social networks to communicate, in addition to having their emergency kit ready in case of a major emergency," he said.

Ross Stein and Volkan Sevilgen of Temblor said the quakes are occurring on or near the megathrust surface 30 km (18 miles) offshore the major port city of Valparaiso.

"Sustained sequences of moderate shocks are rare; most instead begin with the largest shock, termed the ‘mainshock,’ followed by ‘aftershocks’ that become less frequent with time, and are only rarely larger than the mainshock. So, in both respects – magnitude and frequency – this sequence looks different. Staccato seismic swarms like this one probably accompany slow slip on either the megathrust, or a thrust fault that splays off the megathrust. The depth and location of the sequence, as well as the ‘focal mechanism’ of the largest shock, suggest that the sequence is occurring on, or more likely above, the megathrust surface, where the Nazca Plate is descending beneath the South American Plate," they explained. 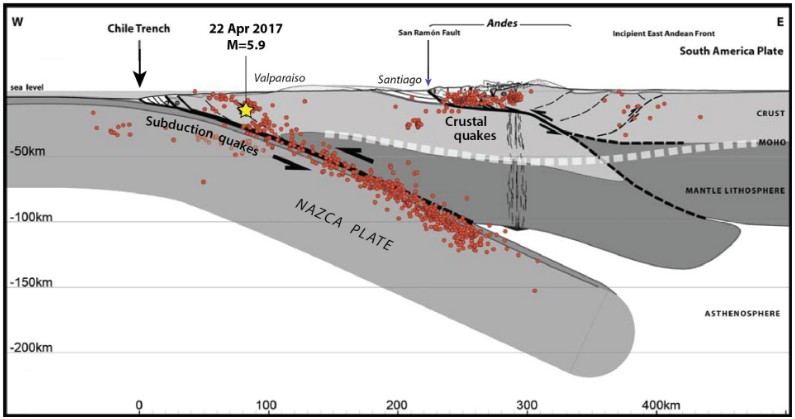 Subduction of the Nazca plate beneath the deformed and faulted South American plate, from Armijo et al. (2010). Santiago lies at the foot of the Andes. The red dots show the best-located M≥4.0 earthquakes during the period, 2000–2005, by Servicio Sismológico Nacional of Universidad de Chile. Credit: Temblor

"The world’s great quakes have all struck on megathrusts, and the largest quake ever recorded – a M9.5 event in 1960 – struck along the Chile Trench in 1960 about 800 km (500 miles) to the south of today’s events. Closer to home was the 2010 M8.8 Maule, Chile, earthquake, which we calculate brought the Valparaiso portion of the megathrust closer to failure. That earthquakes should occur in this location is consistent with the Coulomb stress transfer from the 2010 M8.8 Maule shock. One can see on the image below that the megathrust surface offshore Valparaiso was brought closer to failure (turns orange), whereas the stress dropped on the part of the megathrust that slipped in the 2010 shock (turns blue)." 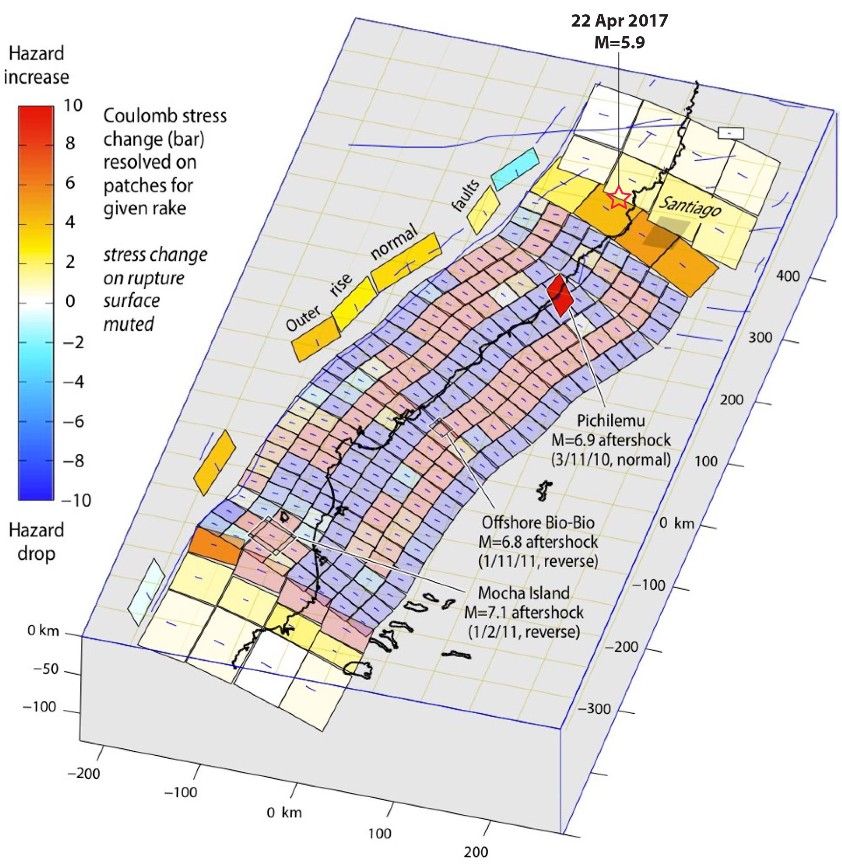 Coulomb stress imparted by the 2010 M=8.8 Maule, Chile, earthquake to the surrounding faults. We calculate the stress was increased at the site of today’s swarm. Credit: Temblor