Kīlauea Volcano's episode 61g lava flow is still active and entering the ocean at Kamokuna on the volcano's south coast. Recent observations of the ocean entry indicate growing instability of the adjacent sea cliff. A potential collapse of the cliff poses an extreme danger to anyone in the closed area on land, as well as to boats near the ocean entry, Hawaiian Volcano Observatory warns.

On January 25, 2017, HVO geologists noted an extensive crack running parallel to the sea cliff about 5 – 10 m (16 – 33 feet) behind the stream of lava at the Kamokuna ocean entry

Ground inspection of this crack by HVO geologists on January 28 showed 30 cm (about 1 foot) of separation across the crack. Four days later, on February 1, this crack had widened to about 70 cm (2.5 feet). The seaward block bounded by this crack was visibly moving up to 1 cm (about 1/2 inch), possibly in response to explosions below the ocean entry as hot lava mixed with cool ocean water. In addition, ground shaking could be felt up to several hundred meters (yards) away. 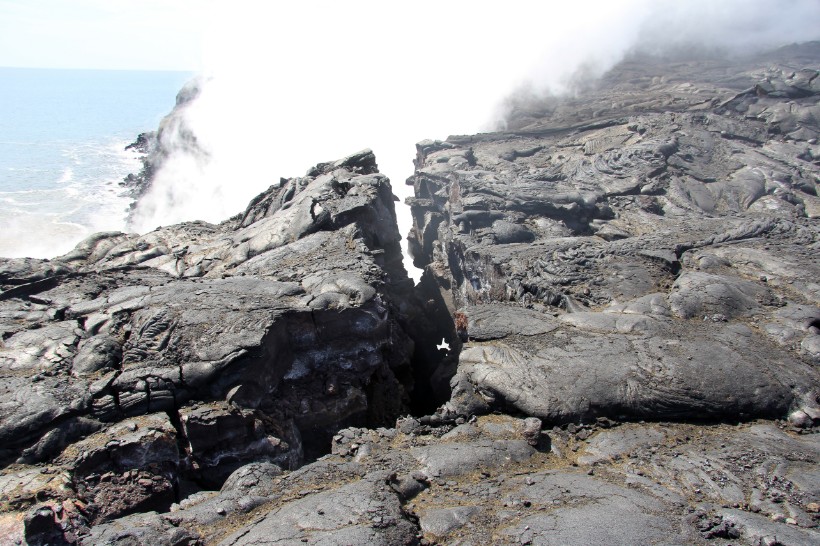 The entire section of the sea cliff that was seaward of the hot crack collapsed, except for a small block of rock (left) at the eastern end of the crack; this piece of the sea cliff, estimated to be 30 m long and 5 m wide (98 x 16 ft), remains highly unstable and could collapse with no warning. During the collapse, rocks hitting the ocean generated a wave that propagated outward from the coast. After the collapse, no lava was visible, but is apparently still flowing into the sea based on the continuing steam plume and explosions of spatter.

These observations show that this portion of the sea cliff is highly unstable and could collapse into the ocean with no warning.

Sudden collapse into the ocean of a slab of sea cliff about 28 m (90 ft) high and about 150 m (490 ft) or more in length would create a significant wave that would travel rapidly out to sea. It could also shower the immediate area with blocks of hot rock and fragments of molten lava and prompt more powerful explosions as the 61g lava tube is further exposed.

The 3 x 5 km (1.9 x 3.1 miles) caldera was formed in several stages about 1500 years ago and during the 18th century; eruptions have also originated from the lengthy East and SW rift zones, which extend to the sea on both sides of the volcano. About 90% of the surface of the basaltic shield volcano is formed of lava flows less than about 1 100 years old; 70% of the volcano's surface is younger than 600 years. A long-term eruption from the East rift zone that began in 1983 has produced lava flows covering more than 100 sq km (37 sq miles), destroying nearly 200 houses and adding new coastline to the island. (GVP)