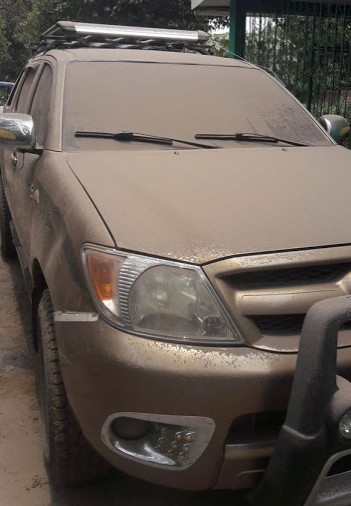 Similar eruptions of San Cristobal were observed in June 2015:

According to INETER, about 41 gas explosions occurred at San Cristóbal between 13:54 and 16:25 local time on June 6, 2015. The strongest one occurred at 13:55, and generated an ash plume that rose 200 m (656 feet) above the crater rim and drifted SE. After the short period of increased activity, San Cristóbal returned to a calm state.

INETER reported that at 09:07 local time on June 23, 2015, an explosion at San Cristóbal generated a gas-and-ash plume that rose 2 km (6 561 feet) and drifted SE. An explosion at 18:35 produced a gas plume with low ash content; the height of the plume was unable to be determined due to inclement weather. INETER noted that seismicity remained at background levels. Seismic signals detected a lahar between 18:50 and 19:29; an observer reported that the small lahar descended the W and SW flanks.

El Chonco, with several flank lava domes, is located 4 km W of San Cristóbal; it and the eroded Moyotepe volcano, 4 km NE of San Cristóbal, are of Pleistocene age. Volcán Casita, containing an elongated summit crater, lies immediately east of San Cristóbal and was the site of a catastrophic landslide and lahar in 1998. The Plio-Pleistocene La Pelona caldera is located at the eastern end of the complex. Historical eruptions from San Cristóbal, consisting of small-to-moderate explosive activity, have been reported since the 16th century. Some other 16th-century eruptions attributed to Casita volcano are uncertain and may pertain to other Marrabios Range volcanoes. (GVP)