According to the CATDAT database, over 8 million deaths have been caused by natural disasters such as earthquakes, floods, storms, bush-fires and volcanoes since the beginning of the 20th century. The highest amount of damage has been caused by floods while the number of deadly earthquakes and storms exhibits a recently growing trend. The total economic damage in that period has been estimated at $7 trillion USD.

The CATDAT database shows the socioeconomic loss and metric resulting from the natural disasters around the globe. It has been composed by the risk engineer Dr. James Daniell from the Karlsruhe Institute of Technology (KIT).

The model is designed to help governments and aid organizations with catastrophe management and rapid assessment of the disaster scale. The work was presented at the 2016 European Geosciences Union General Assembly in Vienna.

The study has utilized data from more than 35 000 natural disasters that occurred since 1900.

According to research results, about one-third of economic losses between 1900 and 2015 have been brought on by flood events, while at the same time, earthquakes have caused 26% of losses, storms 19%. Volcanic eruptions are responsible for about 1% of losses.

While the floods are accountable for the majority of the economic losses until 1960, in the subsequent period, storms and storm surges are responsible for 30% of the losses. 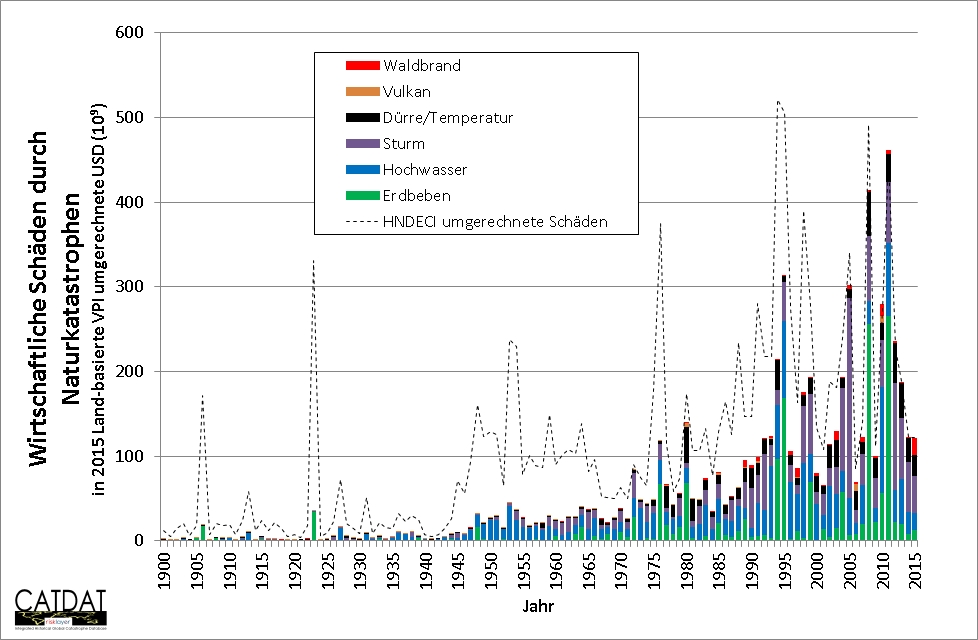 "Over the last 100+ years the economic losses via natural disasters, in absolute terms, have increased,“ said Dr. Daniell, who conducts research at KIT. “Less developed nations are often more vulnerable towards catastrophes – that means relative to population and capital – more deaths and higher economic losses are expected post-event."

This is mostly due to the building quality where building regulations and disaster codes are not adequately implemented. Also, the areas where people work, such as the coast of Bangladesh are highly populated, and the financial gains usually outweigh the potential disaster risks.

To investigate how the vulnerability changes over time, Dr. Daniell normalized the losses to the year 2015 by examining the effect of historic events on today's conditions.

"There is a clear trend, that many (but not all) countries are protecting themselves against disasters by building better, and are therefore reducing their risk of high losses.”

Most evident are the improvements in flood protection. For example, from 1960 onwards, the normalized losses have steadily reduced, and the reduction is most visible in China and Japan.

The total natural disaster economic loss is in generally estimated to range between 6.5 and $14 trillion USD, depending on the index used for converting event-year dollar to current 2015 dollars (i.e., consumer price index or building cost index).

Dr. Daniell has used a country-by-country GDP-deflator based price index, which gives the total amount of $7 trillion USD:

“It is often impossible to get one exact value for a disaster event, as economic losses are often difficult to quantify, and death tolls are often overestimated (for example, the Haiti earthquake in 2010), or underestimated (like Uzbekistan in 1966)." 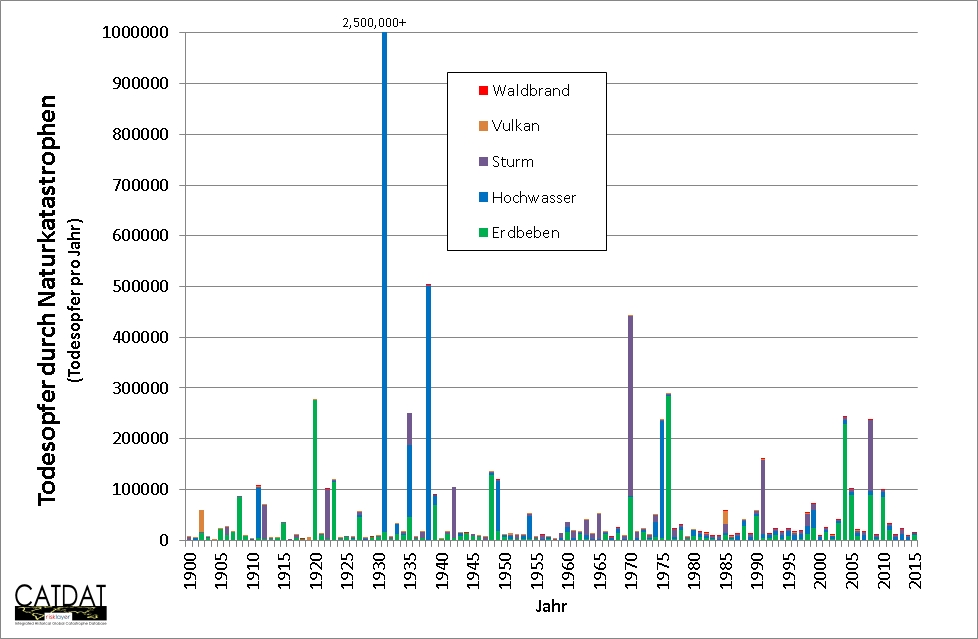 So far, the year 2011 suffered the largest economic loss, as major earthquakes hit Japan and New Zealand: “with around 335 billion USD direct damage, the Tohoku earthquake-tsunami-nuclear sequence on March 11, 2011, is the highest single-event natural catastrophe loss." About 18 500 people died, and 450 000 were left homeless in the disaster followed by a tsunami.

Since 2000, the largest disaster in terms of death tolls are the 2004 Indian Ocean Tsunami where about 230 000 people died, and the 2008 Cyclone "Nargis" in Myanmar with 140 000 fatalities. The highest death toll in a natural disaster event of 2.5 million was recorded for the 1931 Great Floods event in China.

Between 1900 and 2015, about $2.32 million people died in earthquakes. 59% of them died when masonry buildings collapsed while 28% of them lost their lives to secondary effects such as tsunamis or landslides. 98 000 people died in volcanic eruptions.

"The absolute total of deaths through natural catastrophes has remained reasonably constant with a slight decrease. Around 50 000 people on average die each year. However, relative to population, death tolls have decreased significantly from 1900 – 2015."

During the same period, about half of people died due to flood. However, the flood death rate has been significantly decreasing since 1960 due to better planning, warnings and preventive measures, while earthquakes have caused the highest, 40% of disaster deaths.

When compared to the global death rate due to all causes, the rates of deaths linked to natural disasters has remained more or less constant.