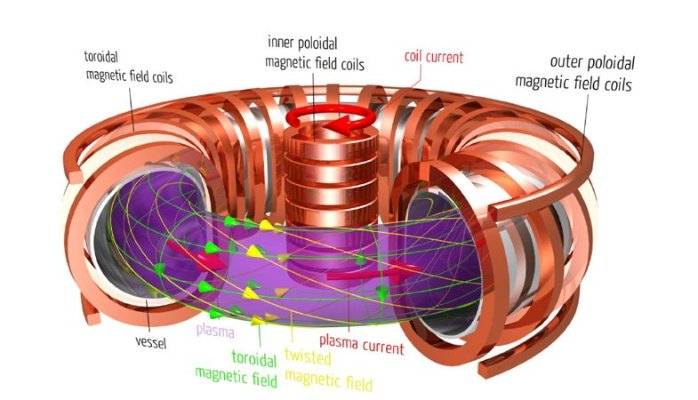 After so many technical difficulties that took almost two decades and 1.1 million construction hours to overcome, Germany’s new Wendelstein 7-X (W7-X) was officially completed on December 10, 2015.

The of W7-X, housed at the Greifswald branch of the Max Planck Institute for Plasma Physics (IPP), cost slightly more than one billion €. Designing W7-X was a very hard task that required supercomputer calculations. It is the first large-scale supercomputer-designed of its kind.

Thomas Klinger, the leader of the project, said, "no one imagined what it means to build one. The machine has 425 tonnes of superconducting magnets and support structure that must be chilled close to absolute zero."

Cooling the magnets with liquid helium is hell on Earth because all cold components must work, leaks are not possible, and access is poor. Engineers had to squeeze more than 250 ports to supply and remove fuel, heat the plasma, and give access for diagnostic instruments.

Due to these technical issues and because of the twisted magnets everything required extremely complex 3D modeling. "It can only be done on the computer. You cannot adapt anything on the site," Klinger said.

However, this type of reactor is known in the plasma physics community as the stellarator. Some fusion researchers believe stellarators are superior to tokamaks and could be a game changer. Tokamaks can control the plasma only in short bursts that last for around seven minutes. And the energy necessary to generate that plasma is more than the energy engineers get from these periodic bursts. In other words, tokamaks consume more energy than they produce.

On the other hand, the designers of W7-X think it could sustain a plasma for at least 30 minutes at a time, which is significantly longer than any tokamak. It is important to note that the tokamak is in wider use. Over three dozen tokamaks are operational around the world, and more than 200 have been built throughout history. The currently under construction ITER is also a tokamak version.

David Gates, head of stellarator physics at the Princeton Plasma Physics Laboratory, said: "The world is waiting to see if we get the confinement time and then hold it for a long pulse."

I assure you right now that you will not. In fact, the results from W7-X will be much worse than those from tokamaks because stellarator will produce less energy than it uses, although it runs four times as long as the tokamaks.

When W7-X is finally filled with plasma and the measure of the energy confinement time is tested, the harsh physical reality will hit those self-confident thermonuclear fusion advocates with brute force. They will be knocked out and remain unconscious for some time, but they will stand up and start the blah-blah-blah once again. Give us more money and we will make ITER project success and also design the prototype power plant (DEMO).

I have no doubt whatsoever – as the next few weeks will show – that Wendelstein 7-X stellarator will be the second biggest fusion project that failed to meet the most basic requirement. The first one was the National Ignition Facility (NIF) that took 17 years and more than $5 billion to build.

The third one will be ITER, whenever it is completed. Please read: Urgent Open Letter to ITER Director General, Bernard Bigot

I believe Arthur Stanley Eddington is the one to blame for all mess in solar physics and astrophysics in general. Eddington was a great advocate and creator of pseudo physics theories.