Heavy rainfalls have triggered torrential flooding across parts of southern, eastern and central China as of November 13, 2015. A huge landslide in eastern China killed 25 people and left 21 missing while, in total, over 200 000 people have been affected by extreme conditions, as of November 16.

Severe weather conditions have been affecting parts of China since November 11, when heavy downpours started battering the region. The worst flooding since 1961 has been reported in Hunan, central China, as Yangtze river water levels rose above the alert levels at several places. 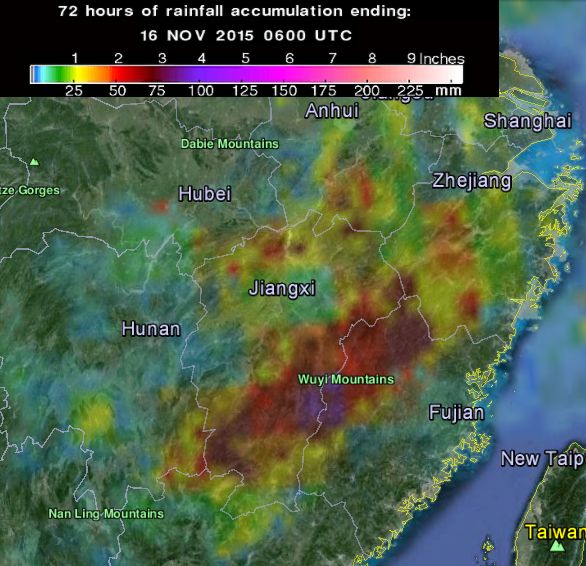 More than 8 000 people have been forced to leave their homes and 87 000 have been affected, as of November 14, Xinhua news agency reported. Major flooding caused traffic disruptions and power loss across the area.

China landslide deaths rise to 25: The death toll from a landslide triggered by flooding in China has r… https://t.co/1wxCbIMohU #World

Severe flooding, caused by torrential downpours have induced a massive landslide in Lidong, Zhejiang Province in eastern China, burying about 30 homes and killing at least 25 people so far. Rescue workers have been employed across the affected areas, pulling people out of the ruins. 12 people still remain missing and more than 300 residents have been evacuated, according to China Central Television (CCTV).

In southern China, water level about 3 m (9.8 feet) above the alert levels have been registered on November 13. Heavy rainstorms and floods caused severe damage to the crop land across the affected areas.

According to some media reports 137 000 people were affected by flood conditions in Guangxi, while economic losses were estimated to 53.91 million yuan.

Heavy rainfall is expected to continue over the next couple of days.