Winter season is clearly well on its way in northern Europe and Turkey, according to prevailing synoptic conditions. A spell of severe weather has been forecast across parts of UK, western Ireland, Faroe & Shetland islands, southwest Norway, northern Netherlands and western Denmark, Germany in the period between November 13 and 15, 2015.

Meteo Europe warned about a possible strong convective development in the synoptical situation over large portions of northern Europe on November 13. A formation of squall line has been regarded as highly possible over Netherlands and parts of North sea and a tornado event in Denmark.

A low pressure system currently centered above southwest Russia is expected to move toward northern Turkey and the Black Sea. 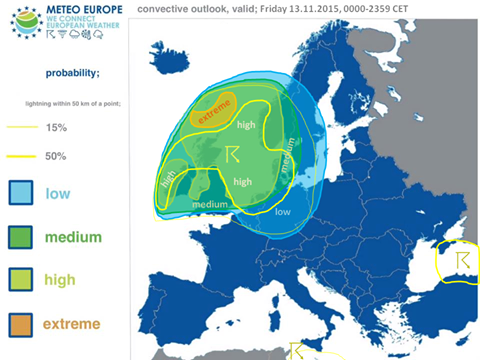 An orange alert has been issued for northwestern Germany, as of November 13. A storm surge of 2.2 m (7.2 feet) is possible near Friedrichsgabekoog in Schleswig-Holstein state over the early morning (local time) on November 14. Strong wind gusts of between 88 and 120 km/h (54.7 – 74.6 mph)  are expected along the coast of the North Seain the afternoon (local time) of November 14.

Storm "Abigail" has already battered northwestern Scotland with strong winds and heavy rainfall. Wind gusts of 87 km/h (54 mph) have been reported on South Uist island of Outer Hebrides on the afternoon (local time) of November 12. Precipitation amounts of more than 32 mm/h (1.2 inches/h) were measured across northern England and portions of Scotland in the morning of November 13.​

Met Office has issued amber alert for heavy rainfall across parts of northern England, Northern Ireland and northern Wales for the weekend of November 14 and 15, as the remnants of ex-hurricane Kate approach UK.

The system has now completed its transition into Atlantic depression and is carrying abundant amount of tropical moisture. Between 50 and 80 mm (1.5 – 3.1 inches) of precipitation, locally rising up to 150 and 225 mm (5.9 – 8.8 inches) is expected to fall across parts of north Wales and northwest England.

The Environment Agency is worried that heavy rains could trigger flooding across the affected areas. Natural Resources Wales (NRW) have informed the public they will be putting flood risk management procedures in place if required and issue Flood Alerts and Warnings accordingly.

Residents of the above mentioned areas are encouraged to be prepared and follow further development.