A team from MIT, the University of California at Los Angeles, the University of Sheffield, and elsewhere has detected a remarkably orderly pattern amid the "equatorial noise."  The discovery may help scientists to more accurately model the space environment and help safeguard scientific, meteorological, Earth-observing, and communications satellites.

Back in 1966, a NASA satellite known as OGO-3 discovered 'noisy' plasma waves at an altitude of around 18 000 km (11 184 miles) above the Earth. The waves occurred very close to the equatorial plane of the planet's magnetic field – the geomagnetic equator. The waves were then known as "equatorial waves."

To identify the origins of the Earth’s “equatorial noise,” the satellites conducted a special campaign to study the structure of plasma waves in the inner magnetosphere. To detect the striped structure, the researchers used observations from the European Space Agency’s Cluster spacecraft — four identical satellites launched in 2000 to study the Earth’s magnetosphere, which is dominated by the Earth’s magnetic field. The Cluster team directed the satellites to orbit very close to the Earth’s geomagnetic equator to measure the properties of waves in the region.

On July 6, 2013,, in a region of space about 19 300 km (12 000 miles) from Earth’s surface, two spacecraft separated by 60 km (37.3 miles), identified a region where the tangle of plasma waves gives way to a very regular structure. The scientists observed a stack of 13 equally spaced, zebra-like stripes as they tried to detect the invisible structure using a spectogram. 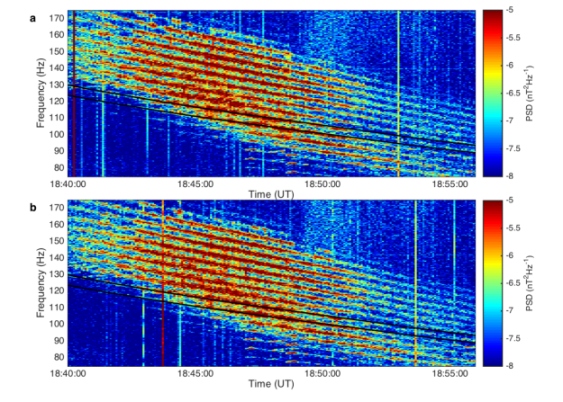 Each stripe, or plasma wave, appeared to be a multiple, or harmonic, of a proton gyrofrequency — the frequency at which protons gyrate around the Earth’s magnetic field line. The scientists also discovered that the very orderly waves likely originated from the gyrating protons, increasing with each stripe from the 17th to the 31st harmonic.

According to Yuri Shprits, a visiting associate professor in MIT’s Department of Earth, Atmospheric and Planetary Sciences, the striped structure could indicate a region in space in which new and different interactions may take place. He thinks that as the structure is pretty close to Earth, it is more important to people. Plasma waves are short lived. They tend to move from one region to another in the space and therefore, everything one can see is noisy. However, the structure we are speaking of, as Shprits says, is highly persistent, highly coherent in the space and remarkably organized.

Observing the harmonic pattern, scientists wanted to be sure if the protons formed the plasma waves. With this intent, the researchers looked in depth at the proton distribution in the region. The satellites also measured the distribution of protons in the region, as well as their velocities.

Focusing on the velocities of protons, the researchers observed a ring-like distribution. The researchers then used computer codes to calculate the rate at which plasma waves were likely to grow, and the frequencies they would adopt, if they originated from such a proton ring distribution. As it turns out, the frequencies exactly matched the harmonic pattern observed by the satellites.

“We showed definitively that these waves are produced by these ion distributions,” Shprits says. “We’re resolving this almost half-century-old problem of the origin of this equatorial noise, definitively showing that it’s not noise, but actually very structured, periodic emissions produced by proton ring distributions.”

Shprits says the discovery may help scientists to more accurately model the space environment. Accurate predictions and specifications of the radiation environment can help safeguard scientific, meteorological, Earth-observing, and communications satellites. Shprits says this research may also help identify new ways to remediate radiation in space. Similar processes may also occur in laboratory plasmas, as well as outer planetary magnetospheres close to the sun, and beyond the heliosphere.

Shprits and his colleagues, including Benjamin Weiss, a professor of planetary sciences at MIT, have published their results on July 14, 2015 in the journal Nature Communications.