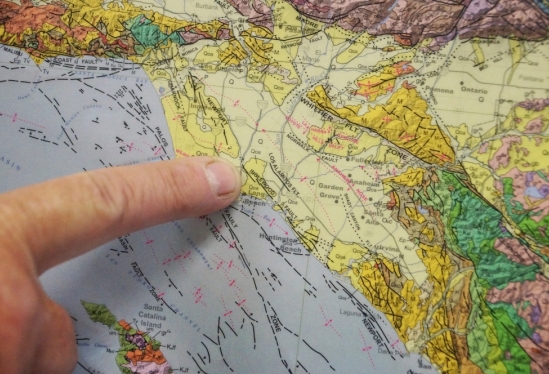 Professor Jim Boles of the University of California, Santa Barbara's Department of Earth Science, and his team, have found proof of helium leakage from the Earth's mantle along the Newport-Inglewood Fault Zone in the Los Angeles Basin. Discovery indicates the current fault zone is much deeper than previously thought, and that it used to be a subduction zone, where the North American plate collided with the Pacific plate, about 30 million years ago.

The research team analyzed 24 samples of casing gas from oil wells in the LA's Westside to Newport Beach in Orange County range, and discovered that over one third of the investigated sites, including some of the deepest ones, show evidence of high levels of helium-3.

Helium-3 is a primordial element. It's only terrestrial presence is in the Earth's mantle, which is the reason why it's leakage suggest the observed fault is far deeper than scientist previously believed. “The results are unexpected for the area, because the LA Basin is different from where most mantle helium anomalies occur,” said Boles. “The Newport-Inglewood fault appears to sit on a 30-million-year-old subduction zone, so it is surprising that it maintains a significant pathway through the crust.”

The analysis of gas samples showed that high levels of helium-3 inversely correlate with carbon dioxide, which acts as a carrier gas for helium-3. The scientists have proved that carbon dioxide was also coming from the mantle.

A geologic cross section of the Los Angeles Basin from the southwest to northeast.

At the 32 km (20 miles) deep bottom of nearby wells, a metamorphic rock, called blueschist has been found. This finding suggests the Newport-Inglewood fault is an ancient subduction zone, where two tectonic plates collided in the past, contradicting the, currently popular, scientific hypothesis that supports the existence of a low-angle thrust fault (the décollement), below the LA Basin's surface.

“About 30 million years ago, the Pacific plate was colliding with the North American plate, which created a subduction zone at the Newport-Inglewood fault,” Boles explained. “Then somehow that intersection jumped clear over to the present San Andreas Fault, although how this occurred is really not known. This paper shows that the mantle is leaking more at the Newport-Inglewood fault zone than at the San Andreas Fault, which is a new discovery.”