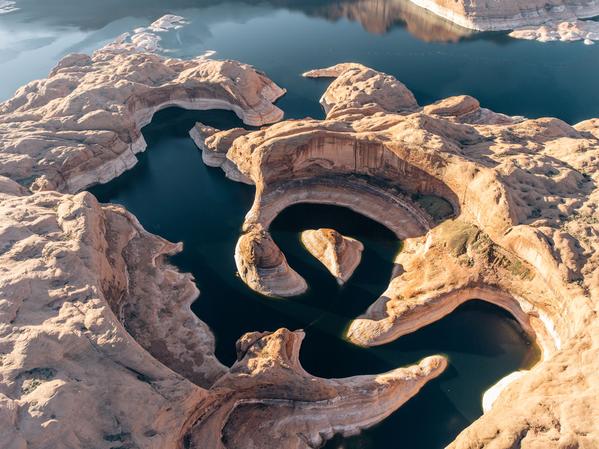 Lake Powell, a reservoir on the Colorado river, situated on the border between Utah and Arizona is drying out. It is currently at 45 percent of its normal capacity and at a risk of falling below 1075 feet (327.6 m) above sea level by September 2015. If this happens, it will set the record for the lowest level ever recorded.

Lake Powell is the second largest man-made water reservoir in the United States with the capacity of  24,322,000 acre feet (3.0001×1010 m3) of water when full. It acts as a water storage facility for the Upper Basin states of Colorado, Utah, Wyoming, and New Mexico. The Colorado River Basin supplies water to 40 million people in seven western states.

Changes in the lake's capacity are documented in the series of natural-color images taken by the Landsat series of satellites between 1999 and 2015.

In 1999 the lake was a clear, dark blue color and almost at it's full capacity. The sediment-filled Colorado River appeared green-brown in the imagery. As a result of a prolonged drought in the American Southwest in the early 21st century, in combination with water overuse, the side canyons of the lake, feeding the reservoir, thinned and shortened, which was a first signal of a drop in the lake level. In 2003, lake's side branches had all retreated, and by 2005 the water levels dramatically fell, according to the U.S. Department of the Interior Bureau of Reclamation.

The water levels began to restore again in 2011 and 2012, due to significant snowfall, although the lake never reached it's capacity from 1999. However, this effect did not last long, as the rainfall and snowfall have been below the region's average since, minimizing the water inflow to Lake Powell.

Its water levels have recently fluctuated between 39 and 51 percent of it's full capacity, being at a risk of falling to so-called "dead pool". If that happens, there will no longer be enough water for it to flow through the dam's gates or to power the West's electricity grid. The Colorado river serves Wyoming ranches, Arizona agricultural plantations and Las Vegas. It is crucial to the food industry in California and it acts as a water supplier to the growing desert cities across the southwest.

Current climate forecast models predict precipitation to decline by 20-25 percent, by the end of this century, over most of California, southern Nevada, and Arizona. In combination with the booming increase in urban populations, the decrease in precipitation levels could prove to be a significant challenge to Western water managers in the near future.