The interaction of solar winds and Earth’s atmosphere produces northern lights, but to scientists this interaction is more than a light display. It produces many questions about the role it plays in Earth’s meteorological processes and the impact on the planet’s atmosphere.

To help answer some of these questions, NASA suborbital sounding rockets carrying university-developed experiments – the Mesosphere-Lower Thermosphere Turbulence Experiment (M-TeX) and Mesospheric Inversion-layer Stratified Turbulence (MIST) – were launched into auroras from the Poker Flat Research Range in Alaska on January 26, 2015. The experiments explore the Earth’s atmosphere’s response to auroral, radiation belt and solar energetic particles and associated effects on nitric oxide and ozone.

This composite shot of all four sounding rockets for the M-TeX and MIST experiments is made up of 30 second exposures. The rocket salvo began at 09:13 UTC. 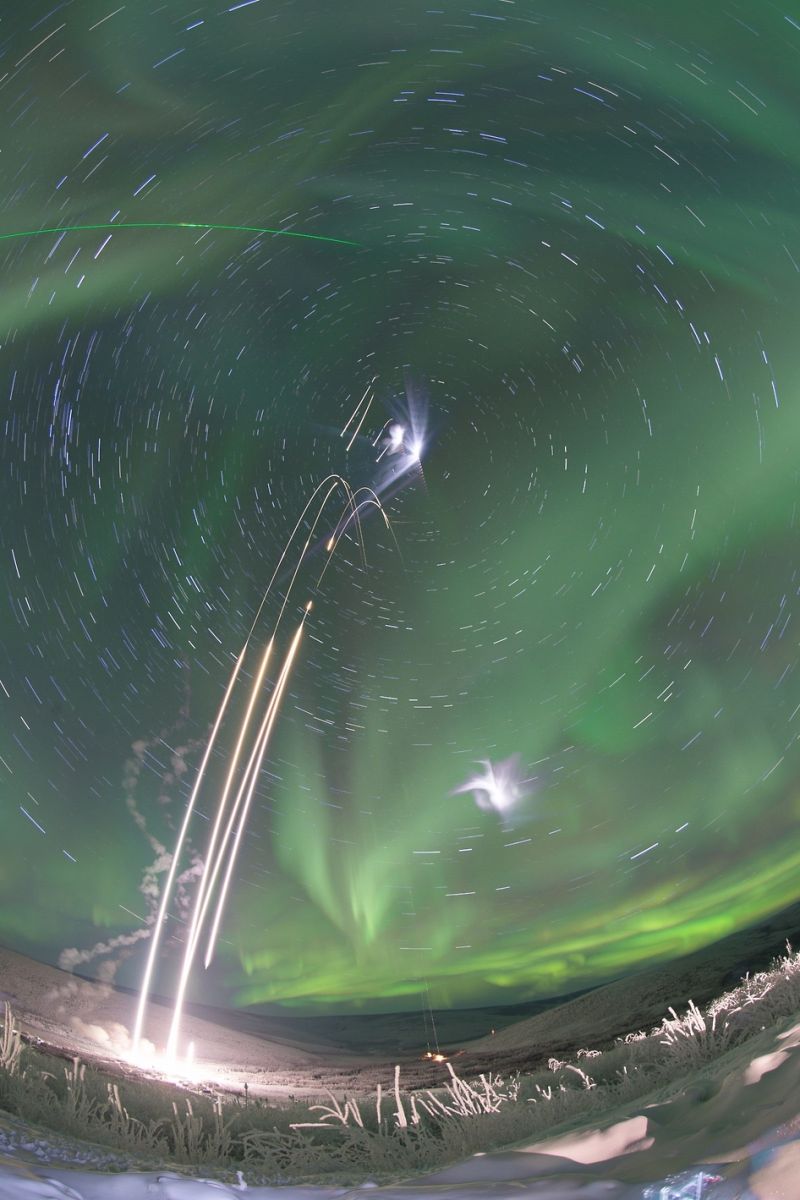 The results from this investigation will add data to current computer models to allow better prediction and understanding of atmospheric circulation.

Specifically scientists are trying to answer questions about a) how the transport of nitric oxides in the stratosphere and mesosphere depend on meteorological conditions and b) is turbulence the missing link in understanding the vertical transport between the thermosphere and mesosphere that controls how ozone-active chemicals travel downward into the ozone layer.

Turbulence has thus far been difficult to characterize in models due to the wide range of measurements in a wide variety of conditions.

This investigation aims to characterize turbulence under meteorological conditions that create a layer of increasing temperatures in the mesosphere, called the mesospheric inversion layer (MIL), and to define a representative value for turbulence to be used in atmospheric models.

Both experiments were launched on the Terrier-Improved Malemute rocket, a two stage sounding rocket with a Terrier first stage and Improved Malemute second stage. This vehicle can reach altitudes of about 600 km with payloads weighing from 180 to 540 kg.