Most of the US Southwest region has been suffering from a persistent lack of rain and snow. More than 64 million people are directly affected by drought in the Southwest and Southern Plains, and far more are indirectly affected, mostly in agricultural sector.

California is experiencing the worst drought conditions. The past three years have been the driest in California history, and it looks like 2014 will be the hottest on record. Since April 2014, the entire state of California was in some stage of drought. 80 % was in extreme drought and 55 % was classified with exceptional drought in middle of November 2014. In period between October 1, 2013 to September 30, 2014, California received just 20 % of normal rainfall and 18 % of it snowpack. Reservoirs in the state collectively stood at 57 % of its capacity. 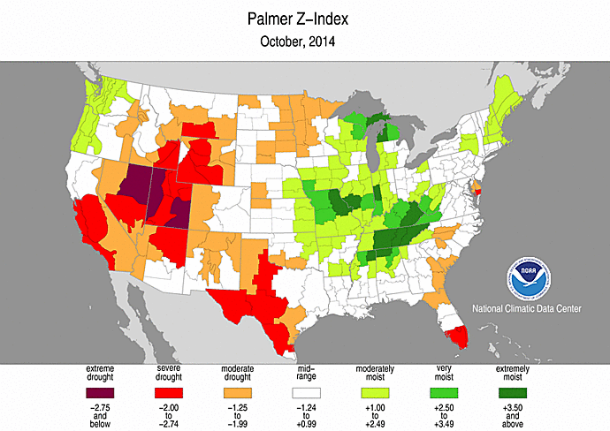 According to the weekly U.S. Drought Monitor (USDM), about 29.6 percent of the contiguous U.S. (CONUS) (about 24.7 percent of the U.S. including Alaska, Hawaii, and Puerto Rico) was classified as experiencing moderate to exceptional (D1-D4) drought at the end of October. 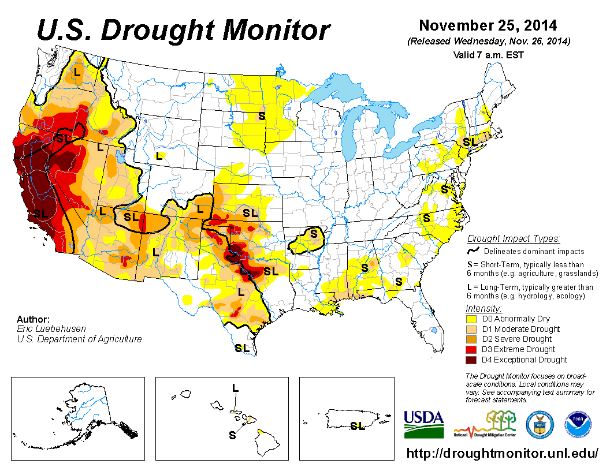 An unsettled, somewhat milder weather pattern developed over the nation, with locally heavy rain in parts of the south affording some drought relief. Farther east, showers in the Mid-Atlantic and Northeast mostly prevented expansion of abnormal dryness, though rain largely bypassed southern Pennsylvania during the period. Locally heavy downpours eased drought in the southeastern Plains. In contrast, the West’s core drought areas remained dry, though additional heavy rain and mountain snow were observed in parts of the Northwest.