Australian astronomers have found out that massive galaxies in the Universe have stopped making their own stars and are instead snacking on nearby galaxies.

They looked at more than 22 000 galaxies and found that while smaller galaxies were very efficient at creating stars from gas, the most massive galaxies were much less efficient at star formation, producing hardly any new stars themselves, and instead grew by eating other galaxies.

“All galaxies start off small and grow by collecting gas and quite efficiently turning it into stars, then every now and then they get completely cannibalized by some much larger galaxy,” according to Dr Aaron Robotham, based at The University of Western Australia node of the International Centre for Radio Astronomy Research (ICRAR).

“The Milky Way hasn’t merged with another large galaxy for a long time but you can still see remnants of all the old galaxies we’ve cannibalized. We’re also going to eat two nearby dwarf galaxies, the Large and Small Magellanic Clouds, in about four billion years,” he said. He even stated that the Milky Way would eventually get its comeuppance when it merged with the nearby Andromeda Galaxy in about five billion years.

“Technically, Andromeda will eat us because it’s the more massive one,” he concluded.

This simulation shows what will happen when the Milky Way and Andromeda get closer together and then collide, and then finally come together once more to merge into an even bigger galaxy.

Dr Robotham said as galaxies grew they had more gravity and could therefore more easily pull in their neighbors. The reason star formation slowed down in really massive galaxies was thought to be because of extreme feedback events in a very bright region at the center of a galaxy known as an active galactic nucleus.“The topic is much debated, but a popular mechanism is where the active galactic nucleus basically cooks the gas and prevents it from cooling down to form stars. If you waited a really, really, really long time that would eventually happen but by really long I mean many times the age of the Universe so far,” he added.

Ultimately, gravity is expected to cause all the galaxies in bound groups and clusters to merge into a few super-giant galaxies, although we will have to wait many billions of years before that happens. 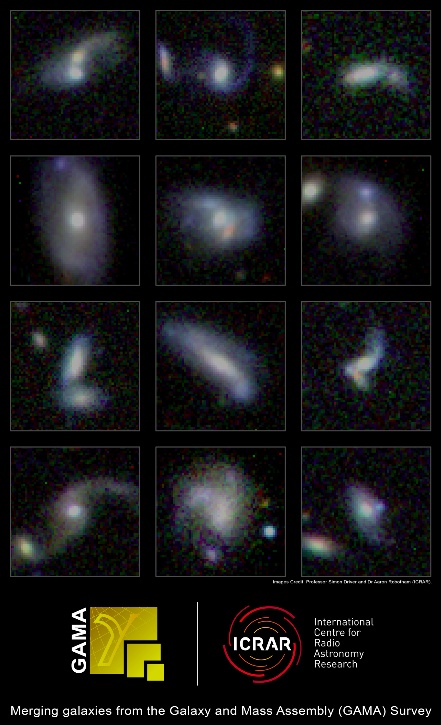 Some of the many thousands of merging galaxies identified within the GAMA survey.
Credit: Professor Simon Driver and Dr Aaron Robotham, ICRAR.

Almost all of the data for the research was collected with the Anglo-Australian Telescope in New South Wales as part of the Galaxy And Mass Assembly (GAMA) survey, led by Professor Simon Driver at ICRAR.

The GAMA survey involves more than 90 scientists and took seven years to complete.

This study is one of more than 60 publications to have come from the work, with another 180 in progress.