Hurricane "Odile" crashed into Mexico's Los Cabos resorts on Monday, September 15, 2014, forcing about 30 000 people to seek shelters. It is the strongest hurricane to make landfall this year anywhere and the strongest on record to hit Baja California.

Odile was a Category 3 hurricane on the five-level Saffir-Simpson Hurricane Wind scale packing winds of 205 km/h (125 mph) when it made landfall near Cabo San Lucas. Forecasters warn that heavy rains of up to 46 centimeters (18 inches) in some areas could produce life-threatening floods and mudslides.

Some 26 000 foreign tourists and another 4 000 Mexicans were staying in 18 hotels converted into temporary shelters. Power in Cabo San Lucas is cut off to prevent electrocutions.

Schools are closed on Monday and independence day festivities are called off.

It's center will move near or over the Baja California through Tuesday. 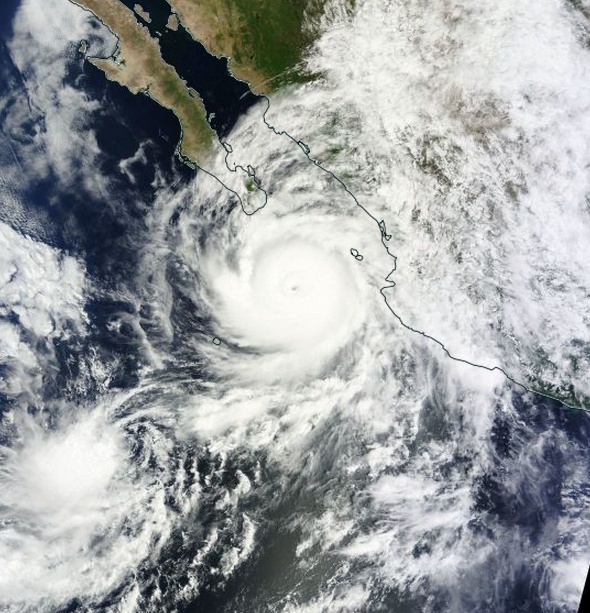 This is happening: We are waiting for #Odile to hit Los Cabos soon. It's going to be a looong night. pic.twitter.com/fKtOdL3q8s

Steady weakening is forecast during the next 48 hours.

Odile is expected to produce rainfall amounts of 15 – 30 cm (6 to 12 inches) with isolated maximum totals of around 45 cm (18 inches) across much of the Baja California peninsula through Friday.  These rains are likely to result in life-threatening flash floods and mud slides. Rainfall amounts of 5 – 10 cm (2 to 4 inches) are possible along coastal portions of the Mexican states of Sinaloa and Sonora.

Swells from Odile will affect portions of the southwestern coast of Mexico during the next couple of days and are affecting southern portions of the Baja California peninsula and the southern Gulf of California. These swells will likely cause life-threatening surf and rip current conditions.

Summary of watches and warnings in effect

A hurricane warning is in effect for:

A hurricane watch is in effect for:

* the west coast of Baja California Sur from north of Punta Abreojos to Punta Eugenia.

A tropical storm warning is in effect for:

A tropical storm watch is in effect for: