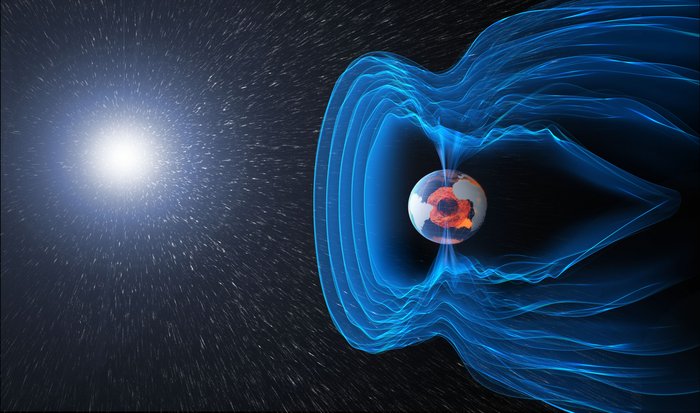 ​The first set of high-resolution results from ESA’s three-satellite Swarm constellation reveals the most recent changes in the magnetic field that protects us from cosmic radiation and charged particles that bombard Earth.

Magnetic field is in a permanent state of flux. Magnetic north wanders, and every few hundred thousand years the polarity flips so that a compass would point south instead of north. Moreover, the strength of the magnetic field constantly changes – and it is currently showing signs of significant weakening. (ESA)

Measurements made by Swarm over the past six months confirm the general trend of the field’s weakening, with the most dramatic declines over the Western Hemisphere. But in other areas, such as the southern Indian Ocean, the magnetic field has strengthened since January.

The weak field has indirectly caused many temporary satellite ‘hiccups’ (called Single Event Upsets) as the satellites are exposed to strong radiation over this area. (ESA)

This animation shows changes in Earth’s magnetic field from January to June 2014 as measured by ESA’s Swarm trio of satellites: 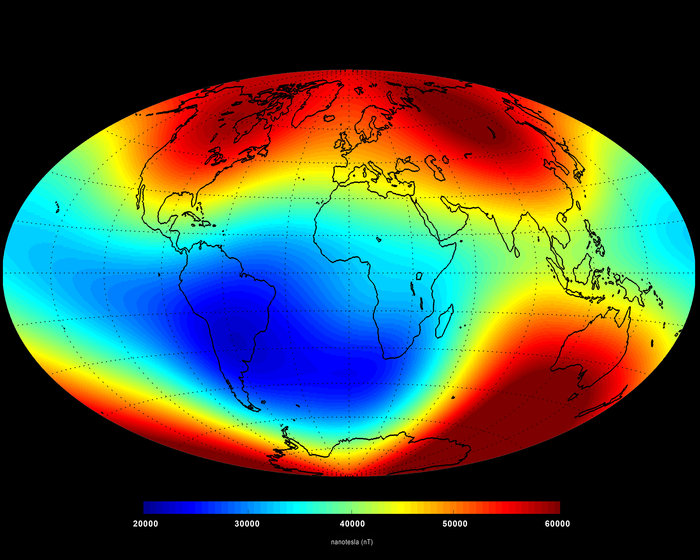 ‘Snapshot’ of the main magnetic field at Earth’s surface as of June 2014 based on Swarm data. The measurements are dominated by the magnetic contribution from Earth’s core (about 95%) while the contributions from other sources (the mantle, crust, oceans, ionosphere and magnetosphere) make up the rest. Red represents areas where the magnetic field is stronger, while blues show areas where it is weaker. image copyright: ESA/DTU Space 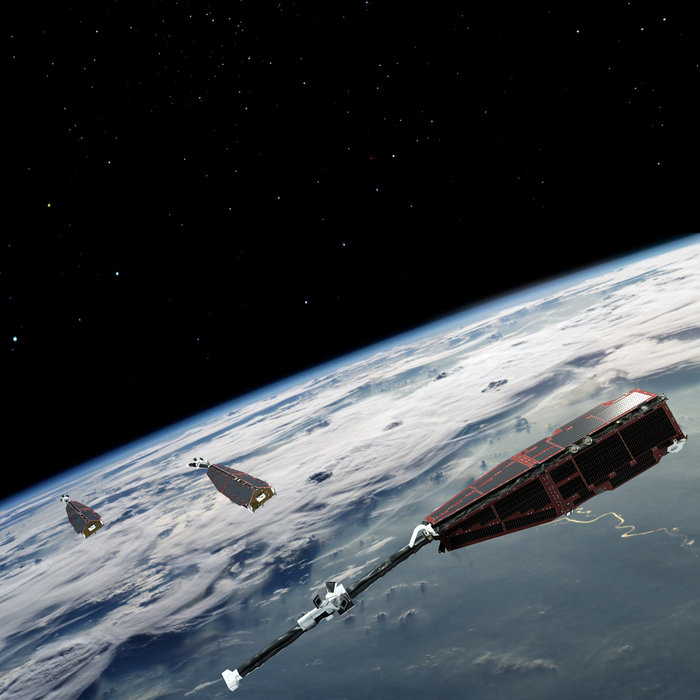 Swarm is ESA's first Earth observation constellation of satellites. The three identical satellites are launched together on one rocket. Two satellites orbit almost side-by-side at the same altitude – initially at about 460 km, descending to around 300 km over the lifetime of the mission. The third satellite is in a higher orbit of 530 km and at a slightly different inclination. The satellites’ orbits drift, resulting in the upper satellite crossing the path of the lower two at an angle of 90° in the third year of operations.

The different orbits along with satellites’ various instruments optimise the sampling in space and time, distinguishing between the effects of different sources and strengths of magnetism. Image copyright: ESA/AOES Medialab

Swarm was launched in November 2013 and is providing unprecedented insights into the complex workings of Earth’s magnetic field. The objective of the Swarm mission is to provide the best-ever survey of the geomagnetic field and its temporal evolution as well as the electric field in the atmosphere using a constellation of 3 identical satellites carrying sophisticated magnetometers and electric field instruments.

Over the coming months, scientists will analyse the data to unravel the magnetic contributions from other sources, namely the mantle, crust, oceans, ionosphere and magnetosphere.

This will provide new insight into many natural processes, from those occurring deep inside our planet to space weather triggered by solar activity. In turn, this information will yield a better understanding of why the magnetic field is weakening.

41 000 years ago, a complete and rapid reversal of the geomagnetic field occurred. As a consequence, the Earth nearly completely lost its protection shield against hard cosmic rays, leading to a significantly increased radiation exposure, a new study led by…

A growing number of scientists are starting to worry the magnetic pole shift, that seems to be underway, is the real culprit behind climate change. Not man made air pollution, not the Sun, not the underground volcanic activity heating up the oceans, but the slow…