Peru's Ubinas volcano has been showing signs of an impending eruption since the mid-2013, highlighted by the appearance of fresh lava dome in March 2014. IGP's Observatorio Volcanologico de Arequipa (IGP-OVA) reported that during March 29 – April 2 seismicity at Ubinas increased significantly with energetic tremor (indicating magma ascent and degassing) and small explosions.

By April 12, 2014, a new round of evacuations has begun and the volcano has been restless ever since. On the morning of June 3rd a relatively strong eruption was followed by ash emissions that rose to 10 km altitude and drifted east.

Local media is now reporting that the volcano has begun launching volcanic rocks between 10 and 20 centimeters in length. Reports indicate that some of these rocks have been displaced as far as almost two kilometers. The closest village, Querapi, is located four kilometers away from the volcano.

Geologist Jersy Marino told Andina news agency that "Just like [the lava] sometimes is pulverized and comes out as ash, which falls on nearby towns, that same lava also fragments into blocks that are 10 centimeters to two meters long, and they're launched towards the sides of the volcano. We call them ballistic projectiles." (PeruThisWeek)

Marino added that local residents should stay far away from Ubinas, as continued explosive activity is expected.

The following image was captured by webcam located 28 km northwest of Ubinas on June 6, 2014. 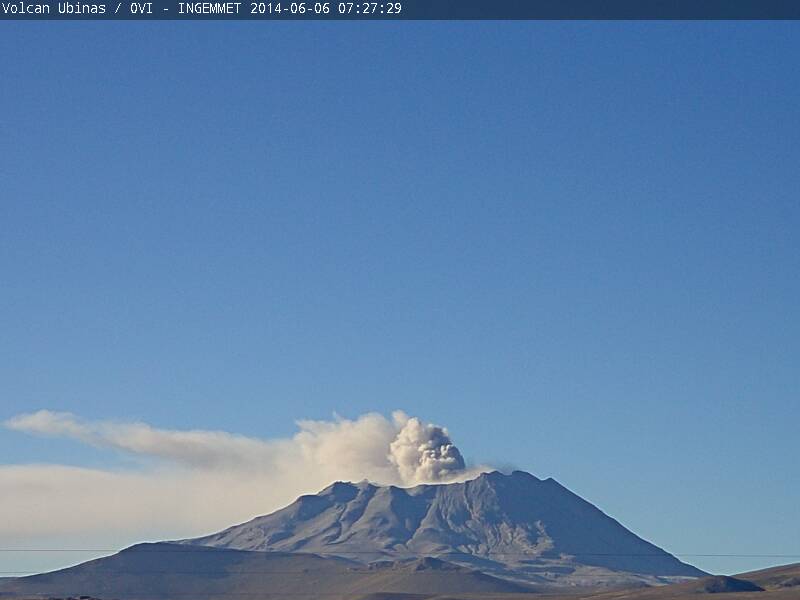