Guatemalan authorities reported yesterday that explosions at Fuego volcano intensified to moderate and strong. Gray columns of smoke and ash rose up to 4.5 km above sea level, moving 10 – 12 km southwest and northwest. Incadescent pulses remained at 200 meters above the southwest crater.

Explosions generated small vibrations in the villages of Panimaché, Morelia, Haghia Sophia, and some municipalities and departments such as Yepocapa, StaLucia Cotz, Acatenango Alotenango Pochuta, Escuintla, and Chimaltenango. Ashfall was reported in Morelia, Panimaches I and ll, Hagia Sophia and other nearby communities. The lava flow remains calm.

If the activity persists it may generate lava and pyroclastic flows running down the ravines around Fuego, located between the departments of Escuintla, Sacatepequez and Chimaltenango.

The CONRED remains on the institutional green alert and called on the population that lives next to the volcano to remain calm, and be aware of the information from the authorities before an eventual evacuation. 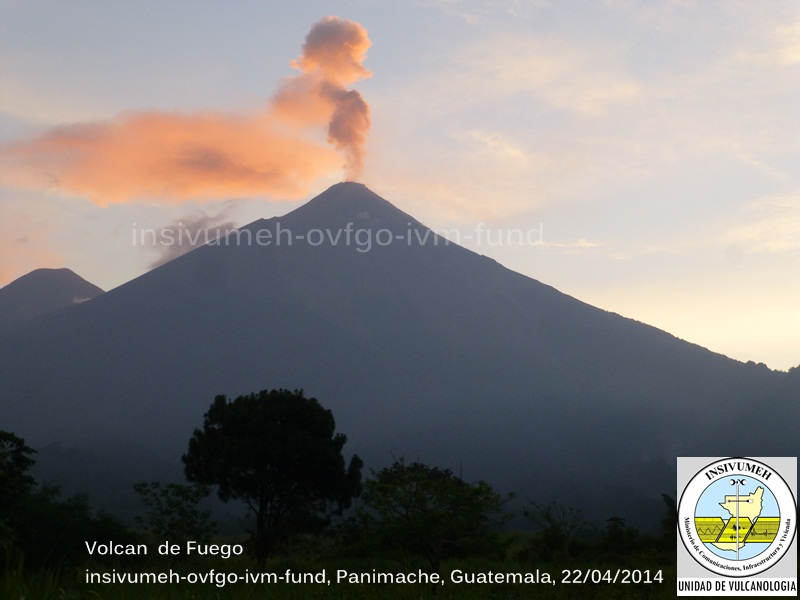 Activity at the volcano increased during April 9 – 10, along with the number and magnitude of explosions. Ash plumes rose 850 m above the crater and drifted 10 km W and SW. Explosions were heard in areas up to 15 km away and shock waves were detected 8 km away. At night incandescent blocks in the Santa Teresa (S), Ceniza (SSW), and Trinidad (S) drainages were noted. Check GVP's weekly volcano database entries for Fuego volcano since 2000.

Volcán Fuego, one of Central America's most active volcanoes, is one of three large stratovolcanoes overlooking Guatemala's former capital, Antigua. The scarp of an older edifice, Meseta, lies between 3763-m-high Fuego and its twin volcano to the north, Acatenango. Construction of Meseta volcano dates back to about 230,000 years and continued until the late Pleistocene or early Holocene. Collapse of Meseta volcano may have produced the massive Escuintla debris-avalanche deposit, which extends about 50 km onto the Pacific coastal plain.

Growth of the modern Fuego volcano followed, continuing the southward migration of volcanism that began at Acatenango. In contrast to the mostly andesitic Acatenango volcano, eruptions at Fuego have become more mafic with time, and most historical activity has produced basaltic rocks. Frequent vigorous historical eruptions have been recorded at Fuego since the onset of the Spanish era in 1524, and have produced major ashfalls, along with occasional pyroclastic flows and lava flows. (GVP)