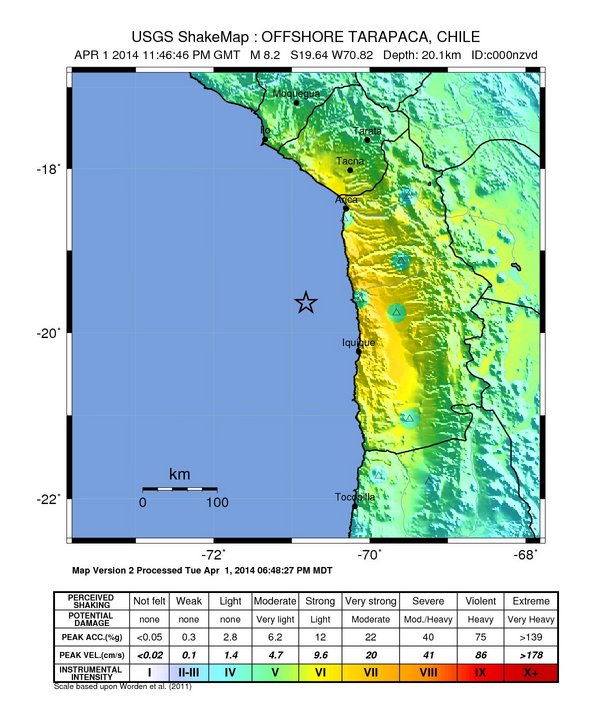 This earthquake was followed by series of strong aftershocks with strongest recorded as M 6.2 with epicenter 88 km N of Iquique, Chile. 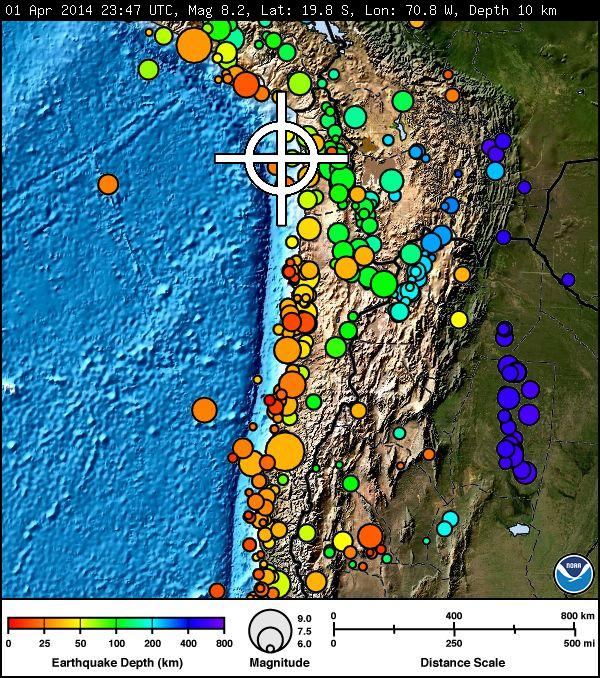 Orange alert level was issued for economic losses. Significant damage is likely and the disaster is potentially widespread. Estimated economic losses are less than 1% of GDP of Chile. Past events with this alert level have required a regional or national level response.

A tsunami warning and watch are in effect for Chile and Peru. 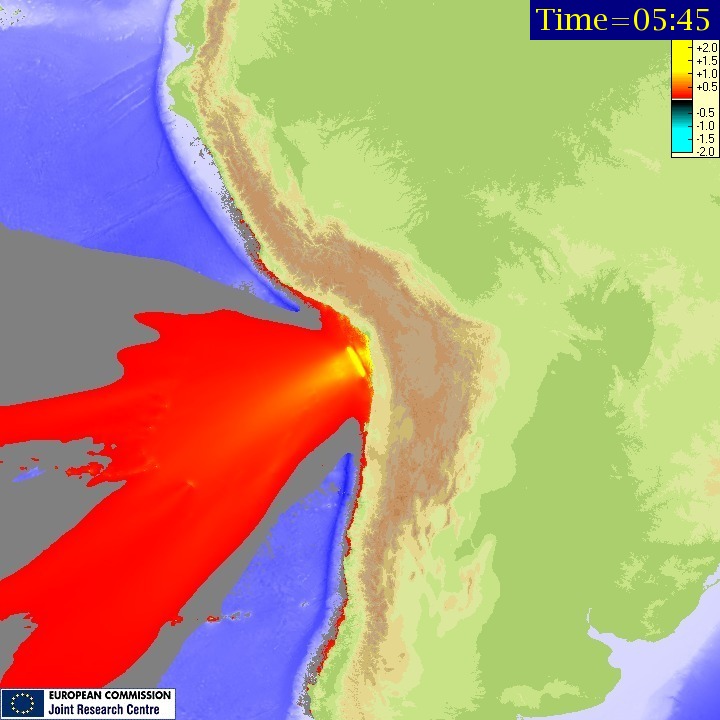 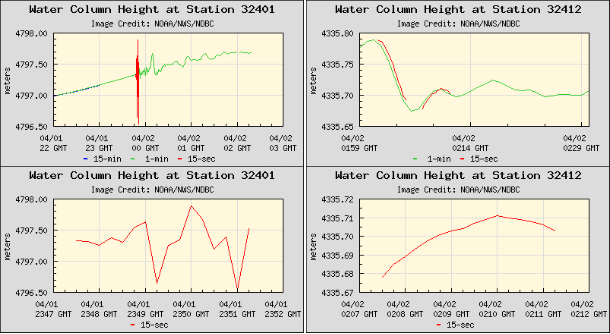 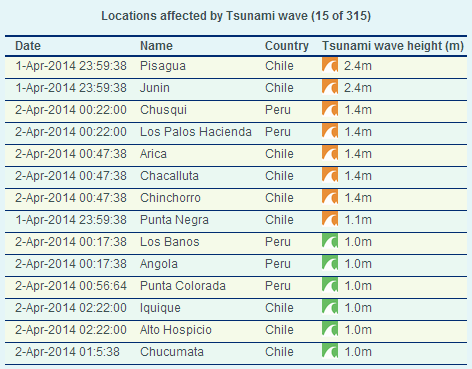 The tsunami warning has officially been canceled. Many of those evacuated due to the tsunami have returned home.. There are many reports of infrastructural damage in Chile and Peru. This massive earthquake occurred after numerous very strong earthquakes during the last couple of weeks.

A couple of buildings have been flooded because of the tsunami in Iquique. The mayor of Iquique said the water entered  3 blocks inland or at least 100 meter.

80% of the fishing fleet in La Caleta is damaged!

Landslides have killed another 3 people (1 woman and 2 men).

Shortly after the earthquake looting started in a few cities. More police and special forces are on their way by plane to the northern Chile to assist the local police in preventing further looting.

The death toll from this earthquake still remains at 5 – with them all being indirect. (07:00 UTC)

There has been slight damage to buildings, and the power network along the coast. Checks are being done as to the structural safety of these buildings before people go back in.

A number of people have been injured (at least 13 across the region).

The chaos, and a collapsed wall, allowed some 300 inmates to escape a women's prison in Iquique, the city closest to the huge quake's epicenter. Authorities said 110 of them had been recaptured.

The sea rushed 200 meters inland, flooding some streets, authorities said. Fishermen reported that 80 boats had been destroyed, sunk or floated out to sea.

The following videos were recorded on April 1, 2014:

Update 10:39 UTC, April 2: A 6th person has been killed by the earthquake, Minister of the Interior Rodrigo Peñalillo said to the press a shortwhile ago. (ER)

The April 1, 2014 M8.2 earthquake in northern Chile occurred as the result of thrust faulting at shallow depths near the Chilean coast. The location and mechanism of the earthquake are consistent with slip on the primary plate boundary interface, or megathrust, between the Nazca and South America plates. At the latitude of the earthquake, the Nazca plate subducts eastward beneath the South America plate at a rate of 65 mm/yr. Subduction along the Peru-Chile Trench to the west of Chile has led to uplift of the Andes mountain range and has produced some of the largest earthquakes in the world, including the 2010 M 8.8 Maule earthquake in central Chile, and the largest earthquake on record, the 1960 M 9.5 earthquake in southern Chile.

The April 1 earthquake occurred in a region of historic seismic quiescence – termed the northern Chile or Iquique seismic gap.  Geodetic modeling indicates that the subducting and overriding plates are partially to fully-locked, implying that large earthquake are possible along the plate boundary megathrust. Historical records indicate a M 8.8 earthquake occurred within the Iquique gap in 1877, which was preceded immediately to the north by an M 8.8 earthquake in 1868.

A recent increase in seismicity rates has occurred in the vicinity of the April 1 earthquake. An M6.7 earthquake with similar faulting mechanism occurred on March 16, 2014 and was followed by 60+ earthquake of M4+, and 26 earthquakes of M5+. The March 16 earthquake was also followed by three M6.2 events on March 17, March 22, and March 23. The spatial distribution of seismicity following the March 16 event migrated spatially to the north through time, starting near 20oS and moving to ~19.5oS. The initial location of the April 1 earthquake places the event near the northern end of this seismic sequence. Other recent large plate boundary ruptures bound the possible rupture area of the April 1 event, including the 2001 M 8.4 Peru earthquake adjacent to the south coast of Peru to the north, and the 2007 M 7.7 Tocopilla, Chile and 1995 M 8.1 Antofagasta, Chile earthquakes to the south. Other nearby events along the plate boundary interface include an M 7.4 in 1967 as well as an M 7.7 in 2005 in the deeper portion of the subduction zone beneath onland Chile. 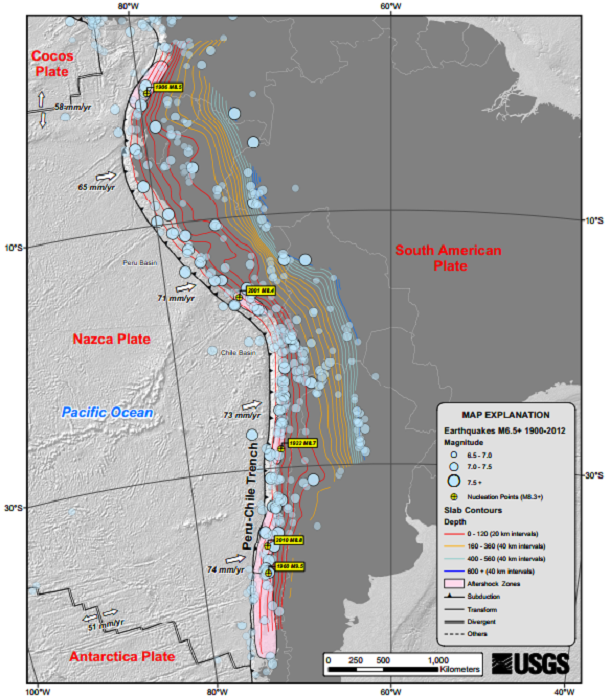