Researchers at Northern Arizona University using the Spitzer Space Telescope discovered that what was thought to be a large asteroid called Don Quixote is in fact a comet. Don Quixote, whose journey stretches to the orbit of Jupiter wandered its lone, intrepid path, passing before the eyes of scientists for 30 years.

The results of an ongoing project at NAU show that Don Quixote is not, in fact, a dead comet, as previously believed, but it has a faint coma and tail. In fact, this object, the third-biggest near-Earth asteroid known, skirts Earth with an erratic, extended orbit and is "sopping wet," said David Trilling of Northern Arizona University, with large deposits of carbon dioxide and presumably water ice. Don Quixote is about 18 kilometers (11 miles) long.

The implications have less to do with potential impact, which is extremely unlikely in this case, and more with “the origins of water on Earth,” Trilling said. Comets may be the source of at least some of it, and the amount on Don Quixote represents about 100 billion tons of water—roughly the same amount found in Lake Tahoe.

Mommert said it’s surprising that Don Quixote hasn’t been depleted of all of its water, especially since researchers assumed that it had done so thousands of years ago. But finding evidence of CO2, and presumably water, wasn’t easy. 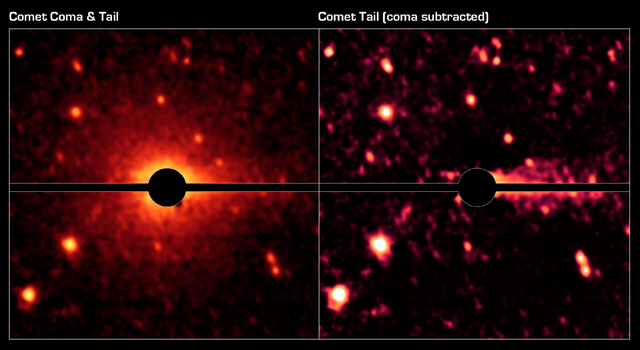 The left image shows Don Quixote's coma and tail – features of comets – as revealed in infrared light by Spitzer. The coma appears as a faint glow around the center of the body, caused by dust and gas. The tail, which appears more clearly in the right image, points towards the right-hand side of Don Quixote, into the direction opposite of the sun. The right image represents a more elaborate image processing step, in which the glow of the coma has been removed based on a model comet coma.Bright speckles around Don Quixote are background stars; the horizontal bar covers image artifacts caused by the image processing.

During an observation of the object using Spitzer in August 2009, Mommert and Trilling found that it was far brighter than they expected. “The images were not as clean as we would like, so we set them aside,” Trilling said.

Much later, though, Mommert prompted a closer look, and partners at the Harvard-Smithsonian Center for Astrophysics found something unusual when comparing infrared images of the object: something, that is, where an asteroid should have shown nothing. The “extended emission,” Mommert said, indicated that Don Quixote had a coma—a comet’s visible atmosphere—and a faint tail.

Mommert said this discovery implies that carbon dioxide and water ice also might be present on other near-Earth objects.

This study confirmed Don Quixote’s size and the low, comet-like reflectivity of its surface. Mommert is presenting the research team’s findings this week at the European Planetary Space Conference in London. 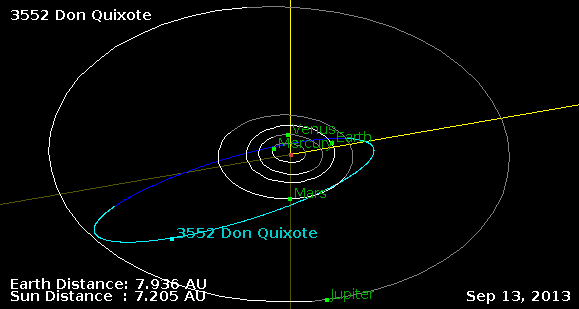 In essence, other than their chemical composition, the main difference between an asteroid and a comet is in their orbits. While asteroids have typical elliptical orbit and their distance from the Sun does not vary too much, comets have eccentric orbit and their distance from the Sun varies greatly. Comets can also travel three times faster than asteroids and are considered as legitimate threat to Earth.

The following video explains them in more depth:

If you want to learn more about the difference between asteroids and comets read this National Geographic article.