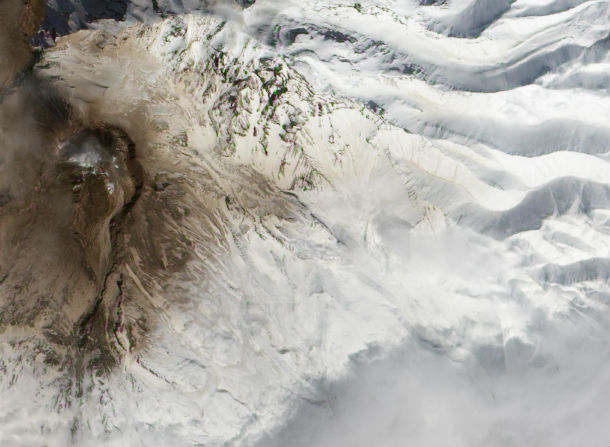 Explosive-extrusive-effusive eruption of Shiveluch volcano, Kamchatka continues. An episode of intense, but short, activity was recorded at Shiveluch volcano, Kamchatka, Russia on June 26/27, 2013. The event was most likely a partial collapse of the existing dome with possible explosions, since the ash emitted was mostly red (indicating it originated from old, altered lava).

Because of the lack of visibility experts at Tokyo VAAC estimated the height of the ash plume at about 10 to 12 km, using the seismic record from the volcano. KVERT reported ashfall SW of the volcano reaching villages Klyuchi (2mm of ash measured) and Lazo (1mm of ash). Ash plumes were extending to the south-east and south-west of the volcano. Two more ash explosions occurred at 17:06 and 22:01 UTC on June 27, 2013. Ash plumes rose up to 7 and 6 km a.s.l., respectively. 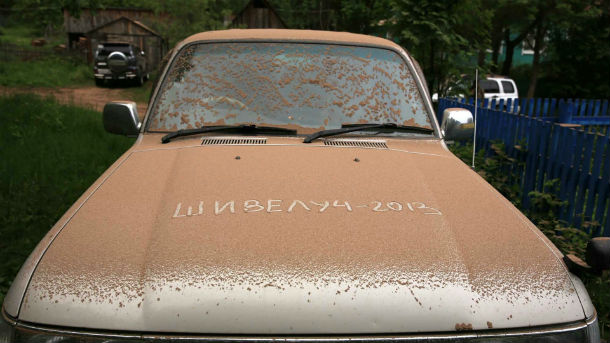 Ash covers the car in village beneath Shiveluch volcano on June 27, 2013 (Credit: Yu.Demyanchuk/Volkstat)

According to visual and satellite data, a viscous lava flow continues to effuse on the northern flank of the lava dome, strong and moderate fumarolic activity and incandescence of the dome summit and hot avalanches accompanies this process. Satellite data showed a thermal anomaly over the lava dome all week.

The Aviation Color Code was at first raised to RED but was later changed to ORANGE. Besides Shiveluch, three other Kamchatkan volcanoes are currently at ORANGE level – Plosky Tolbachik, Kizimen and Karymsky.

Sheveluch is one of the biggest volcanic structures in Kamchatka. The volcano includes three main units: Stary Sheveluch, the old caldera and active apparatus Molodoy Sheveluch. The volcano is located on the crossing of the Kurile-Kamchatkan and Aleutian Arcs, at a distance of 50 km from Klyuchi and of 450 km from Petropavlovsk-Kamchatsky.

Featured image: A break in the clouds revealed Shiveluch Volcano’s smoldering lava dome on April 9, 2013. This natural-color image was collected by the Advanced Land Imager (ALI) on the Earth Observing-1 (EO-1) satellite.