The Sea of Okhotsk sits above a subduction zone, where the Pacific Plate dives beneath the North America Plate. Some scientists agree that there is also a microplate, a small tectonic plate, beneath the sea (Okhotsk and Amur microplates that are respectively part of North America and Eurasia). This setting makes for deep earthquakes in the subducted Pacific plate crust. The epicenter of M 8.3 earthquake that struck the area on May 24, 2013, as a result of normal faulting, was registered at depth of 608.9km (378.4miles).

Some researchers estimate the Okhotsk quake could surpassed the depth of deepest earthquake meassured – M 8.2 quake that hit northern Bolivia on June 9, 1994 at depth of 631 km. 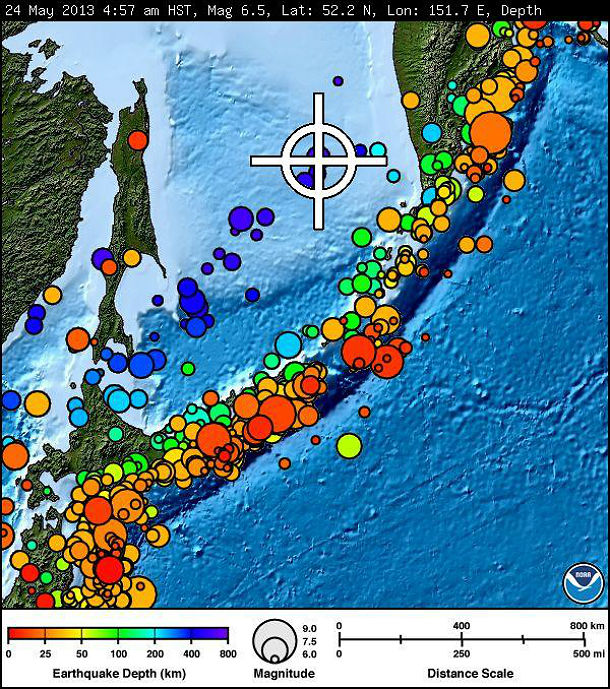 This map shows May 24, 2013 earthquake and historical seismicity with epicenter depths and magnitudes (Credit: NOAA/PTWC)

The shaking traveled far across Russia and it was felt in 6,400 km (4,000 miles) far Moscow. The waves also crossed the United States. This video below by Incorporated Research Institutions for Seismology (IRIS) shows the horizontal and vertical motion recorded as seismic waves from the magnitude-8.3 earthquake in Russia's Sea of Okhotsk pass through the United States.

At the latitude of this earthquake, the Pacific and North America plates are converging at a rate of approximately 78 mm/yr in a west-northwest – east-southeast direction, resulting in the subduction of the Pacific plate beneath Eurasia at the Kuril-Kamchatka trench. According to USGS, the depth and faulting mechanism of the Okhotsk's M 8.3 earthquake indicate that it ruptured a fault deep within the subducting Pacific lithosphere rather than on the shallow thrust interface between the two plates.

This deep section of the Pacific slab beneath the Sea of Okhotsk has hosted several large earthquakes in the past – four M6+ within 200 km of the May 24, 2013 event since 1988. These included a M 7.7 earthquake in July 2008, 115 km to the southwest at a depth of 630 km, and a M 7.3 event in November of the same year, 95 km to the southeast at a depth of 490 km. Considering their great depths, there were no substantial damage or tsunami waves. 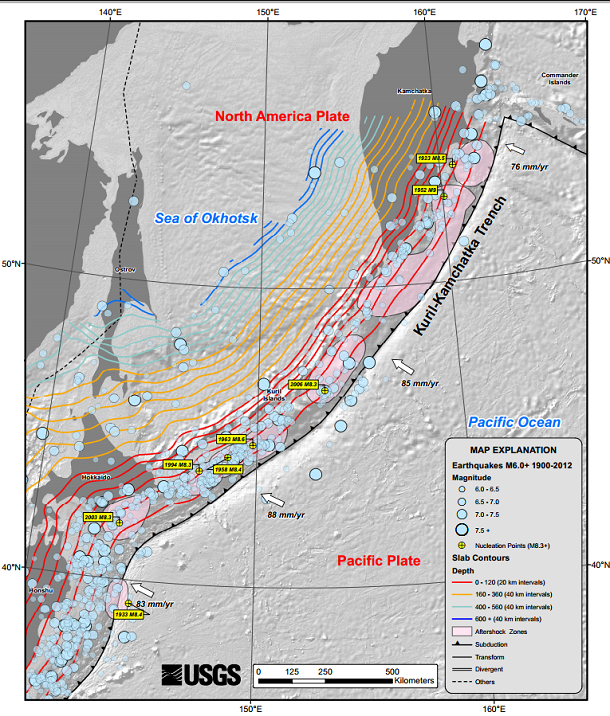 Intermediate-depth (70-300 km) and deep-focus (depth > 300 km) earthquakes are distinguished from shallow earthquakes (0-70 km) by the nature of their tectonic setting, and are in general less hazardous than their shallow counterparts, though they may be felt at great distances from their epicenters. The Pacific slab in the region of the May 24, 2013 earthquake is seismically active to depths of over 650 km.