The earthquake was felt in many parts of Russia, including Siberia, Moscow and St. Petersburg on Baltic Sea. Also people in Japan and India felt this quake.

No tsunami was registered on Russian coast so far and the tsunami warning was lifted.

There are no people within 100 km radius.

Kamchatka Peninsula lies between the Pacific Ocean to the east and the Sea of Okhotsk to the west. Immediately offshore along the Pacific coast of the peninsula runs the 10.5 km (34,400 ft) deep Kuril-Kamchatka trench. Deep-focus seismic events and tsunamis are fairly common in the region. A pair of megathrust earthquakes occurred off the coast on October 16, 1737, and on November 4, 1952, in the magnitude of ~9.3 and 8.2 respectively. 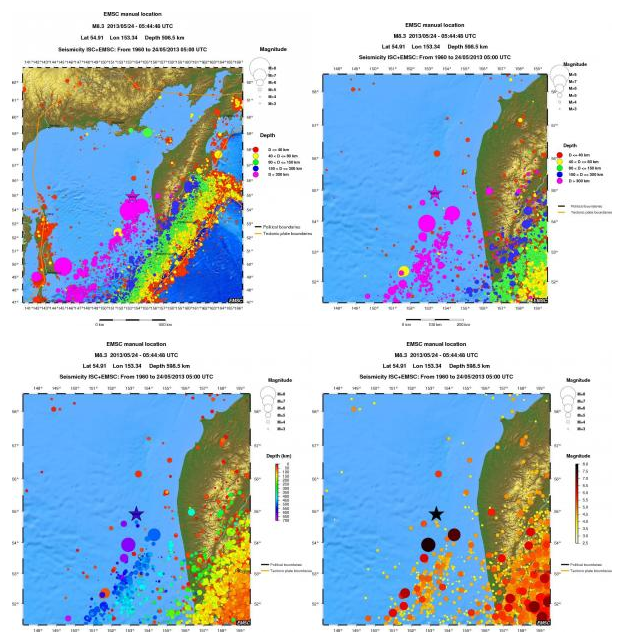 This seismicity maps have been generated by concatenating the ISC catalogue (since 1964), the EMSC Euro-Med Bulletin catalogue and the EMSC Real Time catalogue. Therefore, they show the seismicity from 1964 until the earthquake occurrence.

The May 24, 2013 Mw 8.3 earthquake beneath the Sea of Okhotsk, Russia, occurred as a result of normal faulting at a depth of approximately 600 km. At the latitude of this earthquake, the Pacific and North America plates are converging at a rate of approximately 78 mm/yr in a west-northwest – east-southeast direction, resulting in the subduction of the Pacific plate beneath Eurasia at the Kuril-Kamchatka trench. Note that some authors divide this region into several microplates that together define the relative motions between the larger Pacific, North America and Eurasia plates; these include the Okhotsk and Amur microplates that are respectively part of North America and Eurasia. The depth and faulting mechanism of the May 24 earthquake indicate that it ruptured a fault deep within the subducting Pacific lithosphere rather than on the shallow thrust interface between the two plates.

This deep section of the Pacific slab beneath the Sea of Okhotsk has hosted several large earthquakes in the past – four above M 6 within 200 km of the May 24 event since 1988. These included a M 7.7 earthquake in July 2008, 115 km to the southwest at a depth of 630 km, and a M 7.3 event in November of the same year, 95 km to the southeast at a depth of 490 km. Because of their great depths, none are known to have caused damage. Intermediate-depth (70-300 km) and deep-focus (depth > 300 km) earthquakes are distinguished from shallow earthquakes (0-70 km) by the nature of their tectonic setting, and are in general less hazardous than their shallow counterparts, though they may be felt at great distances from their epicenters. The Pacific slab in the region of the May 24 2013 earthquake is seismically active to depths of over 650 km.

The Kuril-Kamchatka arc extends approximately 2,100 km from Hokkaido, Japan, along the Kuril Islands and the Pacific coast of the Kamchatka Peninsula to its intersection with the Aleutian arc near the Commander Islands, Russia. It marks the region where the Pacific plate subducts into the mantle beneath the Okhotsk microplate, part of the larger North America plate. This subduction is responsible for the generation of the Kuril Islands chain, active volcanoes located along the entire arc, and the deep offshore Kuril-Kamchatka trench. Relative to a fixed North America plate, the Pacific plate is moving towards the northwest at a rate that increases from 75 mm/year near the northern end of the arc to 83 mm/year in the south. Read the rest of tectonic summary here.