European Space Agency (ESA) successfully launched its Proba-V satellite on May 7, 2013 aboard a Vega rocked. This new earth watching satellite was deployed into its Sun-synchronous near-polar orbit at 820 km altitude just 55 minutes after launch. According to ESA, the satellite is now in good health.

The satellite’s vegetation imager was switched on Wednesday, May 15, 2013 in time to get a glimpse of France’s coast along the Bay of Biscay and the lush interior. The data were then sent down to ESA’s Redu centre in Belgium. 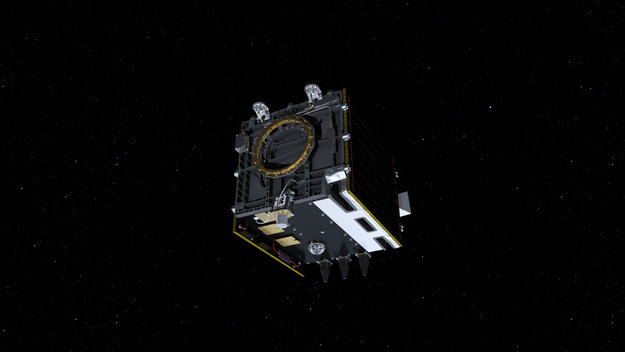 Less than a cubic metre in volume, Proba-V is a miniaturised ESA satellite tasked with a full-scale mission: to map land cover and vegetation growth across the entire planet every two days.

The ‘V’ in Proba-V stands for Vegetation. This mission is extending the data set of the long-established Vegetation instrument, flown as a secondary payload aboard France’s Spot-4 and Spot-5 satellites launched in 1998 and 2002 respectively. The latter satellite’s Vegetation instrument remains operational to this day.

The imager’s continent-spanning 2250 km field of view collects light in the blue, red, near-infrared and mid-infrared wavebands, ideal for monitoring plant and forest growth as well as inland water bodies.

Like its Spot-based predecessors, Proba-V’s Vegetation instrument will build up a continuous daily picture of the state of vegetation across the majority of planet Earth: complete coverage of high latitudes each day, with 90% of equatorial regions also acquired within those same 24 hours. Within two days all of the planet’s land will be imaged.

Once cloud cover is accounted for, a complete composite of Earth’s land cover should be available to the scientific community and a significant number of operational data users every ten days.

Proba-V’s Vegetation instrument boasts improved spatial resolution from to its Spot predecessors: 350 m resolution compared to 1 km for Spot Vegetation, with 100 m resolution available within its central field of view.

PROBA – PRoject for OnBoard Autonomy

Proba stands for PRoject for OnBoard Autonomy. The Proba satellites are among the smallest and most advanced spacecraft ever to be flown by ESA. The first satellite in the series, Proba-1, was launched in October 2001, as a technology demonstration mission, and it is now operating as an Earth Observation Third Party Mission.

Proba-2 is the second of the series, building on nearly eight years of successful Proba-1 experience.

Proba-3 is set for launch in 2017. It is ESA’s – and the world’s – first precision formation flying mission. A pair of satellites will fly together maintaining a fixed configuration as a ‘large rigid structure’ in space to prove formation flying technologies.

The mission will demonstrate formation flying in the context of a large-scale science experiment. The paired satellites will together form a 150-m long solar coronagraph to study the Sun’s faint corona closer to the solar rim than has ever before been achieved. Beside its scientific interest, the experiment will be a perfect instrument to measure the achievement of the precise positioning of the two spacecraft.

Proba-V will provide data to the instrument’s worldwide user community of scientists and service providers as soon as its orbital commissioning – including cross-checks with Spot-5’s Vegetation instrument – is complete and the mission is turned over from ESA’s Directorate of Technical and Quality Management to the Agency’s Earth Observation Programme.

Image on the left:  Copyright ESA–ATG Medialab. – Proba-V will fly a reduced-mass version of the Vegetation instrument currently on board the Spot satellites to provide a daily overview of global vegetation growth. The Proba satellites are part of ESA’s In‑orbit Technology Demonstration Programme: missions dedicated to flying innovative technologies.

Featured image: Copyright: ESA – First raw image from the Proba-V satellite, acquired over France’s west coast on May 15, 2013. The image was generated using the three VNIR bands, blue, red and near-infrared (NIR) superposed, the green being replaced by the NIR. It has not yet been radiometrically or geometrically corrected. Less than a cubic metre in volume, the miniaturised ESA satellite is tasked to map land cover and vegetation growth across the entire planet every two days.