According to latest activity report by Alaska Volcano Observatory (AVO), low-level eruption at Cleveland volcano continues. New explosions were detected at 07:23 UTC and 16:00 UTC on May 6, 2013 by the Okmok network, 120 km (80 mi) to the northeast. Overall however infrasonic data suggest that the eruption may have waned since yesterday. The volcano is obscured by clouds in satellite data, but a thermal anomaly continues to be visible. 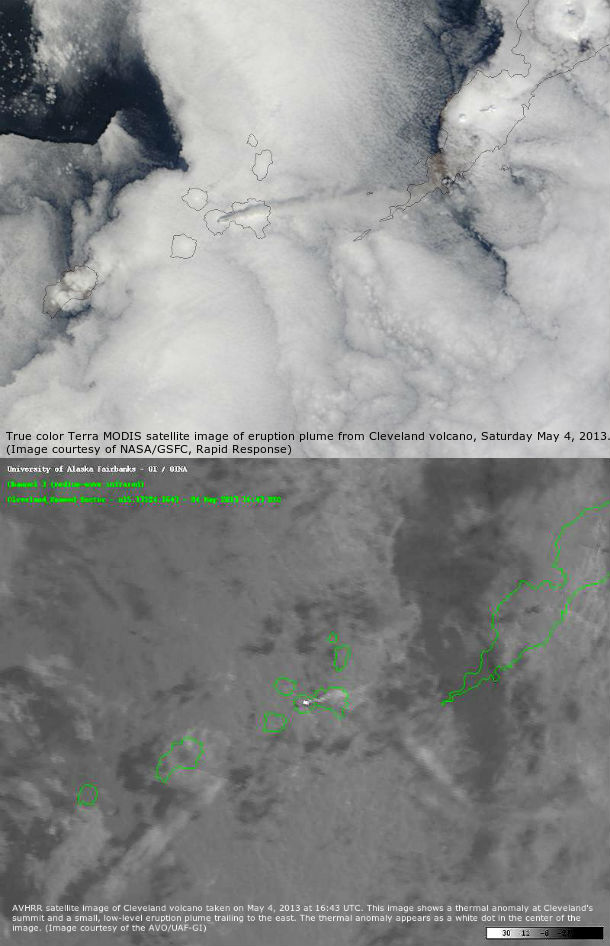 AVO raised Mt. Cleveland’s volcano alert level from Advisory to Watch and aviation color code from Yellow toOrange on  May 4, 2013, after 2-3 short low-level explosions recorded. Orange aviation code means that volcano is exhibiting heightened or escalating unrest with increased potential of eruption and mostly uncertain timeframe or that eruption is underway with no or minor volcanic-ash emissions (ash-plume height specified, if possible).

Sudden explosions of blocks and ash are possible with little or no warning. Ash clouds, if produced, could exceed 20,000 feet above sea level. If a large ash-producing event occurs, nearby seismic, infrasound, or volcanic lightning networks should alert AVO staff quickly. However, for some events, a delay of several hours is possible. Cleveland Volcano does not have a local seismic network and is monitored using only distant seismic and infrasound instruments and satellite data.