NASA Goddard Visualisation Studio released video about state of Arctic sea ice during first three months of 2013. After a record melt season, an Arctic cyclone, and a fascinating fracturing event, Arctic sea ice has reached its maximum extent for the year. According to National Snow and Ice Data Center (NSDIC), Arctic sea ice reached its maximum extent for the year on March 15 at 15.13 million square kilometers (5.84 million square miles). This year’s maximum ice extent was the sixth lowest in the satellite record (the lowest maximum extent occurred in 2011). The ten lowest maximums in the satellite record have occurred in the last ten years (2004 to 2013).


In April 2, 2013 report, NSDIC pointed that Arctic sea ice has passed its annual maximum extent and is beginning its seasonal decline through the spring and summer. Ice fracturing continued north of Alaska, and the Arctic Oscillation was in a strongly negative phase during the second half of the month, with unusually high sea level pressure over almost all of the Arctic Ocean. Levels of multiyear ice remain extremely low. The ice is thinner, and satellite data suggests that first-year ice may now cover the North Pole area for the first time since winter 2008. 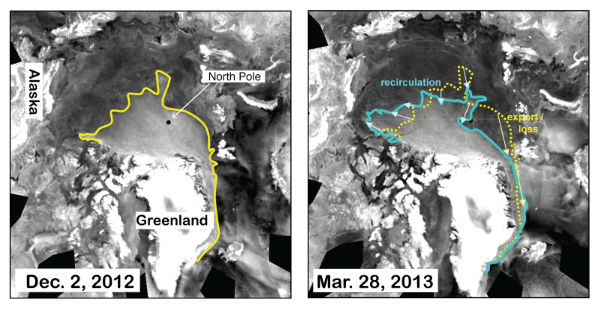 Imagery from the European Advanced Scatterometer (ASCAT) for December 2, 2012 (top) and March 28, 2013 (bottom) show the change in multiyear ice coverage over the winter season, as outlined by the colored lines. In winter, multiyear ice changes are due to the motion of the ice, either export through Fram Strait or redistribution within the Arctic Ocean.
(Credit: Advanced Scatterometer imagery courtesy NOAA NESDIS, analysis courtesy T. Wohlleben, Canadian Ice Service)

Arctic sea ice extent increased 11.72 million square kilometers (4.53 million square miles) between the 2012 summer minimum and the 2013 winter maximum. This was the largest increase in the satellite record. Analysis by Trudy Wohlleben at Environment Canada indicates that multiyear ice is relegated to areas far from the Alaskan and Eurasian coasts. Over the winter, some multiyear ice recirculated into the Beaufort Sea where significant melt of multiyear ice has occurred in recent summers. Also, some multiyear ice has been lost, as it moved out of the Arctic through Fram Strait. The boundary between primarily first-year ice and multiyear ice is now near the North Pole (indicated by the small black circle near the center of the image), marking the first time since the winter of 2008 that a substantial amount of first-year ice may be covering the pole as we enter the melt season.