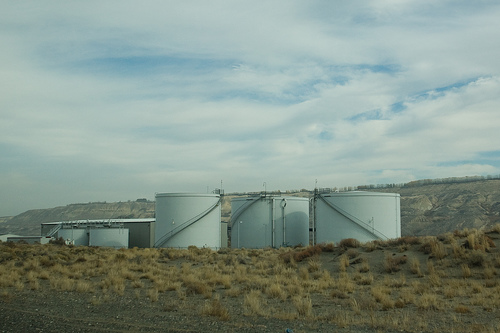 Hanford nuclear site at South-Central Washington state, the now decommissioned nuclear production complex and the most contaminated nuclear site in the United States, is in news again. Despite the radioactive waste stabilization program in 2005 to remove most liquids from vulnerable single-shell tanks, an aging tank has been leaking. This revelation came from federal authorities on last Friday, February 15, 2013 who discovered dip in the volume of toxic sludge in the tank, suggesting leakage of up to 300 gallons a year (1135 litres).

Host to two-thirds of America’s highly-radioactive waste, Hanford project produced plutonium for most of the 60,000 weapons in the U.S. nuclear arsenal during cold war. Established in 1942, this site has been focus of nation’s largest environmental cleanup since post cold war nuclear disarmament initiative. While major releases of radioactive material ended with the reactor shutdown in the 1970’s, parts of the Hanford Site remain heavily contaminated, with known groundwater contamination. A costly cleanup program began in 1988.

This leakage raises question as to how effective has stabilization program been. More than a third of 149 old single-shell tanks at the site are suspected to have leaked up to 1 million gallons of nuclear waste over the years. According to LA Times, data trends showed a decrease in the volume of the tank, and when the accuracy of the measuring instrument was verified, it became apparent that a leak had occurred into the surrounding soil, she said. The estimated volume is 150 to 300 gallons a year. Governor Jay Inslee at news conference said,

“This is very disturbing news. I am alarmed about this on many levels. This raises concerns not only about the existing leak that has been recently discovered, but also concerning the integrity of the other single-shell tanks of this age, some of which have experienced prior leaks.”

Department of Energy at Hanford spokeswoman Lori Gamache said most of tank’s liquids were removed during interim stabilization during 1995, leaving it with 447,000 gallons of sludge. According to officials, exact leakage figures are indeterminable because there is evidence of “water intrusion” into the tank — meaning a bigger leak could have occurred while the volume in the tank remained fairly constant.

State officials deny any possibility of immediate public health threat as it could take years or even decades for the leaked material to reach the groundwater and move on to the nearby Columbia River. Inslee said the timing of the leak’s discovery coincided unfortunately with a report this week from Democrats on the House Appropriations Committee that more than 1,000 federal employees now working on cleanup at the site could be placed on unpaid leave for six weeks if threatened federal budget “sequestration” cuts occurred on March 1. He continued,

“I know this is a time of tight budgets, but with an active leak of high-level radioactive material into the environment, money cannot be allowed to be an excuse for inaction, and the proposed sequestration that we are facing could not have come at a worse time.”

According to Gamache, the waste in that case did not escape the outer shell of the tank and she said, “We continue to monitor it.”

The Hanford Site is a mostly decommissioned nuclear production complex on the Columbia River in the U.S. state of Washington. The site has been known by many names, including Hanford Works, Hanford Engineer Works or HEW, Hanford Nuclear Reservation or HNR, and the Hanford Project.