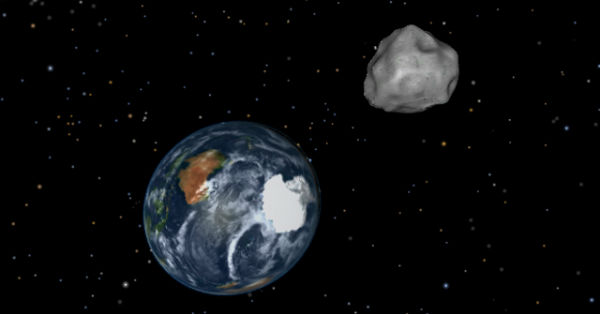 Mark the date – February 7, 2013 at 19:00 UTC (11 a.m. PST/2 p.m. EST). For those of you interested in the closest ever predicted Earth approach for an object of this size, NASA will hold a media teleconference to discuss about upcoming asteroid flyby.

The teleconference participants are:

Audio of the teleconference will be streamed live at: http://www.nasa.gov/newsaudio and http://www.ustream.tv/nasajpl2 . 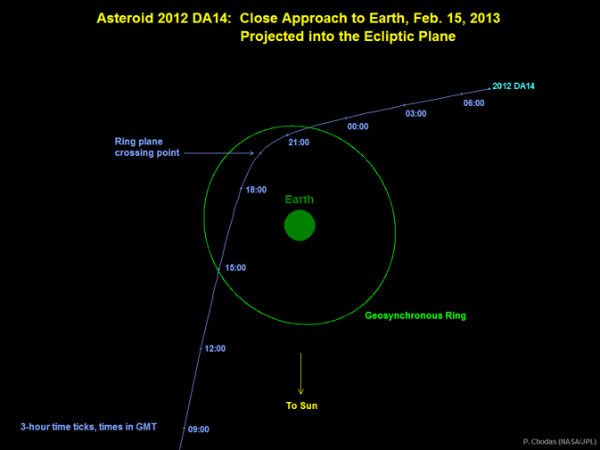 Graphic depicts the trajectory of asteroid 2012 DA14 on Feb 15, 2013. In this view, we are looking down from above Earth's north pole. (Credit: NASA/JPL-Caltech)

With an estimated mass of about 130,000 metric tons and size of 45 meters (150 feet) in diameter, Asteroid 2012 DA14 will pass close by Earth on February 15, 2013 – so close that it will pass inside the ring of geosynchronous weather and communications satellites. Although this will be a record close approach for a known object of this size, there is no risk that the asteroid might be on a collision course with Earth.

Scientists at NASA's Near-Earth Object Program Office in Pasadena, Calif. estimate that an asteroid the size of 2012 DA14 flies this close every 40 years on average and that one will impact Earth, on average, about once in every 1,200 years.

The flyby creates a unique opportunity for researchers to observe and learn more about asteroids. NASA's Goldstone Solar System Radar, located in California's Mojave Desert, will observe the asteroid on Feb. 16, 18, 19 and 20. Due to the asteroid's small size, the radar images generated are expected to be no more than a few pixels across. It will also be observed by numerous optical observatories worldwide to attempt to determine its spin rate and composition.