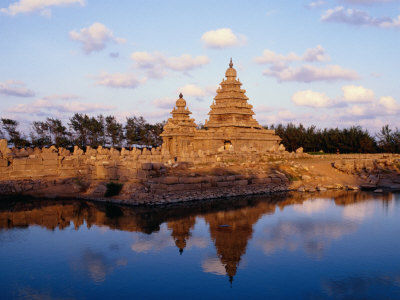 Sea water gushed inland for about 75 metres, leaving behind a pool of water. The temple town was virtually empty with more than 3,000 shops downing shutters to protest an Archaeological Survey of India (ASI) proposal to take over an ancient Perumal temple in the town.

Perumal – “Preserver of the Universe”; name for Vishnu known in Tamil.

While there were no casualties, the waves triggered memories of the 2004 tsunami when the temple town was badly hit. “Tuesday’s waves were a reminder of the tsunami. We were scared when we saw the tall waves. Fortunately, all shops were closed,” said V Balan, a member of the Mamallapuram Traders’ Association.

The high waves, ASI sources said, started on Monday evening and continued all through Tuesday before resulting in a deluge in the evening. As a result the ASI is contemplating banning entry of visitors on Wednesday to the shore temple. However, oceanographic experts have been quick to reassure that the big wave is not the result of a tsunami.

“This is just a local phenomenon and possibly a freak phenomenon caused by low pressure,” said Dr. M A. Aatmanand, director of National Institute of Ocean Technology, for The Times of India.

Mamallupuram erupts in protest against government proposal to take over temple

If one thing that unites all political parties in Tamil Nadu, it is heritage. Opposition is building up against the proposal by the Archaeological Survey of India (ASI) to take over the Pallava era Sri Sthalasayana Perumal temple at the world heritage site in Mamallapuram, 60km south of Chennai. In a show of solidarity against the take over, people hoisted black flags atop houses, shops and other buildings in Mamallapuram.

Tuesday’s reaction by the locals is the first step in a series of events decided at an all-party meeting held at the sea port town a few days ago. At the meeting, all political parties including arch rivals DMK and AIADMK agreed to act together against the takeover of the temple by ASI. Traders will shut all 1,000 shops located on the six main roads including the busy Beach Road on June 19. This will be followed by protests and rally by residents, shopkeepers and traders within the town on June 28 (more on protests here). 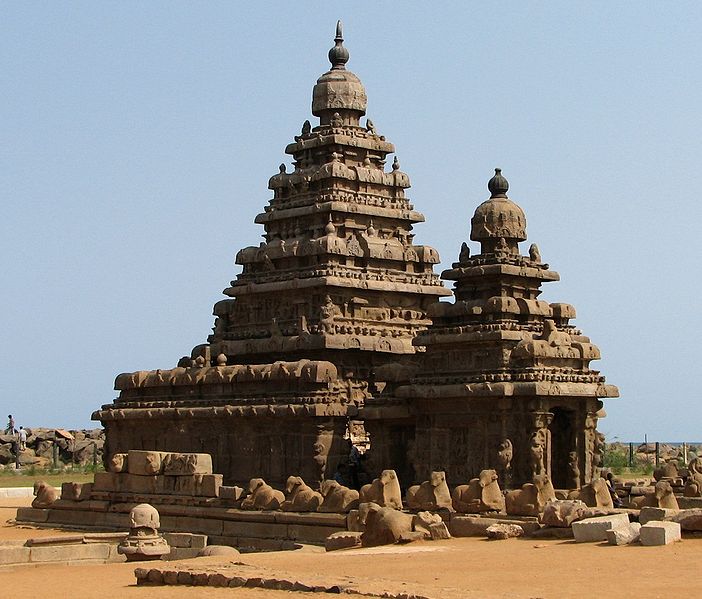 The shore temple (built in 700-728 AD) is so named because it overlooks the shore of the Bay of Bengal. It is a structural temple, built with blocks of granite, dating from the 8th century AD. It was built on a promontory sticking out into the Bay of Bengal at Mahabalipuram, a village south of Chennai in the state of Tamil Nadu in India. The village was a busy port during the 7th and 8th century reign of the Pallava dynasty during the reign of Narasimhavarman II.

As one of the Group of Monuments at Mahabalipuram, it has been classified as a UNESCO World Heritage Site. It is one of the oldest structural (versus rock-cut) stone temples of South India.