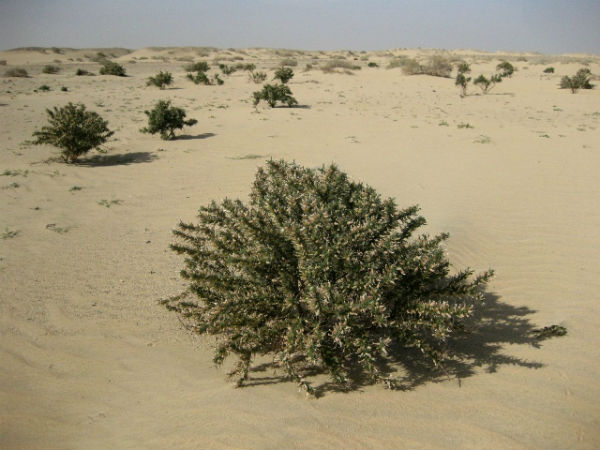 Increasingly frequent sandstorms and salinization of the land is one of major environmental problems of Iraq, where decades of conflict have exacted a terrible environmental toll. The country’s environment ministry estimated in 2009 that 39 percent of Iraq’s surface was affected by desertification, while an additional 54 percent was under threat. And while the ministry estimates that 28 percent of Iraq’s territory is composed of arable land, around 250 square kilometres (96 square miles) are lost every year due to degradation of various kinds.

One Iraqi province is using trees to fight against worsening desertification. Karbala, 110 kilometres (70 miles) south of Baghdad, is the location of a six-year-old project, a “green belt”, or a 27-kilometre crescent lined with thousands of young trees in orderly patterns, irrigated by dozens of wells.

Burned oil wells during the war period poisoned the soil, the water, and led to the disappearance of many plant areas. This has combined with climate change because Iraq has suffered several droughts over the past decade. And while Iraq had started doing its part, neighbouring countries were not pulling their weight, and insisted they had to allocate greater budgets to environmental preservation. Activists point that sandstorms now pose more of a problem than explosions. 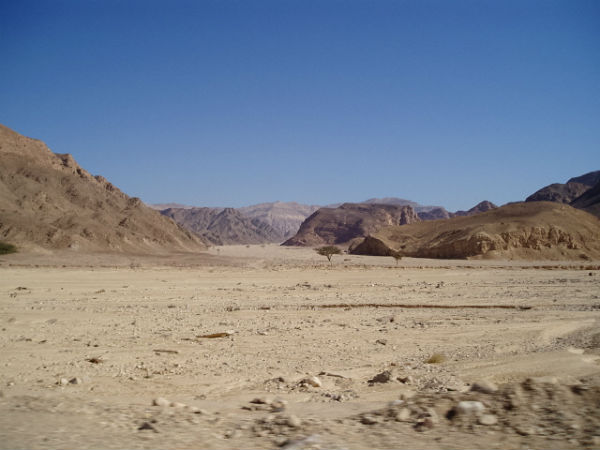 Western and southern Iraq is a vast desert region covering some 168,000 square km (64,900 square miles), almost two-fifths of the country. The western desert, an extension of the Syrian Desert, rises to elevations above 1,600 feet (490 metres). The southern desert is known as Al-Ḥajarah in the western part and as Al-Dibdibah in the east. Al-Ḥajarah has a complex topography of rocky desert, wadis, ridges, and depressions. Al-Dibdibah is a more sandy region with a covering of scrub vegetation. Elevation in the southern desert averages between 300 and 1,200 feet (100 to 400 metres). A height of 3,119 feet (951 metres) is reached at Mount ʿUnayzah (ʿUnāzah) at the intersection of the borders of Jordan, Iraq, and Saudi Arabia. The deep Wadi Al-Bāṭin runs 45 miles (75 km) in a northeast-southwest direction through Al-Dibdibah. It has been recognized since 1913 as the boundary between western Kuwait and Iraq.

Desertification is the degradation of land in any dryland. It is caused by a variety of factors, such as climate change and human activities and is now one of the most significant global environmental problems. The world’s great deserts have been formed by natural processes interacting over long intervals of time. During most of these times, deserts have grown and shrunk independent of human activities. Paleodeserts are large sand seas now inactive because they are stabilized by vegetation, some extending beyond the present margins of core deserts, such as the Sahara, the largest hot desert. The Sahara is currently expanding south at a rate of up to 48 kilometers per year.

Desertification has played a significant role in human history, contributing to the collapse of several large empires, such as Carthage, Greece, and the Roman Empire, as well as causing displacement of local populations.

Drylands occupy approximately 40-41% of Earth’s land area and are home to more than 2 billion people. It has been estimated that some 10–20% of drylands are already degraded, the total area affected by desertification being between 6 and 12 million square kilometres, that about 1–6% of the inhabitants of drylands live in desertified areas, and that a billion people are under threat from further desertification. 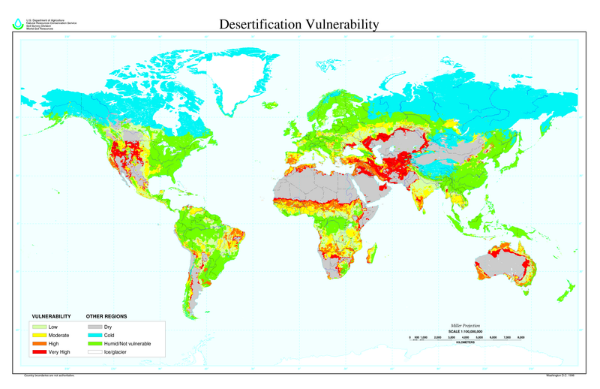 Since the problem is recognized as a major threat to biodiversity some countries have developed Biodiversity Action Plans to counter its effects, particularly in relation to the protection of endangered flora and fauna. Fixating the soil is often done through the use of shelter belts, woodlots and windbreaks. Windbreaks are made from trees and bushes and are used to reduce soil erosion and evapotranspiration. They were widely encouraged by development agencies from the middle of the 1980s in the Sahel area of Africa.